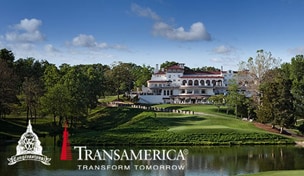 Now that the calendar has flipped to February, the WGT Virtual Tour has moved back across the country, this time using Congressional Country Club as a backdrop for the Transamerica Classic.

Situated just outside the nation's capital, Congressional has hosted the U.S. Open three times, most recently in 2011 when Rory McIlroy lapped the field. The club was established in 1924, with a list of founding members that included former U.S. presidents William Howard Taft and Woodrow Wilson.

Signature holes at Congressional include the par-3 10th, guarded by water in front of the green, and the iconic 18th, whose difficult nature is sometimes masked by the scenic views the hole provides of the clubhouse. The finisher remains a tricky par-4, though, featuring a narrow green and menacing bunkers that punish even the smallest of misses.

While last month's tournament emphasized players' ability to hit accurate approach shots via a closest-to-the-pin format, the Transamerica Classic is a stroke-play event that will test all facets of the game. Tournament participants will have until Feb. 21 to card their best opening-round score, then will have until Feb. 28 to play a second round. While WGT players are afforded an unlimited number of attempts during Round 1, they will have only one crack at Round 2.

The top 70 combined scores from each tier (Pro and higher) will split a prize purse of 200,000 WGT credits.

The WGT Virtual Tour remains open to players of all ability levels. Click here to get signed up before heading to the first tee at Congressional, and remember to keep an eye out for WGT scores scrolling across the ticker on Golf Channel and at GolfChannel.com.