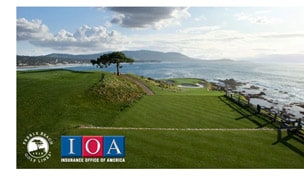 Getty Images
Andres Romero of Argentina plays his second shot to the 17th green during the second round of the OHL Classic at Mayakoba on November 14, 2014 in Playa del Carmen, Mexico. (Photo by Rob Carr/Getty Images)  -

The first tournament of the 2014 season on the WGT Virtual Tour is officially in the books, as more than 75,000 players participated in the IOA Open at Pebble Beach during the month of January.

The tournament utilized a closest-to-the-hole format over two rounds, with players afforded an unlimited number of chances to post a first-round score but only given one attempt during the second round. The list of event winners is headlined by dansamcam, who held onto his first-round lead and went on to claim top honors in the Tour Legend division with a cumulative total of 60.7 feet (25.6 feet in Round 1, 35.1 feet in Round 2). His score put him just ahead of nashkurt who took second place with a 72.8-foot total, while JFHuber claimed third place at 73.1 feet.

Other winners from the first event of 2014 include adrian923 (Legend division, 70.3 feet), keplere (Tour Master, 109.2), Richnow (Master, 135.4), Sorengolf (Tour Pro, 116.7) and Lasmastar (Pro, 144.3). The international appeal of virtual golf was on full display this past month, as division winners hailed from Spain (keplere), Denmark (Sorengolf) and Italy (Lasmastar) in addition to the United States.

The WGT Virtual Tour now heads to Congressional Country Club, site of the 2011 U.S. Open and host to this month's Transamerica Classic. Play is now open for the event, which will utilize an 18-hole, stroke-play format, and players can again take a shot at the 200,000 WGT-credit prize purse, with each player's cumulative earnings for 2014 used to determine who qualifies for the Virtual Tour Championship in December. Click here to get signed up and head to the first tee at Congressional!