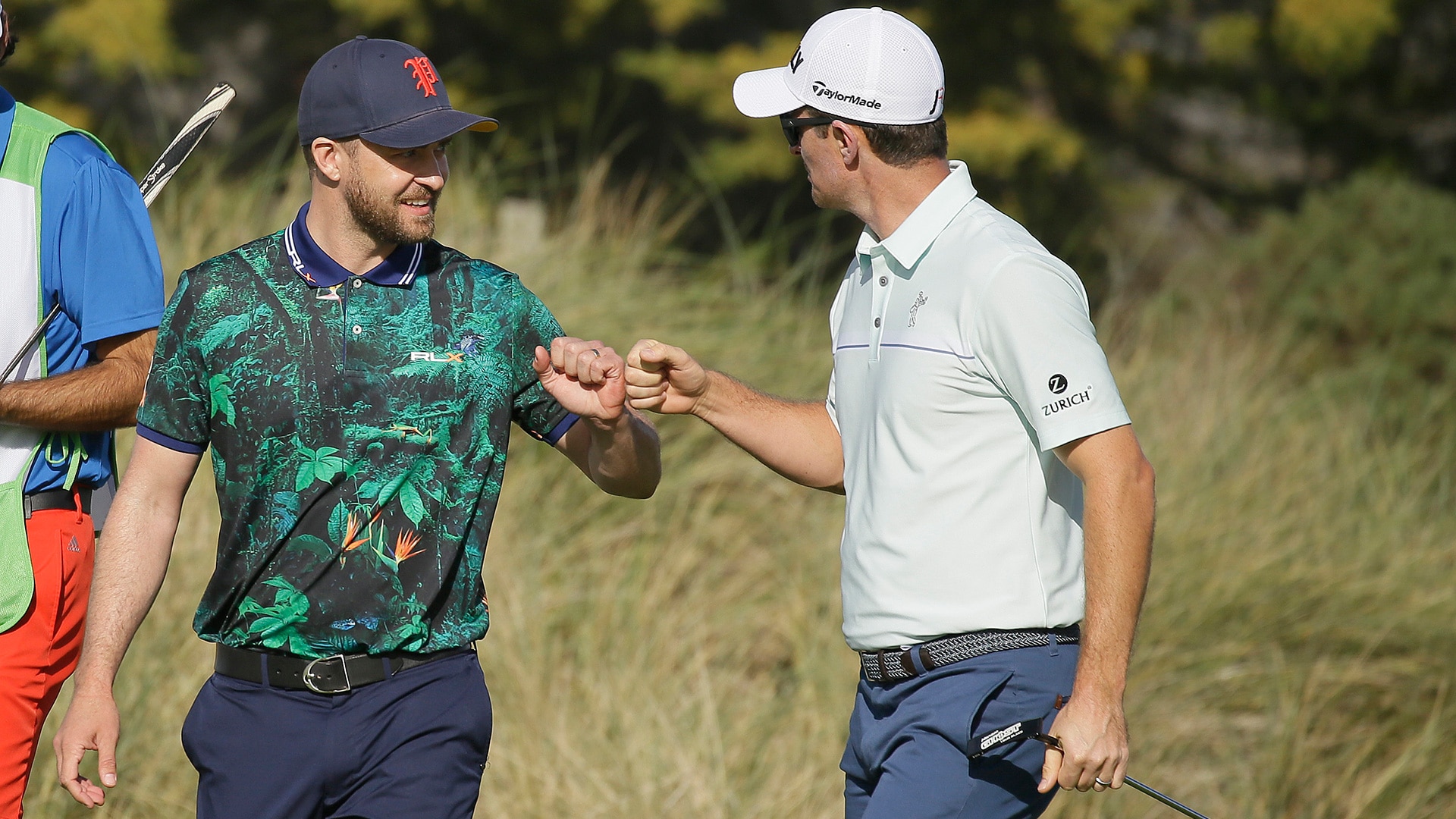 PEBBLE BEACH, Calif. – The path from the 18th green at Spyglass Hill to the parking lot behind the clubhouse is about 100 yards, a circuitous route that this week is lined with plenty of star-struck fans.

By the time he reached the end of that winding trail Thursday, Justin Timberlake still had chants of “Justin!” and selfie requests ringing in his ear.

It’s nothing new for Timberlake, but this particular afternoon the standard roles of star and fan were reversed. It was Timberlake, the all-world entertainer with more than 51 million Twitter followers, who couldn’t get his mind off the golfing spectacle he had just witnessed.

The stud in question was none other than Justin Rose, Timberlake’s partner at this week’s AT&T Pebble Beach Pro-Am. A strong opening round for a world-class player, sure, but it was even more remarkable considering that Rose has never been to Pebble Beach before.

As a 35-year-old U.S. Open champ, a professional golfer for nearly two decades, Rose has never before played in this event, and he hadn’t set foot on Pebble’s hallowed ground until Wednesday’s practice round.

He hadn’t even been here for the 2010 U.S. Open, when he famously won the Memorial just weeks prior but still didn’t qualify.

“I feel like me and Pebble just haven’t quite gelled yet,” Rose said.

So far, that gelling process is off to a pretty decent start.

Rose capped his opener with a 50-foot birdie bomb on his final hole, a putt that briefly turned the brunt of the attention back to the seven-time PGA Tour winner rather than his more popular partner.

It was Timberlake, after all, who even got Rose to this event in the first place. The friendship between the two has flourished in the Bahamas – Timberlake’s wife, actress Jessica Biel, followed part of the round in a camouflage hat from the Albany Club where Rose calls home. Rose, though, recalled that the two first met while he was still living at Lake Nona in Florida.

“I think it started off with me introducing myself to him,” Rose said. “The second time I met him, he absolutely remembered that meeting and, hey, it’s all gone from there.”

This week’s event presents a unique dynamic as celebrities collide with golfers on their home turf. It’s one that Rose has opted to embrace, understanding that a majority of the calls for “Justin!” are directed at his playing partner – arguably the biggest name in the amateur field.

“I was getting probably a 10-to-1 ratio to Justin,” Rose recalled. “Just depends on how you want to view them. I said earlier in the week that I was going to feed off that energy and own those ‘Justin’ shots.”

It sounds like a novel plan, but even Rose was taken aback by the crowd reaction a few times during the round. Timberlake took center stage behind the 16th tee when he played an impromptu song using a guitar furnished by one of the neighboring houses, and the crowd had turned decidedly younger by the time the group reached their final hole early in the afternoon.

“The 17th (green) to the 18th (tee) is quite a steep climb, and I’ve never seen a demographic like that on a golf course, where you’re sort of running the gauntlet from one tee to the other,” Rose said. “Everyone was under 21 and 80 percent female. I said ‘OK, that moved the needle a little bit there.’”

Often placid and reserved inside the ropes, Rose seems plenty comfortable this week amid an environment that can be an acquired taste. Making just his second start of the year, he is well-rested and more importantly swinging free – a trend that coach Sean Foley hopes will continue.

“He’s been working with me and Jason Goldsmith on really trying to get to where he frees it up and trusts his instincts more than his technique,” Foley explained. “I think that if he can do that well, that’s that next level.”

Those sentiments were echoed by Foley’s pupil after an opener that included seven birdies and put Rose just two shots off the early pace, having knocked the hardest course of the rotation off his list.

“I’ve been working pretty hard on my game, especially early in this week,” Rose said. “It still hasn’t clicked, I still don’t feel 100 percent comfortable, and I had to remind myself before I played today that I’m out here to have fun as well. And I think that that little sort of mental adjustment helped free me up and play a better round.”

Rarely do PGA Tour pros play a competitive round on a course they haven’t seen before, but such was the case for Rose at Spyglass Hill. He played practice rounds earlier in the week at both Pebble Beach and Monterey Peninsula, but only had a chance to walk a few holes at Spyglass with his caddie to ascertain sight lines.

So much for that theory that course knowledge is a requirement.

“Sometimes, who knows, this can be an advantage,” Foley said. “It’s like you’ve never hit a bad shot on the course. You’ve never made double on that one hole two years ago that you still remember.”

It may have taken him a while to reach this famed patch of California coast, but Rose now feels right at home. Should this level of play continue, there’s even a chance that a few of those “Justin” chants will be meant for him before it’s all said and done.