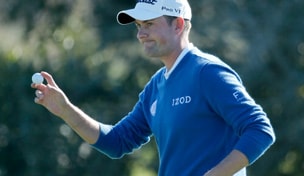 Getty Images
Without a doubt, the most defining moment in Phil Mickelson’s career came at the 2004 Masters, when he finally broke through to win his first major. On Easter Sunday, Mickelson wasn’t about to let past letdowns continue to define him. Midway through the final round it looked as if the tournament was in doubt for Mickelson as Ernie Els had stormed into the lead with a 67 in his final round. However, after playing his final seven holes in 5 under par and sinking a lengthy birdie putt at No. 18, Mickelson finally became a major champion. (Getty)  -

ST. SIMONS ISLAND, Ga. – Gusty winds. Ballooning scores, with par becoming a highly prized goal. A largely frustrated field, featuring as many rounds of 78 and higher as 67 and lower.

At first glance, Friday’s second round of the McGladrey Classic felt more like a day at the U.S. Open than one at a PGA Tour stop that yielded a 10-under 60 to its winner a year ago.

It’s not surprising, then, that Webb Simpson finds his name near the top of the leaderboard.

A winner of the season’s second major a year ago, Simpson displayed the tee-to-green consistency that earned him the trophy last year at Olympic Club, carding a 2-under 68 Friday despite the taxing conditions. At 7-under 133, he sits just one shot off the overnight lead of Chris Kirk, who reached 8 under following a second 66.

“I knew before I played I would take anything under par,” Simpson explained after a round that included three birdies and just one bogey. “As the day wore on, the wind started to decrease, but it was great to get a couple under and still be right there in the tournament.”

Faced with swirling winds that at times blew in excess of 30 miles per hour, Simpson produced a second round that was borderline clinical. As many players fell off the pace, including overnight leader George McNeill who followed up a 62 with a 76, Simpson wore down the Seaside Course one green in regulation at a time.

For the four-time PGA Tour winner, the key to second-round success was formulating a plan of attack before the first shot was struck.

“We had a good game plan, and it really didn’t change much,” explained Simpson, who reached 14 of 18 greens in regulation and didn’t drop a shot until a bogey on the penultimate hole. “You have to game-plan before the round on club selection, so you don’t get to a hole where you’re shocked or don’t know what to do.”

Having spent the last two weeks at home with his family, Simpson shows no signs of lingering rust as he looks to string together a third straight high finish. After closing his 2013 season with a fourth-place showing at the Tour Championship, the 28-year-old broke a 16-month winless drought in his most recent start at last month’s Shriners Hospitals for Children Open.

Now aiming for two wins in a row, Simpson is no stranger to capitalizing on a lengthy stretch of good form. His most recent start in this event came during his rookie year in 2011, when he came to the Seaside Course having captured his first two PGA Tour titles at the Wyndham Championship and Deutsche Bank Championship in the preceding months.

That week nearly saw the then-26-year-old hoist his third trophy of the year, as Simpson ultimately fell in a playoff to Ben Crane.

Now on the precipice of another break from competition as the calendar year winds to a close, Simpson admitted Friday that he plans to take advantage of the scheduling flexibility created by his win at TPC Summerlin as the Tour embarks on its first wraparound season.

“I like the venues we’ve played,” he joked when asked his thoughts of the 2013-14 cross-calendar slate. “Playing well in Vegas is going to let me play a little bit of a lighter schedule once we get to the West Coast.”

Before that, though, there’s unfinished business at Sea Island. Simpson was able to grind to within a shot of Kirk’s lead through 36 holes, but he sits there alongside three other players, including John Senden, who completed his second-round 67 in near darkness after the horn blew at 5:38 p.m. ET to suspend play for the day.

In total, 21 players will wake up within four shots of the lead on a course that is likely to return to yielding birdies once the wind abates.

“We’ve got a lot of golf to play, with a lot of good players right there,” said Simpson. “The leaderboard seems bunched, so I’ve got to continue to go out and play good golf.”

Though the benign conditions of Thursday are likely a thing of the past, the winds along the Georgia coast this weekend are not expected to mirror those seen for much of the day Friday.

Having survived the toughest conditions the Seaside Course had to offer, Simpson now finds himself halfway home to a second victory in as many starts, with the new season still in just its second month. Should his tee-to-green accuracy remain intact this weekend, it could prove to be his title to lose.