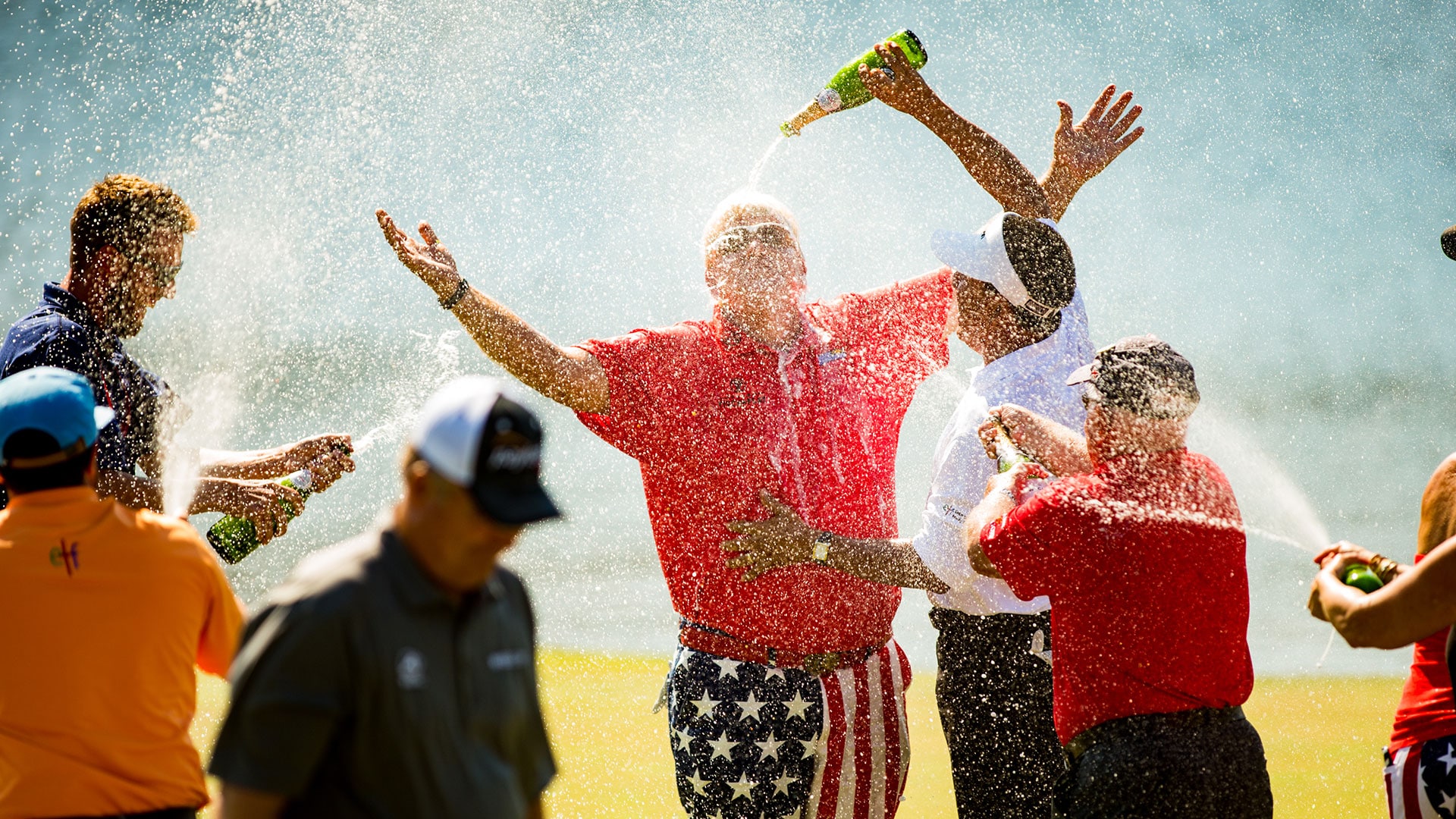 Ok, time’s up. And no, Bernhard Langer didn’t sweep every title.

But ask a casual golf fan about the over-50 circuit in the coming days, and he’ll let you know that John Daly is once again relevant after hanging on for a one-shot win at the Insperity Invitational.

The victory comes exactly a year after Daly made his Champions debut, and it gives the tour the much-needed jolt in the arm that his presence was expected to provide. Daly was surprisingly quiet last year, rarely contending and failing to quickly transition into success like many of his predecessors did upon turning the big 5-0.

But then came Sunday’s round outside Houston, and we were reminded how and why Daly has captivated audiences over the last 26 years.

Granted, it wasn’t pretty and didn’t exactly go according to plan. Few things with Daly ever do. He led the whole day but bogeyed each of his final three holes, essentially running out of time in his effort to hand the trophy to Tommy Armour III.

Despite his stumble to the finish line, there was Daly – clad in stars-and-stripes pants, celebrating his first victory since the 2004 Buick Invitational. A man who has been through the wringer bent down and kissed an umbrella logo in the 18th fairway, an homage to Arnold Palmer and another example of why fans so often blindly back him through both ups and downs.

“For me it’s like, you know, some guys come out here and win right off the bat, get the monkey off their back,” Daly said. “But now I can say I’m a champion on the Champions Tour, which is really cool and hopefully I can keep this confidence going.”

Daly has spent his entire career resonating with the everyman like few golfers outside of Palmer ever have. Since his breakthrough at the 1991 PGA Championship, the masses have cheered his fleeting success and sympathized with the demons that more often held him back.

Little has changed about that relationship in the intervening decades, and Sunday’s victory is cause for celebration for the many who have remained in his corner since he faded from relevance more than a decade ago. There goes Long John, victorious once more, the legend who once overpowered the game and whose success now elicits a flood of nostalgia.

The person cheering the loudest Sunday may have been PGA Tour Champions president Greg McLaughlin. Every few years the circuit has been blessed with a player whose star-power and resonance with the casual fan can draw thousands of eyeballs, but none have surfaced since Fred Couples turned 50 in 2009. Daly was thought to be just such a figure, and now it appears he may still achieve that status despite a middling rookie campaign.

Whether Daly can sustain his newfound success against his aging competition remains to be seen, but frankly it doesn’t matter. His rampant popularity has never hinged on a string of top-10 finishes or a run of consecutive sub-par rounds.

Daly’s form is often fleeting, his frustrations always worn on his sleeve. He is one of us, a player who you could just as easily envision saddling up next to you at the 19th hole as hoisting a major trophy.

The Wells Fargo Championship featured an action-packed ending, with several big names vying for the title. The tournament was ultimately decided by a dramatic birdie putt on the 72nd hole.

But somehow, what transpired in Wilmington was outshined by the Insperity conclusion in Texas. A quick scroll through social media around dinnertime Sunday clearly showed that the biggest storyline in golf wasn’t Brian Harman’s second career win.

It was John Daly, the mystifying figure who wears his scars with pride, standing with open arms as his friends and peers doused him with champagne on the final green. Golf’s quintessential everyman was on top of the mountain, and it was a beautiful sight to behold.

“I just want a Miller Lite,” Daly said afterward. “That’s all I want.”

It’s the type of role reversal the Champions circuit has always envisioned, and one that few players could ever deliver. But Daly has always had a penchant for stealing the show, and that flair didn’t disappear when he turned 50.