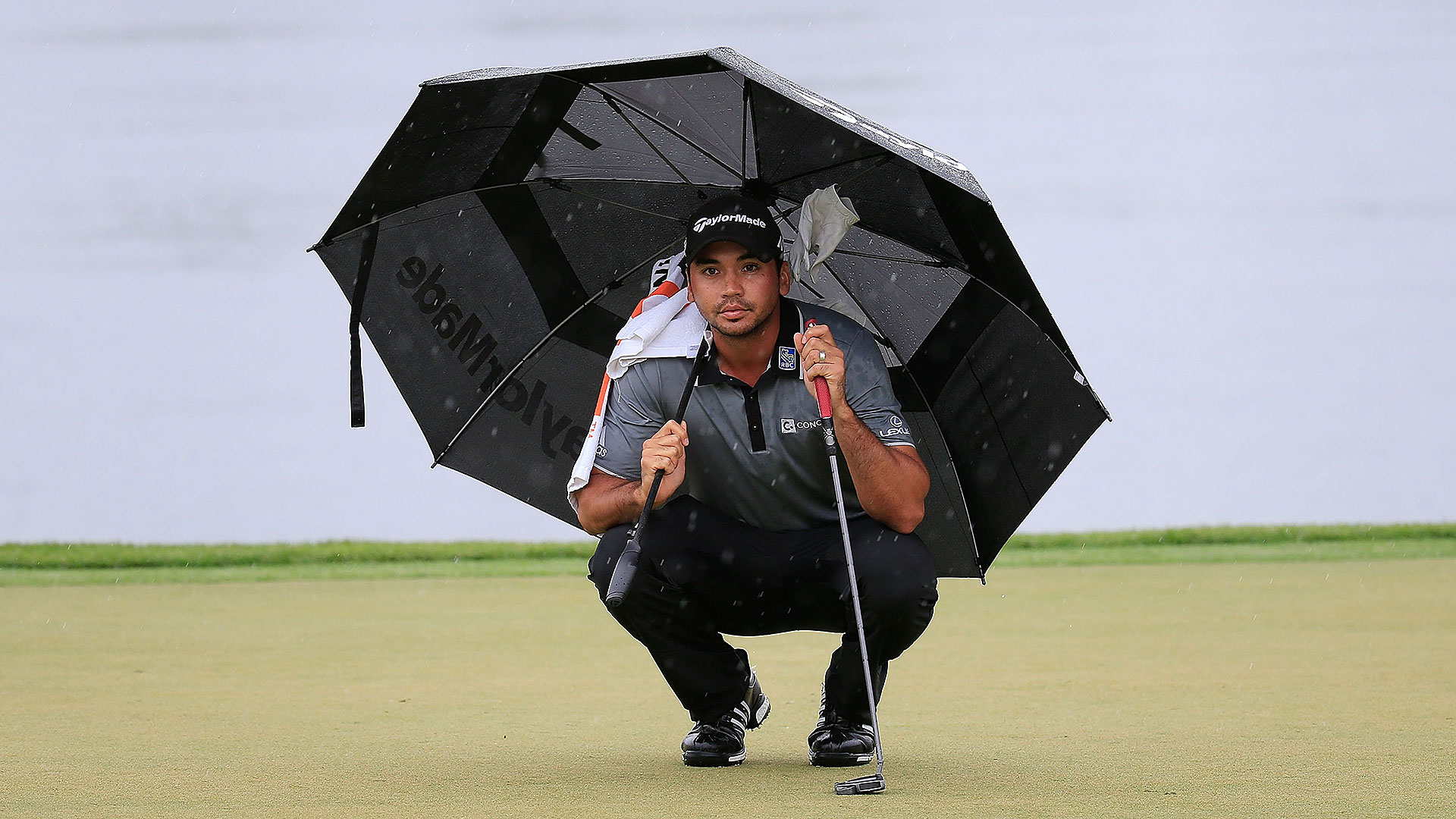 ORLANDO, Fla. – Two years have passed since Tiger Woods last struck a shot at the Arnold Palmer Invitational, but his mark on Bay Hill remains unmistakable.

He won eight times after all, including each of the last two times he played here. Seemingly every corner of the par-72 layout is dotted with heroic shots that he attempted and, in most cases, pulled off successfully – none moreso than the 18th green that he once turned into his personal arena.

It’s fitting, then, that as Jason Day looks to close out a wire-to-wire victory this week, he will do so relying on Woods’ advice – not to mention his trademark gameplan.

Day began the third round with a two-shot advantage, and a lengthy round amid sloppy conditions clearly took a physical toll. But a 2-under 70 allowed him to maintain his cushion, and at 15 under he sits two shots clear of a trio of players as he looks for his first win since September.

Day and Woods are friends and frequently text one another. Those consults have led Day to adopt a two-pronged approach this week: patience and aggression. Pick your spots, make your moves, and play safe the rest of the way.

“Sometimes that’s what you need to do to win golf tournaments, especially when you have the lead,” Day said. “That’s what he’s done around here, and won so many times, doing it with that exact piece of advice that he’s given me.”

It’s a plan that has been evident all week, and certainly played out amid the rainy slop of the third round. Day has crushed the par-5s, playing them in 11 under through three rounds, and his only back-nine birdie came from a two-putt on the par-5 16th.

The rest of the round, outside of a pair of bogeys, was a textbook demonstration in protecting a lead: hit the greens, take your pars and make everyone else catch you.

It’s a strategy that Woods has employed throughout his career, one that forces the opponent to make the first move – and, hopefully, the first mistake. Day admits to thinking often of Woods’ counsel while on the course, and he has put it to great use through 54 holes.

“Patience and aggression is what he says, and extend the lead by one, two shots every day,” Day said. “And pretty much, if it’s not going your way, suck it up and get it done somehow. And that’s just a typical Tiger Woods comment right there.”

Day is familiar with the burden of a wire-to-wire attempt; his win at the BMW Championship is both his most recent victory and the last time a Tour player pulled off the feat. That win at Conway Farms capped a torrid summer for the Aussie, one that saw him win a major and get to world No. 1.

The confidence he gleaned from that stretch, not to mention the near-misses that preceded it, make him better equipped for the spotlight than he might have been just two years ago.

“I probably would have choked,” he said. “I may choke in the future as well but like, that’s just how it is. You learn and you get better and, unfortunately, those times when you do play bad and you don’t win, that’s when you learn the most.”

While Day has converted each of his last three 54-hole leads, this tournament has not been kind to leaders in recent years, especially ones not named Woods. Should Day falter, a trio of players sit just off the pace, headlined by Henrik Stenson, who has some unfinished business to settle at Bay Hill.

Stenson held the 54-hole lead last year but succumbed to a late charge by Matt Every, one of five worldwide runner-ups last year for the Swede who remains winless since 2014.

“I played all right last year, but I didn’t get it finished,” Stenson said. “Hopefully we’re in a different position now. We need to come from behind and play a really good round tomorrow if we want to have a shot at it.”

Tied with Stenson at 13 under are Troy Merritt and Kevin Chappell, not exactly household names. But neither were Every, Martin Laird or Rod Pampling – all API champs within the last 10 years.

For Chappell especially, it’s a chance to follow in Every’s footsteps by claiming his maiden Tour victory in front of a living legend.

“I know not a lot of people in here expect me to win tomorrow, but I’m sure going to give it a shot and we’ll see what happens,” Chappell said. “It’s something I’ve thought about thousands and thousands of times, and I could see myself doing it. It’s just a matter of going out and doing it, and I can’t think of a better place to get my first win.”

But the man to beat, as has been the case all week, will be Day. Somewhat overshadowed by the recent play of other top-ranked stars, he hopes to put to rest any discussion of his recent slow start.

Equipped with the strategy Woods perfected at Bay Hill, he also hopes to firmly stamp his name as one of the favorites for the quickly-approaching Masters.

“If I can scratch out a win tomorrow, it’s going to do wonders for my confidence, knowing that I’ve held the lead every single day, won wire-to-wire,” he said. “It’s perfect timing with what’s coming around the corner.”