Everything finally falling into place for Johnson 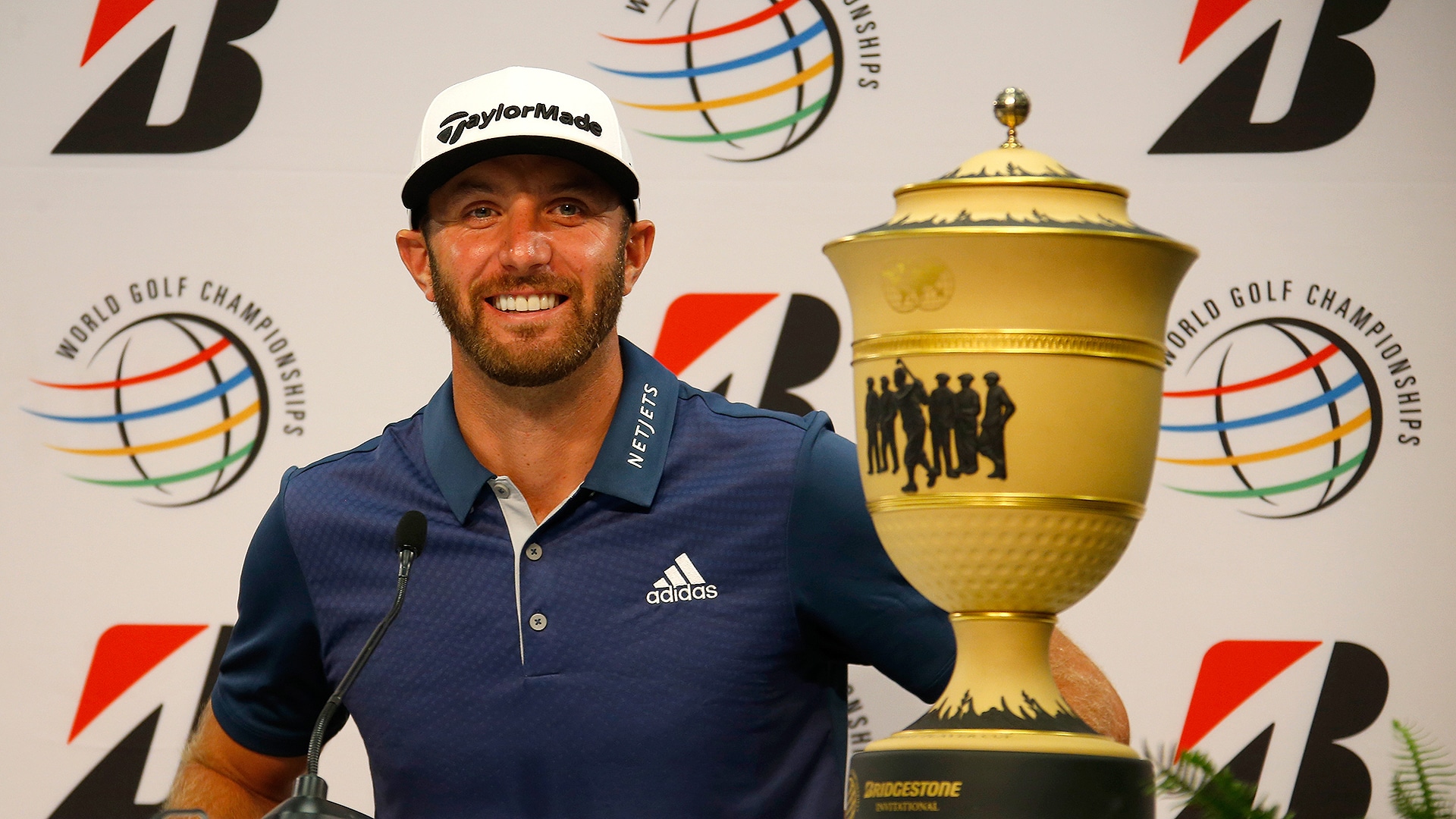 AKRON, Ohio – Little things have finally begun to add up in a big way for Dustin Johnson.

He’s been lurking all season long it seems, just off a bit in the distance. While Jason Day and Adam Scott and Jordan Spieth received a bulk of the attention with early wins, Johnson logged his T-8s and T-12s and went about his business, waiting for everything to fall into place.

Consider that wait over.

Johnson rallied from a three-shot deficit in the final round to win the WGC-Bridgestone Invitational, toppling the world No. 1 in the process. After waiting 15 months in between wins, he now has left with the trophy each of the last two times he has teed it up.

The source of his recent run, according to Johnson, is rooted in the small stuff.

A draw off the tee stopped cooperating late last season, so Johnson decided to switch things up. He adopted a power cut shot – emphasis on power – and has never hit the ball better, or straighter, off the tee.

The putter, which so often has been his nemesis in recent years, has officially come around. Never was that more evident Sunday than on the 17th green, when he poured in a 16-foot birdie that gave him the lead.

Oh, and those wedges have begun to cooperate, too – an important factor for a guy who hits plenty of them and now leads the PGA Tour in proximity from 50-125 yards.

“He won for a reason,” said Scott Piercy, who finished second to Johnson for the second straight event. “That’s pretty awesome. We all know how good DJ is, and he’s shown it in the last two weeks.”

If there was any sort of secrecy surrounding Johnson’s sudden return to form, the secret is out. His U.S. Open victory moved him past Rory McIlroy in the world rankings, and this latest trophy edged him ahead of Spieth to a career-best No. 2 in the world.

Day’s name may still be ahead of his, but there’s no question as to who the hottest player in the world is after the finish in Akron.

“I feel like if I’m hitting it in the fairway, I’m going to be very tough to beat,” Johnson said. “The last couple weeks my putter, I’m making the putts I’m supposed to make. That’s the big difference in me finishing a lot of top-5s that I’ve had this year to winning a few.”

Johnson appeared notably more relaxed throughout this week. Winning a major, and bringing to a screeching halt the incessant line of questions about when you’ll win one, tends to help loosen things up.

But he’s also a different man off the course than he was even a couple years ago thanks to his son, Tatum, who he had with him throughout the weekend with fiancée Paulina Gretzky out of town since Friday.

It’s a transition many elite players have undergone before him, but fatherhood appears to have centered Johnson both inside and outside the ropes.

“I mean, golf isn’t the most important thing anymore,” he said. “I don’t know if that helps or hurts, or what. But he’s most important, and whether I shoot a good score or a bad score, when I see him, it doesn’t matter.”

Thankfully for both father and son, there haven’t been many bad scores to work through in recent weeks.

In the span of a less than a month, Johnson has done more than just shed the label of an underachiever on the major stage. He has stamped his name as one of this generation’s most prolific winners, now with a major and three WGC titles among his 11 Tour victories.

He has also now demonstrated a consistent ability to come from behind, even against the world’s best. Johnson’s 2015 win at Doral saw him erase a five-shot deficit during the final round, while his two wins this summer have been from four and three shots back, respectively.

With so much focus on who can close the best, and whose record with the 54-hole lead is the most impressive, Johnson’s no-nonsense approach has proved effective at chasing down leaders with increasing regularity.

Johnson has been viewed as one of the Tour’s most physically gifted players for years, and he has turned those gifts into a fair number of wins.

But suddenly, with the convergence of a number of little factors both on and off the course, he’s peaking at just the right time. He has reached heights unprecedented in his nine-year career, and it appears to have only fueled his appetite for more.

“The goal is to get to that No. 1 spot. I’ve still got a lot of work to do to get there,” he said. “It’s not just getting there, you want to stay there. I’m looking forward to the challenge.”