For first time, Masters invite on the line at McGladrey 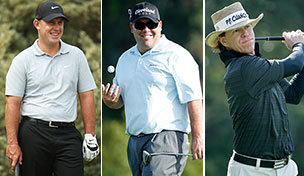 <font color=black><b>Missed Cuts:</font></b> 0
<p>Woods started the season with three impressive wins, but the story of the year came at the U.S. Open. Woods defeated Rocco Mediate in a 91-hole marathon that went to a sudden-death playoff for his 14th and most recent major championship. It was revealed afterward that he had a torn left ACL and a double stress fracture in his left tibia. Woods called it his "greatest ever championship." He missed the rest of the season after undergoing surgery.</p>  -

ST. SIMONS ISLAND, Ga. – A drive across the state of Georgia from Sea Island Golf Club to Augusta National would, depending on traffic, take just under four hours. It happens to be a journey that a McGladrey Classic champion has yet to take based on his victory at the Seaside Course.

That all changes Sunday.

With the event now integrated into the PGA Tour’s 2013-14 wraparound schedule as a full-fledged FedEx Cup event, tournament officials will be able to hand an invitation down Magnolia Lane to their winner Sunday in addition to the trophy and $990,000 first-place check.

For a player like Kevin Stadler, a spot in the field at Augusta National serves as extra motivation as he looks to join his father, 1982 Masters winner Craig Stadler, for a trip around Amen Corner next April.

“You think about it, sure,” said Stadler, who sits one shot off the lead after a Saturday 65, firmly entrenched on a crowded leaderboard that lists 12 players within four shots of the lead heading into the final round. “It’s not necessarily something on the forefront of my mind, though.”

Still in search of his first PGA Tour victory, Stadler nearly earned a spot in the 2014 Masters field by making it to the season-ending Tour Championship this fall. His run through the FedEx Cup Playoffs came up just short, though, as the 33-year-old finished the season 33rd in points when only the top 30 players advanced to East Lake.

“I certainly thought about it this past year,” Stadler said of potentially joining his 60-year-old father for a competitive round at Augusta National. “I’d obviously love to get there while my dad is still playing, which is getting shorter and shorter by the year.”

The lure of the Masters is also strong for Scott Brown, who called Augusta, Ga., home as a child.

Though he won earlier this year, Brown’s victory at the Puerto Rico Open did not bring with it a Masters invite because of its position on the schedule opposite the WGC-Cadillac Championship. Having attended at least 10 Masters tournaments alongside his grandfather in the late 1980s and 1990s, Brown now finds himself at 8-under 202, two shots off the pace heading into the final round at Sea Island and on the cusp of his first trip inside the gates as a tournament participant.

“Absolutely, yes. I’d be lying if I said I didn’t think about it,” Brown explained after a third-round 68 moved him into a tie for sixth. “We know what kind of benefits we get from winning. Obviously, I’d love to play there, being in my own backyard.”

Holding a share of the tournament lead through 54 holes, Briny Baird has made a pair of Masters appearances, most recently in 2009. While a return to Augusta National remains enticing, Baird’s larger focus is on claiming his maiden victory in this, his 365th career PGA Tour start.

“I know I can do it,” explained Baird, who has compiled $12,699,237 in career earnings – the most for any active player without a win to his credit. “Knowing you can do it and doing it are two different things.”

Five times a runner-up, including a playoff loss at the 2011 Frys.com Open, Baird believes the difference between winning and losing is mental.

“I’ve always said Tiger Woods wasn’t 80 PGA Tour wins physically better than me. There’s a mental capacity that’s in there,” said Baird, who is playing this season on a major medical extension after surgeries to both of his shoulders in 2012. “It’s just not possible to be 80 PGA Tour wins better physically, so it’s obvious there’s some mental in there ... It’s mostly mental I would say, actually.”

Joining Baird in Sunday’s final group will be Chris Kirk, who has yet to make the field at the Masters, though he does have the PGA Tour title that Baird covets. Kirk won the 2011 Sanderson Farms Championship, but that win – like Brown’s victory this year in Puerto Rico – did not bring with it a spot at the season’s first major.

At 10-under 200, the 28-year-old shares the lead with Baird heading into the final round, one that he expects to be highly competitive.

“It’s sort of anybody’s game,” explained Kirk, who was a member at Sea Island before relocating to the Atlanta area earlier this year. “Obviously I’m happy to be tied for the lead right now, because that’s one less shot that I’ve got to go get tomorrow.”

With the first seven names on the leaderboard separated by just two strokes, the fourth installment of the McGladrey Classic remains largely unpredictable. What’s certain, though, is that the eventual champion will be able to make the short drive from St. Simons Island to Augusta and, upon arrival, finally watch the gates swing open based on the merit of his win.