Furyk trying to end drought on a course he loves 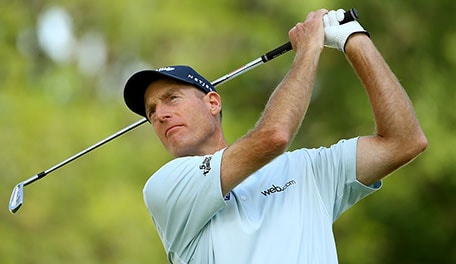 AKRON, Ohio – When you stop and think about it, it makes sense that Firestone Country Club and Jim Furyk would get along.

Both are straightforward and old-school. No pretense, no fancy accoutrements. What you see is what you get. A blue-collar course for a blue-collar player.

The affinity between the two parties goes back nearly two decades, and this week Furyk is once again firing on all cylinders at a course he dearly loves.

While many players have been humbled this week by Firestone’s firm conditions and penal rough, Furyk appears to be playing a different golf course. He has shot back-to-back rounds of 66, with 13 birdies through 36 holes on a track where mere mortals – not to mention Jordan Spieth – have simply sought to remain around par.

Furyk built a six-shot lead at one point during the second round, and he will head into the weekend as the man to beat.

“It’s not an easy golf course, even though Jim made it look easy,” said Henrik Stenson, who played the first two rounds alongside Furyk and trails by five shots. “He was leaving everyone behind, at least the morning groups.”

Furyk has played well before in this event, with top-15 finishes in four of the last five years, but his two best performances here both ended in frustration.

The first came in 2001, when he and Tiger Woods dueled in an epic playoff. Furyk holed a greenside bunker shot on the first extra hole to simply extend the proceedings, but Woods ultimately won on the seventh extra hole. Then in 2012, he appeared to have both hands on the trophy before a double bogey on the final hole abruptly handed it to Keegan Bradley.

Furyk said he is “disappointed” to have never won at Firestone, one of his favorite courses, but he is in ideal position to change that this weekend thanks to a gameplan that relies on his strengths and accepts his limitations.

In a sport where players sometimes try to re-invent their games with the changing seasons, Furyk has grown comfortable in his own skin at age 45, even if that means losing ground off the tee to some of the bombers on Tour.

While he has averaged 279 yards per drive this season, good for 170th on Tour, Furyk has picked up more than 15 yards per tee shot on the firm fairways this week. For him, the harder the course, the better.

“I like to see the golf course firm,” Furyk said. “It plays that much shorter, but it’s that much harder to hit the fairways and I think that, when I’m playing well, that falls into my strengths.”

“Even though it’s normally a long golf course, and he’s not the longest hitter, he hits a lot of fairways and he’s putting beautifully, and the short game is sharp as always,” added Stenson. “He’s definitely taken advantage of those conditions.”

Furyk admitted after the round that his narrative has taken a much-desired shift since his win earlier this year at the RBC Heritage. He relishes a return to being a player simply trying to win a prestigious golf tournament, rather than a man looking to end a winless drought that had reached nearly five years.

“I’m not sitting here answering questions about winning now, where had I not won at Hilton Head, we’d be talking about how many leads I took into Sunday and didn’t work out, and how long it’s been since I’ve won, and why haven’t I?” he said. “It’s a refreshing conversation.”

But he still bears the battle wounds of past disappointment, and with the PGA Championship returning to Whistling Straits next week, he recently read a story about Dustin Johnson’s lingering “scars” from five years ago and empathized with the article’s subject.

“Everyone’s got them out here. That’s the first thing that went through my mind,” he said. “It’s happened to all of us. It’s how you handle those situations that end up making or breaking you and your career.”

Furyk took a big stride toward healing some of those scars with his win at Hilton Head, and now he appears determined to close the deal at Firestone, where he has yet to top the leaderboard after a number of close calls.

The player and the course have always gotten along, but they could soon also share a trophy shot.