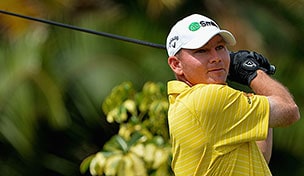 Getty Images
“I know what it feels like to be Jordan Spieth now, I guess, shooting 10 under every round." - on his third-round 63 Saturday at Kapalua  -

Fans have applauded your final putt. Fellow pros have offered congratulations. Trophy engravers have confirmed the spelling of your name, and your playing schedule just got an immediate makeover.

You’ve won a tournament on the PGA Tour. Take a minute to soak it all in.

Once the dust settles, though, a thought may creep into your mind.

For Tommy Gainey and Derek Ernst, who both carded rounds of 4-under 66 Thursday at the Honda Classic, following up a breakthrough victory has proven difficult.

At the conclusion of the 2012 season, Gainey elevated his status beyond that of a “Big Break” alumnus, or a player known for wearing two gloves. He captured the McGladrey Classic that November, and did so in impressive fashion – firing a final-round 60 to erase a seven-shot deficit.

The victory earned him a trip to Kapalua two months later for the 2013 Hyundai Tournament of Champions, where he promptly tied for sixth. That result, though, still serves as the only top-10 finish for Gainey in 39 starts since his triumph at Sea Island.

The 38-year-old journeyman is the first to admit that much of his struggles emanated from within.

“I put more pressure on myself after McGladrey,” Gainey said. “That final round, when I shot what I shot ... you feel like you can win any tournament.”

Imbued with confidence, Gainey believed that his maiden title would serve as a stepping stone toward the next stage in his career.

Instead, Gainey has spent much of the past 15 months simply trying to make the weekend. He missed the cut in half of his 28 starts last season, and his slump continues. Gainey has made the cut only twice in 10 starts during the 2013-14 season, including early exits at five straight events during the West Coast swing.

“When you put too much pressure on yourself, things like that can happen.”

A return to the Sunshine State couldn’t have come sooner. A native of South Carolina, Gainey grew up playing on Bermuda grass, which could be a reason why he struggled with poa annua greens in California. This week, he says, the pressure is off as he looks to return to the form that earned him his breakthrough win.

Ernst was only months removed from earning his PGA Tour card at Q-School when he burst onto the scene last May, capturing the Wells Fargo Championship in a rainy playoff over David Lynn at Quail Hollow.

The win netted the 23-year-old a spot in The Players Championship the following week, where Ernst admits his perception among his peers received a quick overhaul.

“That’s where it was like, ‘Bam.’ People actually know who I am,” said Ernst, who made four birdies and an eagle Thursday at PGA National.

Ernst struggled in the wake of his triumph, though. In 23 subsequent starts, he has missed the cut 15 times, and his lone top-40 finish comes with an asterisk – Ernst finished 30th among a 30-man field last month during the winners-only event at Kapalua.

Like Gainey, he expected things to be easier following his victory.

“I felt like, hey, I won, so I should be able to do it every time now. Or at least every once in a while,” he said.

Ernst began to practice even harder last summer, regularly logging sessions that lasted 10 hours, sometimes longer. Those efforts failed to end his slump, though, and he made sweeping changes this past offseason.

“I changed agent, changed caddie, changed swing coach and I got a trainer,” he said. “Other than that, it’s pretty much the same.”

Unable to translate his efforts into better finishes, Ernst has worked in recent weeks to focus less on the leaderboard.

“I have a goal every week of what I want to do, and it’s not a results goal, it’s just a process goal. If I do that, then I’m fine. I don’t care about what the result is. If I did what I can do, then that’s all that I can control.”

Winning remains the goal for every player in the field this week, and Ernst and Gainey can take heart in knowing they have already reached a pinnacle to which many can only aspire.

As each can attest, though, the second chapter in a career is sometimes the most difficult to write.