Garcia (73) still center of attention after ace at 17 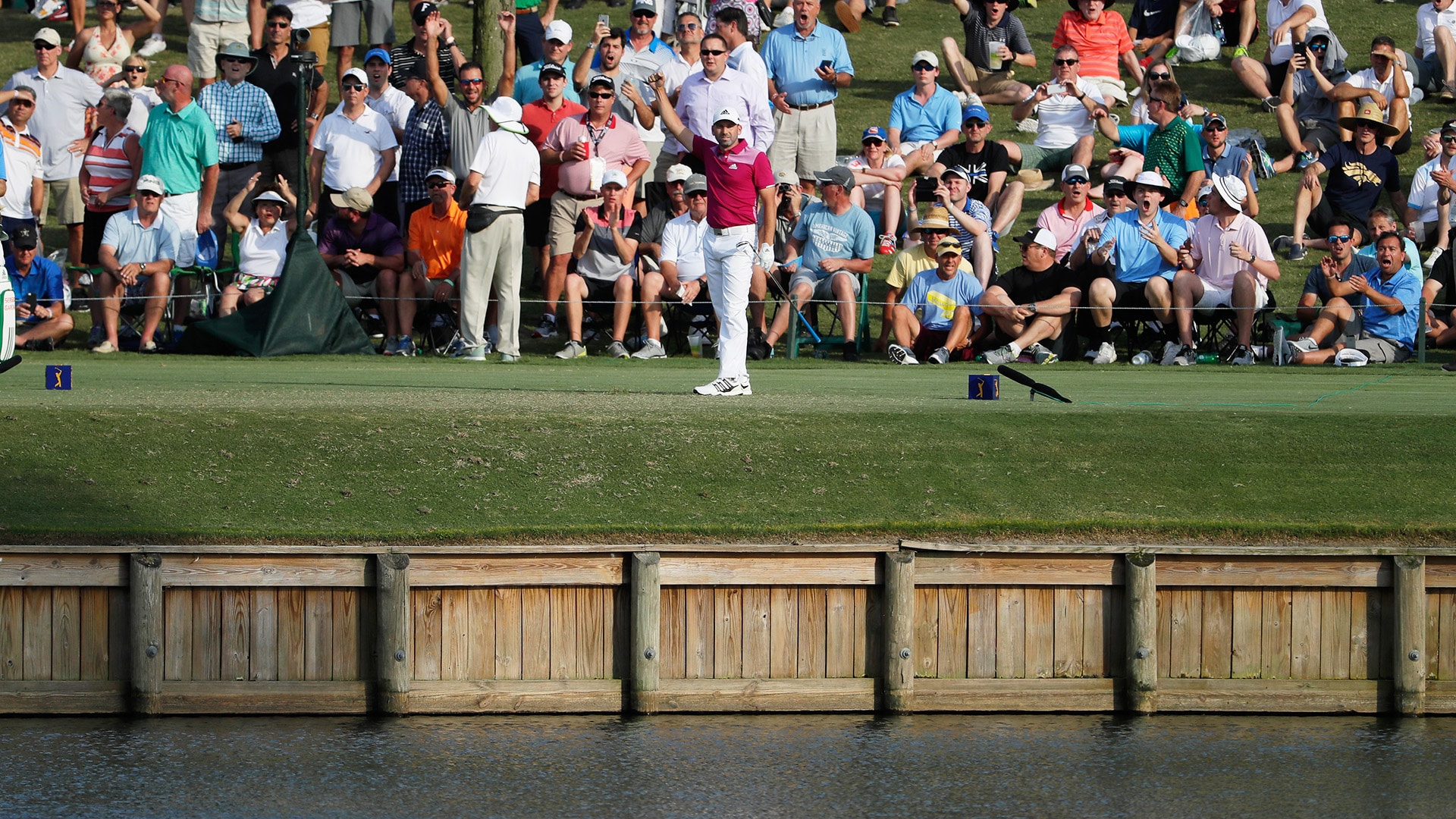 PONTE VEDRA BEACH, Fla. – As he addressed the media next to the yawning clubhouse at TPC Sawgrass, the chant from the autograph area grew louder by the minute.

Garcia answered each question, but the chants grew louder still. Finally, they reached a crescendo that elicited a wry grin from the Spaniard.

“I guess I’d better head over there,” he said.

This was always the dream scenario for Sergio Garcia. The 1:41 p.m. tee time in the opening round of The Players Championship was effectively a celebration in his honor, the first of many opportunities for Garcia to be introduced on the first tee of a tournament as Masters champ.

The green jacket wasn’t on his shoulders as he struck his opening tee shot, but it might as well have been. And while the honeymoon period quickly dried up once he hit the course, Garcia managed to author a highlight by day’s end that will be difficult to top the rest of the week.

Garcia has been one of the few players to consistently tame Pete Dye’s menacing design, and he entered this week with 13 straight made cuts at the PGA Tour’s flagship event. But after six holes that streak appeared in dire jeopardy, as Garcia stood at 4 over after an opening bogey and a four-putt double on No. 5.

“I was a little bit nervous early on. I think I wasn’t quite in the tournament because of everything that’s been going on, obviously after the Masters win, and media, and people congratulating you left, right and center,” Garcia said. “I felt like I was a little bit up in the clouds, and when I woke up, I was 4 over after six.”

He managed to get things somewhat back on track, but as he made the nerve-wracking walk from the 16th green to the 17th tee he still stood at 3 over.

Garcia’s relationship with the island green certainly qualifies as complicated. It was there that he defeated Paul Goydos in a playoff to win the 2008 Players, and it was also where he lost the tournament in both 2013 (two balls in the water during the final round while leading) and 2015 (part of a playoff loss to Rickie Fowler).

But Thursday he used his 52-degree wedge to author another positive memory on one of the most iconic holes in golf.

“It was nice to see it bounce and spin back into the hole,” Garcia said. “Maybe I needed it after the start I had. It kind of made a poor round into, not a great round, but a decent round.”

Garcia’s ace was the eighth in tournament history on No. 17, the second in as many years and a shot that sent the fans gathered in the adjacent amphitheater into a frenzy.

“It was a great shot the whole way,” said playing partner Matt Kuchar. “You’re kind of hoping for it, and then it was awfully exciting when it went in. I mean, 17 has got to be the most recognizable hole in the world. To have one there is very cool.”

Garcia watched a replay of his shot on a giant video screen next to the tee, and he basked in the applause that deservedly went his way. It was a remarkable situation considering this was the same setting where a very pro-Tiger Woods gallery had reveled in Garcia’s demise on the penultimate hole just four years ago.

But the sport’s landscape has undergone a seismic shift in the interim, and now Garcia is the man of the hour.

“It was awesome,” Kuchar said. “Just the first tee experience was very cool, Sergio being announced as Masters champ. The crowd was very warm and welcoming, excited to have him. It was a lot of love there from fans for Sergio.”

Garcia did his best to downplay the situation, noting the quirkiness of the 17th hole that caused Adam Scott to follow his ace, land his ball a few feet to the right and watch as it spun back into the water.

“Obviously, it was a hole-in-one,” Garcia said. “So if they don’t react to that, then something’s wrong.”

The day began with Garcia squarely in the spotlight, and hours later he managed to thrust himself back into it with a single, 123-yard wedge.

It’s not often that a 1-over 73 makes you the center of attention. But these days it’s good to be Sergio Garcia, and Thursday was no exception.