Greenbrier headed for a free-for-all finish

WHITE SULPHUR SPRINGS, W. Va. – Even after the final sparkler fizzles out on the lawns near the Old White TPC, there will be plenty of fireworks still to come at The Greenbrier Classic.

A Sunday shootout looms, with a packed leaderboard set to battle it out on a course synonymous with low scores and final-round theatrics.

Eight players are separated by a single shot through 54 holes, with another 23 names within four shots of the lead. Each will wake up with realistic thoughts of hoisting the trophy, from rookies seeking a breakthrough to veterans looking for validation.

Granted, the winner will not have to slay a murderer’s row of recent champions. Of the top eight players, only three have won on the PGA Tour. The most recent of those victories was Bryce Molder’s win at the 2011 Frys.com Open.

Sean O’Hair had a victory that year too, the latest of his four career wins. He holds a tenuous grip on a share of the lead, alongside Molder, Jason Bohn and S. J. Park, with one round separating him from a victory that would complete his return to the top levels of the game.

O’Hair had just turned 29 when he captured the RBC Canadian Open, seemingly set to enter a golfer’s prime with equal parts accomplishment and potential. Instead he watched his game desert him, bottoming out with a two-year stretch in 2013-14 that cost him his card.

Equipped once again with full-time status, the 32-year-old has flourished this season, with six top-25 finishes including a playoff loss to Jordan Spieth at the Valspar Championship.

“I feel like I’ve got my best golf ahead of me. I really do,” O’Hair said. “I just felt like the last couple years when I’ve struggled, I haven’t really owned my game. I’ve tried a lot of different things, a lot of different methods, and really just got back to me hitting a lot of balls and just going back to basics and kind of, like I said, just owning it.”

O’Hair’s four victories are one more than the combined total of his seven closest competitors, but he plans to draw inspiration from an unexpected source.

At age 42, Bohn is one of the few players near the top with more seasoning than O’Hair. He likely didn’t expect to add to his dossier of high finishes after barely scraping past the 36-hole cut. But then again, a third-round 61 can change expectations considerably.

“I just wanted to sleep in, to be honest,” said Bohn, who will play alongside O’Hair in Sunday’s final pairing. “Now I don’t have to get up early in the morning.”

Bohn has two wins, most recently the 2010 Zurich Classic, while the final member of the foursome at the top is an unheralded rookie. But Park’s record of one top-25 finish in 20 starts this season doesn’t dampen his confidence entering what could be the biggest round of his career.

“I think I’m going to really have fun tomorrow,” said Park, who was a runner-up at the Humana Challenge in January. “I’ve had this situation before, been in this position, so it’s always going to be the same. It’s going to be another round for me.”

The Greenbrier has rewarded rookies in the past, notably Scott Stallings in 2011 and Ted Potter Jr. the following year, and Park isn’t the only freshman in the mix. Justin Thomas headlines the group of players at 10 under, just one shot off the pace, eyeing a title that would cement his status as one of golf’s latest can’t-miss prospects.

“I’ve been ready to win since I was playing as an amateur,” Thomas said. “I’ve just put myself in more positions now. Just whenever it’s meant to be, it’ll happen.”

Within these West Virginia mountains, it’s often better to come from behind than to try to protect an advantage. Stuart Appleby set that tone with a final-round 59 en route to victory in 2010, with similar late heroics from Stallings, Jonas Blixt and (nearly) George McNeill in the years since.

There will be plenty of final-round roars, and perhaps even more fluctuations to the leaderboard.

“I just feel like this field every week is just so strong, and it’s really anybody’s game any given Sunday,” said O’Hair. “It’s exciting.”

“It’s becoming more and more common out here, I think,” added Molder. “If nobody decides to run off and leave everyone, then you kind of get that bunched-up feeling.”

It should prove difficult to separate from the pack during the final trip around the Old White TPC, where nearly half the field remains in the mix. The only certainty seems to be that someone will emerge with enough final-round fireworks to earn what could be a watershed victory. 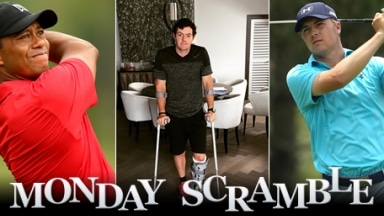 Tiger Woods isn't back, but he's improved. So, too, are Jordan Spieth's Grand Slam chances after news of Rory McIlroy's injury. 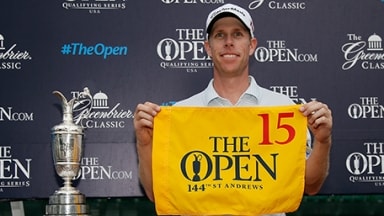 David Hearn was denied his maiden victory at The Greenbrier Classic, but he did leave with a consolation prize in the form of a trip to the Open Championship. Bohn part of four-way tie through 54 at Greenbrier

Here’s how things look after three days on the Old White TPC, where four players share the lead.