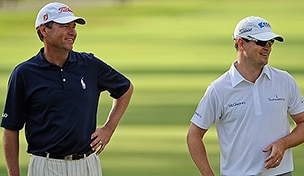 Getty Images
"Unfortunately, I had to stay longer watching the game than I wanted to." &ndash; on staying up late in Turkey to watch his alma mater Stanford beat Oregon in football (Getty)  -

SEA ISLAND, Ga. – Over the past two weeks, PGA Tour players haven’t had much familiarity or routine.

Hours of layovers in airport terminals, jet lag from cross-continental time changes, foreign hotel beds in foreign countries with, you guessed it, foreign languages have all been the name of the game.

While the PGA Tour’s decision to include the CIMB Classic in Malaysia and last week’s WGC-HSBC Champions in China as official events on the 2013-14 schedule may have helped increase golf's global footprint, it also took many players out of their proverbial comfort zone.

For several participants this week, The McGladrey Classic offers the exact opposite: a well-received dose of home cooking.

While a large percentage of players call Florida home – for reasons ranging from weather to taxes – a growing number of Tour players boast ties to Sea Island, a sleepy golf sanctuary off the coast of Southeast Georgia. When this week’s event comes around each year, it brings the added benefits of friendly confines.

“I’m extremely excited about it. I’m sleeping in my own bed, playing a course that I’m very familiar with,” said Zach Johnson, who estimated a walk from the Seaside Course to his home in nearby St. Simons Island would last 15 minutes. “I just love being at home, and when I can work at home, that’s a nice treat.”

Johnson, ranked No. 13 in the world rankings, is the second highest-ranked player in this week’s field. That distinction still leaves him looking up at another local resident, as No. 8 Matt Kuchar, is also set to tee it up Thursday.

The list of upper-echelon players that have settled in and around the area is impressive, with many opting to play this week in what is as close to a home game as they will find.

“There’s 12 guys that live here that are on Tour, and then there’s 15 more guys that are associated with this island in some degree,” Johnson added. “That’s a fifth of the field that has a connection here.”

While the ranks of PGA Tour winners and major champions comprising the “Sea Island Mafia” continue to grow, the player to whom the transplants attribute their various transitions is clear.

Davis Love III moved to Sea Island more than 30 years ago, and over the years has become the de facto spokesperson for golf in the area. This week, he again shares dual roles as both event participant and tournament host.

“It’s a nice group. You know, they tend to call me Uncle Davis when they need something,” joked Love, referencing the younger crop of Sea Island players that includes the likes of PGA Tour winner Harris English. “We’ve got great guys around to play golf with, to challenge, to push you.”

Like many this week, Love is looking forward to playing on a familiar venue where he nearly won a year ago. At age 48, and months removed from his Ryder Cup captaincy, the former PGA champion played his way into the final group on Sunday, ultimately tying for fourth behind Tommy Gainey after a final-round 71.

In reflecting on his near-miss, Love admitted that the home-field factor of this event can be a mixed blessing.

“You’re comfortable with the golf course, but you’ve also got the pressures of playing at home and expectations,” he said. “You try a little too hard, and I know Jim Furyk and I certainly, the last group last year were trying too hard to win because it would have been neat for either one of us to win this event.”

Those sentiments were echoed by Johnson, whose tie for 12th in 2010 remains his best result in three McGladrey appearances.

“Some people would say pressure, but I would just say there’s just added weight,” explained Johnson, who tied for 49th here a year ago. “I want to perform well here because it’s where I live.”

Johnson, an Iowa native, also circles the John Deere Classic as an annual must-play event. While the former Masters champion isn’t ready to “equate” this week’s event with the Deere, which he won in 2012, he does see certain parallels between both the tournaments and the surroundings.

“You know, it’s everything I grew up accustomed to in Iowa,” Johnson said of Sea Island, “except for we’ve got an ocean instead of a cornfield.”

While a Sea Island resident has yet to hoist the trophy on the Seaside Course, sheer numbers seem to indicate that trend will come to an end sooner rather than later. In the interim, several players will be able to recharge their batteries this week at a familiar venue, all while Love continues his campaign to coax many of the world’s best players to his secluded strip of paradise.

“They see the practice facilities, they see how nice it is. They might come over to my house for a barbecue and then kind of say, ‘Hey, I could live here, too,’” he added. “So we’re sucking them in.”

One thing remains certain: after two weeks of PGA Tour events staged halfway around the world, many players are eager to feel at home.