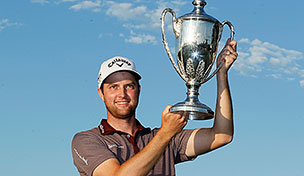 Getty Images
Melissa Reid of England plays her third shot on the par 5, 10th hole during the first round of the 2013 Omega Dubai Ladies Masters on the Majilis Course at the Emirates Golf Club on December 4, 2013 in Dubai, United Arab Emirates. (Photo by David Cannon/Getty Images)  -

Six weeks after moving from the coastal community to the Atlanta suburbs, Kirk survived a tumultuous back nine Sunday to capture his second career PGA Tour victory at the McGladrey Classic.

“Obviously the biggest win of my career,” said Kirk, who finished a shot clear of Briny Baird and Tim Clark after a 4-under 66. “To come here to Sea Island, which is a place that I love and cherish so much ... it’s just an unbelievable thing.”

Beginning the final round tied for the lead with Baird, Kirk opened with seven consecutive pars before a birdie at the par-5 seventh hole. That would spark a run of four birdies across six holes, equipping the former Georgia standout with a two-shot advantage as he stood on the 14th tee.

From there, things got interesting.

Kirk’s lead was cut in half when Baird birdied No. 13, and erased entirely after Kirk found a hazard left of the 14th fairway with his tee shot. Another birdie from Baird turned what was once a two-shot lead into a one-shot deficit in the span of two holes.

“It was a bizarre, bizarre day for me,” said Kirk, 28. “I was hitting a lot of really good, quality shots, hitting it right where I was looking, and then all of a sudden kind of had a little bit of a bad tee shot at 14.”

Both players left the par-5 15th with the same score, but with momentum shifting back to Kirk.

After Baird reached the green in two, leaving himself 42 feet for eagle, Kirk's hybrid approach from 243 yards found the greenside hazard.

“Kind of got in between clubs a little bit,” he said.  “Trying to take a little off of it in that situation is always a little bit dicey.”

Staring at a potential three-shot deficit with three holes to go, Kirk instead rallied for par, getting up and down from 45 yards in front of the green. Baird then three-putted for par, leaving Kirk a shot off the pace.

“I honestly thought that ball was just going to keep turning and just slam the back of the hole and go in,” Baird said of his eagle attempt. “I didn’t hit a real good putt coming back.”

Kirk drew even with a birdie on the par-3 17th. With the potential of a playoff looming, the tournament was instead decided in a fairway bunker on the 18th.

Both Kirk and Baird hit wayward tee shots on the home hole, though Baird drew a difficult lie in the sand, while Kirk’s ball landed safely in the left rough.

“I didn’t feel good with my swing, wasn’t comfortable,” said Baird, 41. “You mix that with nerves, and it’s a recipe for disaster.”

With Kirk likely to make par, Baird attempted to reach the green with a 4-iron from more than 200 yards despite an awkwardt stance. The ball traveled only 91 yards, though, tumbling into the water left of the green to essentially seal the tournament for Kirk.

“I didn’t have obviously a really good lie, but it was a doable shot. My foot just slipped,” said Baird, who got up and down from 130 yards to salvage bogey and a share of second place. “It’s disappointing. I fought really, really hard. I really did.”

Now a six-time runner-up on the PGA Tour, Baird remains in search of his first victory after 365 career starts.

“It’s amazing what the difference could have been if I’d have just made a bogey earlier in the day,” Baird said. “If I miss (a birdie) putt and make par on 18 and lose by a shot, it sure would sting less.”

In the end, it was Kirk who emerged victorious on a course he estimates he has played nearly 300 times – though prior to this week, he hadn’t had much success.

“I don’t exactly have an incredible track record on this golf course,” said Kirk, who had cracked the top 60 just once in three prior McGladrey starts.

The key to his turnaround this week was accuracy off the tee.

“This is a golf course that you really need to play from the fairway,” Kirk said. “Thankfully I drove the ball well this week and the rest of my game was really good.”

A winner in 2011 as a rookie at the Sanderson Farms Championship, Kirk now has two PGA Tour victories. Unlike his win in Mississippi, though, Sunday’s triumph comes with a spot in the Masters next spring.

Having never played in the season’s first major, Kirk admitted to thinking about Augusta National well before the final putt was holed.

“Obviously, winning the Masters would be the greatest thing that I could ever do in my golfing career,” said Kirk, who played Augusta National once a year while at the University of Georgia from 2003-2007. “You can’t win if you’re not playing.”

Though he’s now relocated with his family to the Atlanta area in anticipation of the birth of his second child, Kirk maintains a house near Sea Island and, having lived here for several years, has built a relationship with tournament host Davis Love III.

“Davis was kind of the guy when I was 12 and 13, really starting to play golf. He was my favorite player that I always looked up to,” Kirk said. “He’s turned from being my idol to sort of a mentor and a good friend.”

Following the win, Kirk reminisced about the first time he met Love during a tournament following his sophomore year of high school.

“My parents have a picture of Davis and I on their little mantel from that tournament,” he added. “I had braces and kind of long sideburns. It’s a pretty funny picture now.”

With the McGladrey trophy now under his arm and his 2014 schedule set to include a stop in Augusta, Kirk speculated that his parents may adjust their mantel to make room for a picture with Love following Sunday’s win.

“I would guess so, yeah,” said Kirk. “Right next to the other one.”