Phil has made strides, but lipped putt will sting 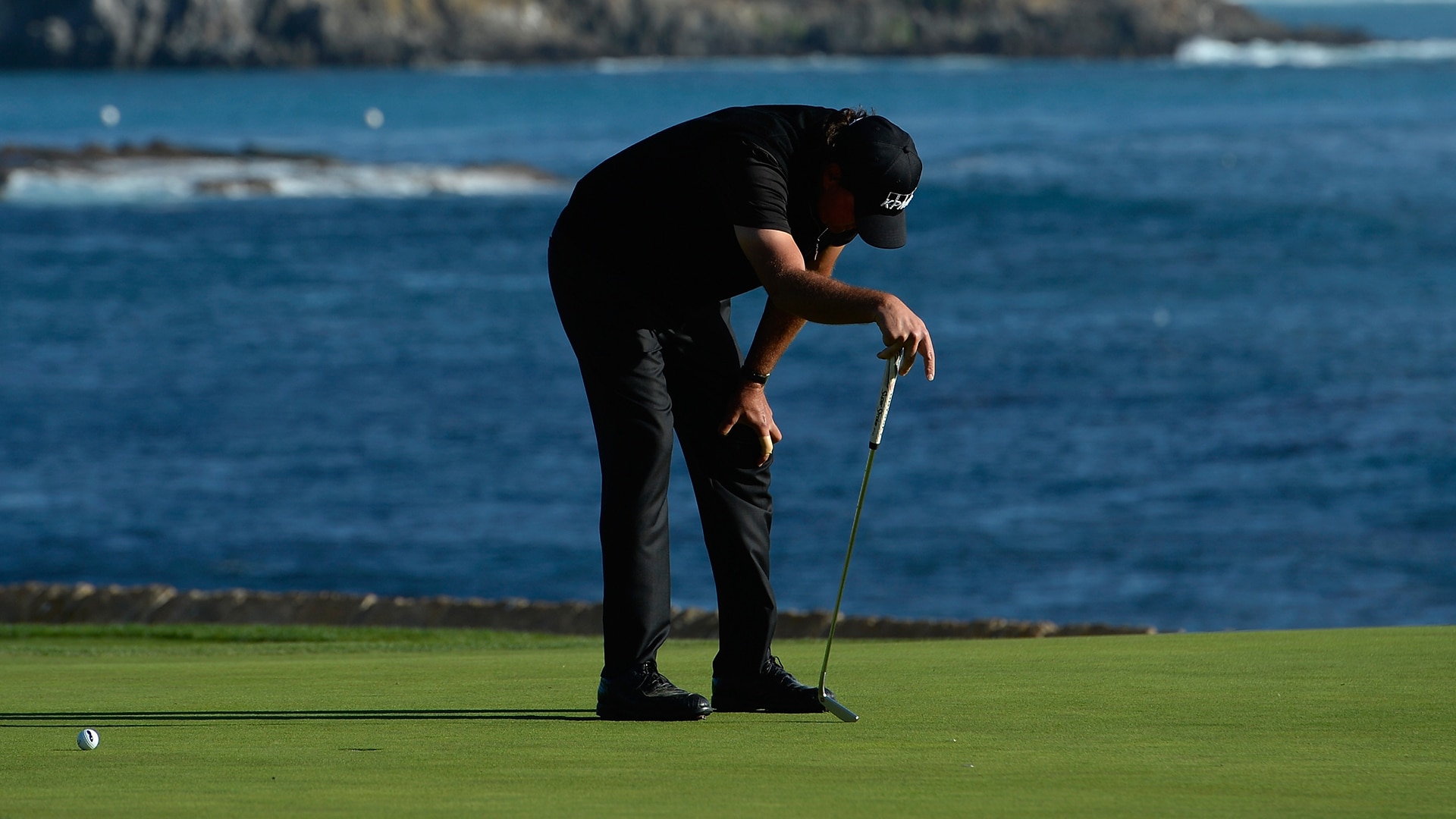 PEBBLE BEACH, Calif. – Fifteen minutes after watching his title hopes carom off the left edge of the final hole he faced at Pebble Beach, Phil Mickelson could only smile and shake his head.

This was where the drought was supposed to end. Hallowed ground, familiar territory, a place he knew and loved against a leaderboard that didn’t seem to pack much of a punch. In the end, it turned into just the latest piece of scar tissue lining the psyche of a five-time major champ.

Mickelson began the day two shots clear at the AT&T Pebble Beach Pro-Am, seemingly set for a coronation that would lead to his fifth tournament title and first win in nearly three years. Instead, he faltered almost right out of the gates and watched helplessly as Vaughn Taylor caught and passed him.

A birdie on the penultimate hole set the stage for a dramatic Mickelson rally, but that scene ended with him in a state of shock after his final birdie putt – one that would have forced a playoff with Taylor – caught the edge and turned away.

The longest victory drought of his professional career, dating all the way back to the 2013 Open Championship, will extend at least a little while longer.

“Disappointing not to have finished it off today,” Mickelson said. “It’s disappointing not to play a little bit more mistake-free on a final round with the lead. There were a lot of opportunities, easy up-and-downs that I didn’t capitalize on to keep the round going. I let a lot of shots slide there.”

Mickelson opened with a trio of unsteady pars and began to leak oil with bogeys on Nos. 4 and 5. While he regained the lead by the time he made the turn, Mickelson wasn’t under par at any point of his final round and seemed to spend the entire day in chase mode despite his starting position.

“I played a bit tighter throughout the round than I wanted to,” he said. “I was trying to kind of free it up, but I didn’t salvage pars on some holes that I needed to salvage pars.”

Equipped with hindsight, there were certainly a few clues that a clunker was within reach for Mickelson despite three straight rounds this week of 68 or better. He continued to tinker with his equipment throughout the tournament, and even after a third-round 66 he opted for a swing session with new coach Andrew Getson.

While Mickelson professed that his overnight consult with Getson was productive, the end result was an even-par 72, six shots higher than the day prior, and ultimately one shot too many.

“We came out, had a nice session in the morning,” he said. “I made some good swings. A good drive on (No.) 2, which told me that I was on the right track. I thought I hit it OK today.”

But the cozy confines of Pebble Beach can accentuate even the smallest flaws. After successfully scraping it around Spyglass Hill and Monterey Peninsula, Mickelson found only 18 of 36 greens in regulation over the weekend at the host course, including nine of 18 on Sunday.

Even for a player blessed with perhaps the best short game of all time, it was simply too much scrambling to manage.

Given a few moments to reflect, Mickelson opted to highlight the positives from this four-week stretch to open a new season. He has finished T-11 or better three times in that span, including a pair of top-three results.

Another close call only whetted his appetite and heightened his sense of determination, a term that he continued to circle back to during post-round comments. After a week off, he said, he’ll head with vigor to Honda, and Doral after that.

But make no mistake, this one hurt. Mickelson carried a 54-hole lead into a tournament for the first time since the 2013 U.S. Open, and while this particular dose of heartbreak isn’t quite on the same scale as Merion, Mickelson’s comments belied a man already racked with regret.

Taylor will be characterized as a deserving champion with a rich backstory of his own, but this round – this tournament – has been about Mickelson. It has been the culmination of a month-long stretch, a decorated champion showing fans and peers alike that he still has plenty of gas left in the tank.

But Mickelson’s defining moment from this tournament won’t be any of the birdies he made, or the drives he striped, or the cheers he received. It will be that final putt, the final stroke that drifted just off-line and left him wondering once again what could have possibly gone wrong.

The momentum he conjured here may help down the line, but it will do little to blunt the sting from the sobering fact that this will go down as yet another trophy that got away.

“It makes me more determined to get back to work and get this thing right, because I know that I’m on the right track,” he said. “I know that I’m close to being where I want to be. But if I was there, I would have been able to finish it off.”