Stenson two back in bid to win Race to Dubai 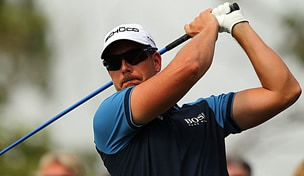 Looking to secure the Race to Dubai title in addition to his FedEx Cup crown, Henrik Stenson got off to a strong start Thursday in Dubai. Here’s how things shape up after one round of the European Tour season-ending DP World Tour Championship, where Stenson sits two shots behind leader Alejandro Canizares:

What it means: Not much was solved Thursday, as many of the nine player still mathematically eligible to win the season-long title remain in the hunt. Stenson, though, can end the race with a win this week in Dubai, and appears in position to do just that through one round. Despite a missed putt from less than 3 feet on the final hole, Stenson's 4-under 68 was the best among players with a chance to win the Race to Dubai title.

Round of the day: Entering the week 54th in the Race to Dubai standings among the 60-man field, Canizares opened with a pair of birdies Thursday en route to an outward 3-under 33. The Spaniard added three consecutive birdies from Nos. 14-16 on his inward half, totaling seven birdies Thursday while setting the pace. Seeking his second career European Tour victory, Canizares takes a one-shot lead into the second round.

Best of the rest: Aphibarnrat got off to a strong start Thursday, playing his first 11 holes in 5 under. The Thai dropped a shot at 12, but bounced back with an eagle at the par-5 14th and, despite a bogey on the closing hole, sits just one shot off the pace. Like Canizares, he's in search of his second career European Tour title, which would serve as the highlight of what has been a noteworthy 2013 campaign for the 24-year-old.

Biggest disappointment: Beginning the week third in the overall standings, Graeme McDowell stumbled out of the gates, with bogeys on two of his first three holes. The Ulsterman was 3 over on his round through 13 holes, though he rallied somewhat with birdies on holes 14-16. Nevertheless, McDowell sits six shots off the pace through one round, having carded an even-par 72 on a day when low scores were abundant.

Main storyline heading into Friday: Though Canizares leads the tournament, much of the focus will be on Stenson as he looks to close in on the Race to Dubai title. Several players remain within striking distance of Stenson, though, including Justin Rose, who sits second in points and opened with a 2-under 70, and Ian Poulter, who is fourth in the standings and began with a 3-under 69. Even Welshman Donaldson kept his hopes alive Thursday, firing a 4-under 68 to keep pace with Stenson as he looks to move from fifth to first in the season-long race this week.

Quote of the day: "Frustrating to drop one there, but still good for the first round. I'm playing good, so not too worried about the game out there. Still three days to go." - Stenson, after closing with a three-putt bogey on the 18th hole.