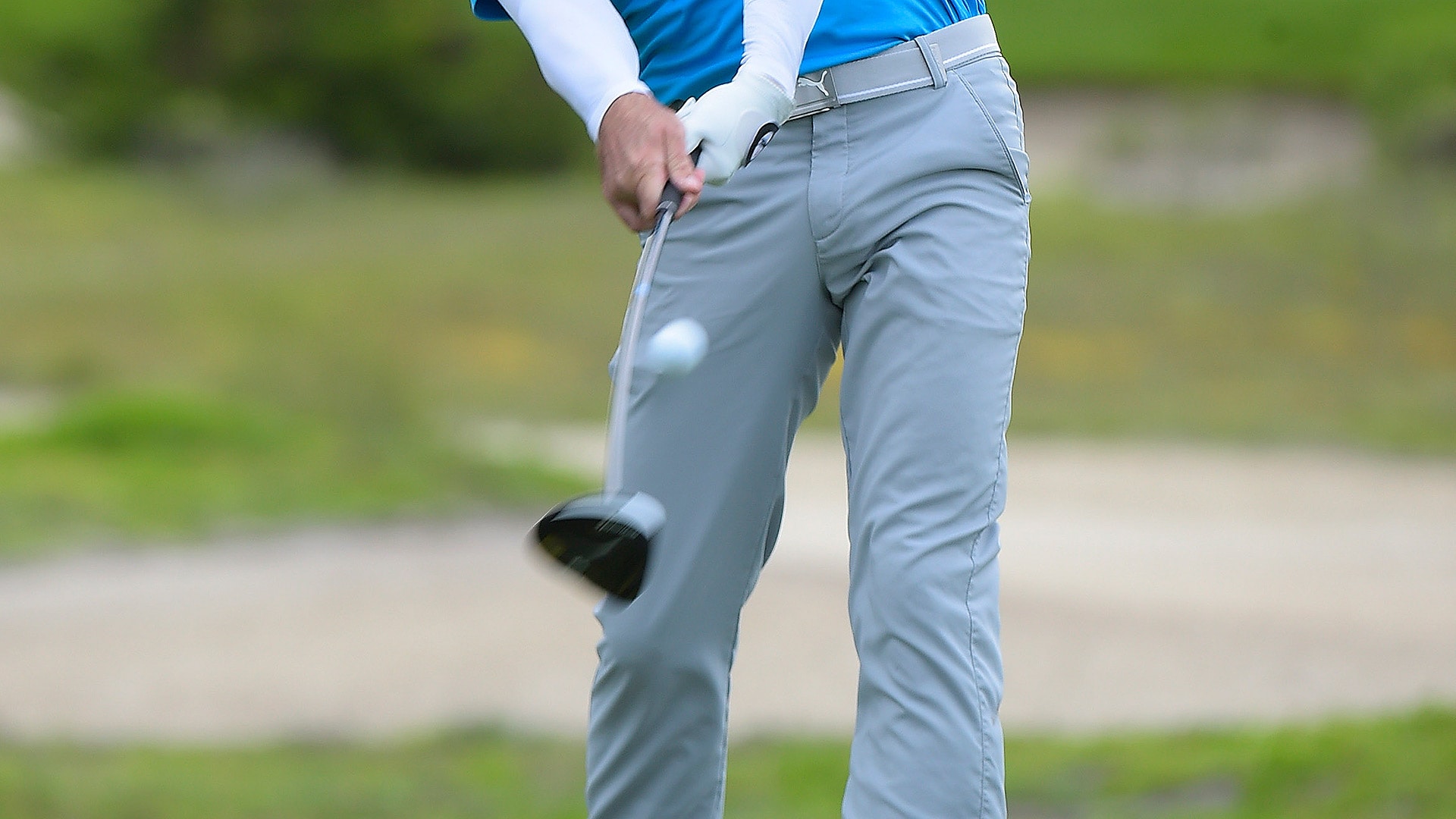 PALM HARBOR, Fla. – Give Mike Davis some credit for thinking outside the box.

As executive director and CEO of the USGA, Davis often becomes the organization’s de facto spokesperson when defending its actions or addressing a variety of controversies. But this week at the North American Golf Innovation Symposium, Davis used his platform to float a novel concept that may someday save a number of classic courses that have otherwise been left in the dust.

Davis offered up the notion of a “variable distance” golf ball, an optional tool by which bombers like Dustin Johnson might use a ball built to 80 percent capacity. According to Davis’ reasoning, it would curb the current rush to perpetually lengthen modern courses and would bring some old-school designs back into play.

"Throw Dustin an 80 percent golf ball and say, 'Let's go play the back tees,' and guess what? It would be a great experience for him," Davis said. "He'd be able to play this wonderful, historic golf course that, by and large, he can't play anymore."

The optics of Davis’ proposal are a little questionable, considering it comes just weeks after his organization released a report insisting that distance gains among the professional game have been negligible since 2003. But the idea to focus attention not on the ever-evolving club, but instead on the ball, is certainly intriguing.

It’s also one that seems to have a fair amount of support from PGA Tour players, many of whom agree that some sort of adjustment must be made soon.

“The alarm bells start going off when they put the 17th tee at St. Andrews 50 yards back,” Graeme McDowell said Wednesday at the Valspar Championship. “You’ve got one of the most iconic golf holes, maybe in the world, being kind of torn up and having to be re-invented because the guys are hitting it too far.”

McDowell recalled times during his youth when his home course would be full and he would instead play an adjacent par-3 course with a ball originally designed for play in the Cayman Islands.

“It went like 60, 70 percent of the distance, so we could go play this little par-3 course with these Cayman balls,” he said. “It was a lot of fun. It didn’t really replicate the feel of a real ball, but it was an interesting way to play.”

The concept is, at this point, purely hypothetical, and would surely lead to a number of tangled webs with equipment manufacturers. Davis also made clear that it’s not an innovation that he would view as mandatory, but instead might become an additional option at a player’s disposal.

But multiple Tour pros surveyed pointed to innovations in tennis as an interesting parallel, as the International Tennis Federation has taken steps in recent years to throttle back the “power game” and has designed different balls for use on different court speeds.

Charl Schwartzel views Davis’ idea as an added opportunity to help pace of play if new tees built well beyond the course’s original design no longer have to be used.

“Now you have to walk 150 yards back and then walk this way, so you’re walking 300 yards and you’re still at the same place,” Schwartzel said. “If you can make the balls and clubs go shorter, and you can play the old courses, then the game will be 3 ½ hours again. It’s simple. But you’ve got to walk so far, how are you going to play quick? It’s impossible to play quick.”

Support on Tour for a shorter ball option is far from unanimous. Jamie Lovemark is one of the longest hitters in the game, averaging more than 302 yards per tee shot, and he believes an element would be lost if top pros were ever restricted.

“Amateurs like seeing guys hit it 330. They pay to watch people do things they can’t do,” Lovemark said. “It’s fun watching home runs. It’s not fun watching guys hit singles. I think the entertainment value would diminish if you were to scale back the ball.”

When discussion of a scaled-back ball begins, the phrase “Augusta National” is never far behind. The iconic course has continued to push its own topographical limitations in recent years in an effort to keep up with increased player power.

McDowell believes that Augusta National might be the only club that could impose a one-ball rule for an event and still have top players comply.

“I think if the USGA or R&A try to do it, there might be a lot of players kicking and screaming,” he said. “Somehow when it happens at Augusta, there’s a slightly different respect level there. Not sure why, it’s just something special about Augusta.”

Schwartzel has an annual invite to Augusta thanks to his 2011 triumph, and he didn’t bristle at the notion of someday using a special ball specifically for the season’s first major.

“I wouldn’t have an issue with it. I wouldn’t even have an issue if they bring us wooden clubs, as long as everyone plays with it,” Schwartzel said. “Give us all squash balls. We’re going to shoot 120, but at least everyone is going to do the same, so who cares?”

Debate and conjecture will continue to rage on, with a concept like the one Davis suggested likely years from possible implementation.

But it has players thinking, especially as they continue to put distance between themselves and the courses of yesteryear with each towering drive.

“Something’s got to happen,” McDowell said. “We’re starting to lose the integrity of some of the most beautiful courses in the world. They’re becoming outdated, which is just a little scary, really.”