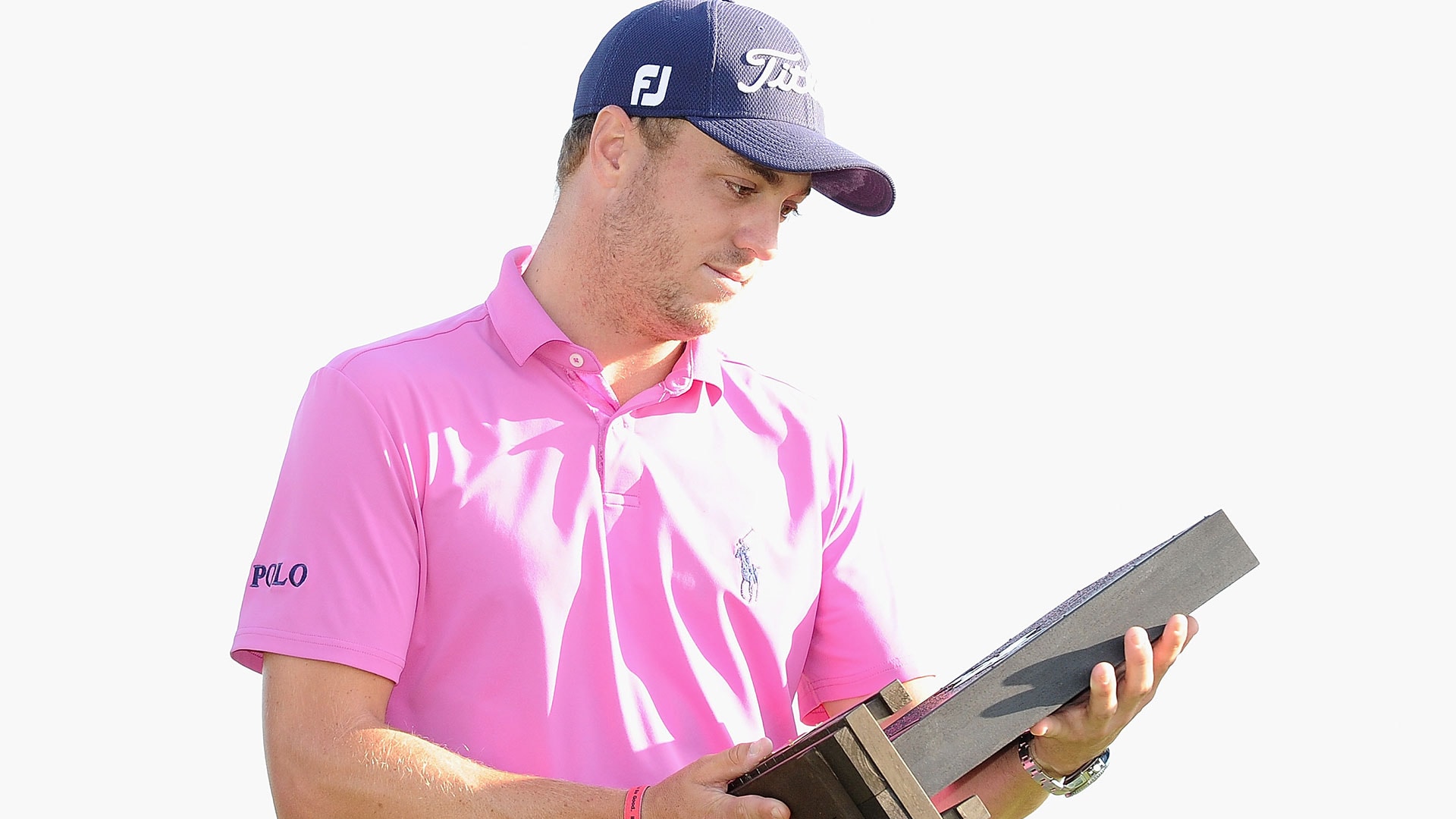 Minutes after holing the winning putt and still standing on the 18th green at Nine Bridges, Justin Thomas took stock of his latest achievement and offered a candid reflection.

"I just know I'm so excited to not do anything," Thomas said. "I officially have nothing left in the tank at the moment."

The mental exhale was certainly warranted after Thomas edged Marc Leishman in a playoff to win the inaugural CJ Cup in South Korea. It also seems only fitting that one of the most lucrative top prizes outside the majors would go to the player who has scooped up nearly every other accolade over the last 12 months.

On Oct. 22, 2016, Thomas was four shots off the lead with one round to go at the CIMB Classic. He was ranked 35th in the world, and had exactly one PGA Tour win under his belt.

Fast forward exactly one year and Thomas is nearly without peer. His victory Sunday was his sixth on Tour in the last 365 days, and it came at an event where he entered as the highest-ranked player in the field. When the new rankings are published, only Dustin Johnson and Jordan Spieth will be ahead of him.

Thomas need only look at the FedExCup and Player of the Year trophies that just arrived on his shelf for visual confirmation of the leap he has taken as a player, but the transformation was once again on full display coming down the stretch on Jeju Island. Unfazed by swirling winds and a world-class opponent, Thomas stared down a gutsy approach - first in regulation and again on the second playoff hole - with the same intensity he showed at Quail Hollow.

"It felt really good to his two really good shots there on 18 in regulation, and I had a putt with a chance to win it," Thomas told reporters. "I hit two great 3-woods there at that second playoff hole. It's a great way to cap off the year."

Thomas' break after the close of last season was measured only in days, as he jetted from the Tour Championship to the Presidents Cup and then to last week's CIMB Classic to defend his title. It's only now, looking at a few weeks off following his final official start of 2017, that he's able to take stock of the progress he has made.

Those strides were nearly too large to count even before this latest victory. But Sunday was another example of Thomas' ability both win against a strong field and do so without his best stuff. This was not the clinical performance from the Sony Open in January, or even the flawless close with which he won the PGA.

But Thomas never wavered, and he barely flinched after a trip to the easy par-5 third hole ended in double bogey.

"It wasn't a mental error or a wrong judgment that we made, it was just a bad golf swing at a pretty bad time," he said. "But I mean, I knew you're going to make bogeys out here today."

It's a testament to the growth he has experienced over the last year that Thomas is now able to effectively shoulder the burden of being the guy with a target on his back. And while he reiterated that he plans to keep his 2018 goals a private matter, it's likely that Thomas will have plenty more opportunities with the tournament resting on his club face in the coming months.

"You give one of the best players in the world a chance like that, he's probably going to take advantage of it," Leishman said shortly after rinsing his final approach.

Thomas will now take a well-deserved respite, the highlight of which might be the honoring of his 2017 accolades during the upcoming football game between LSU and his alma mater, Alabama. And this won't be the last time we see him on a course this year, as he is among the 16 confirmed entrants for the Hero World Challenge in December.

But afforded an opportunity to reflect, both on the week and the steady ascent that has brought him to these heights, Thomas opted to exhale.

"I'm really excited to do nothing for a while," he said.

Thomas was already the most decorated player on Tour this year even before he landed in South Korea. But it seems only fitting that he found a way to close a torrid, 365-day stretch - one that has transformed both his perception and position among the game's elite - with one more win.