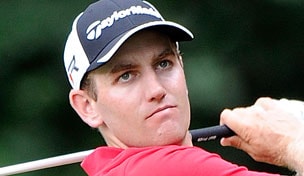 Getty Images
“It’s something that only one person has ever done in Australia. It’s not something that happens very often. I’d have to think it’s a pretty great milestone for an Australian golfer to win all three events down here. … I’ll give it my best and hopefully you can ask me Sunday night and I can tell you where I reckon it ranks. It’s the last week of the year for me. I want to finish big.” – Scott on the possibility of winning the Australian triple crown.  -

ST. SIMONS ISLAND, Ga. – Nine years have passed since Brendon Todd conquered the Sea Island Golf Club to claim medalist honors at the SEC Championship while at the University of Georgia. Now in contention at the McGladrey Classic, the 28-year-old readily admits that he’s relying on that past triumph to fuel this week’s success.

“I’ve thought about it tons,” explained Todd, who sits two shots off the lead after a 3-under 67 Saturday. “I played with Matt Every the last round (in 2004), and I was telling my caddie that I had the same putt yesterday on No. 13 that I made on him there.”

Having captured a title here once before, Todd is confident that a cautious game plan will prove to be the best way to take advantage of the Seaside Course.

“You’ve got to hit the ball well and not get too aggressive,” he noted. “You don’t need to make eight birdies per round. You need to make a few, and just eliminate the bogeys and doubles.”

After splitting his time during the 2013 season between the PGA Tour and Web.com Tour, Todd is off to a strong start in the new wraparound season, with a pair of top-30 finishes in his first two starts last month.

“Consistent ball-striking has been the key this year,” explained Todd, who tied for 12th in his most recent start at the Shriners Hospitals for Children Open. “I’ve gained a lot of confidence from playing both tours, and playing well on both tours, this year, and I just rolled that into the fall.”

With 12 players set to begin the final round within four shots of the lead, the former Georgia standout believes that the Seaside Course will force the contenders to the top of the leaderboard come Sunday afternoon.

“I think the strongest is going to survive on this golf course,” he added. “If you can just plot your way around and shoot a few under, you’ll have a chance.”