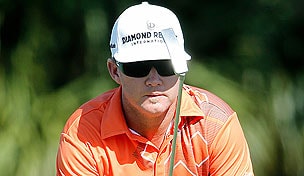 ST. SIMONS ISLAND, Ga. – The commute from Shanghai to Sea Island is a leisurely 7,867 miles. It’s a trip that will take you almost exactly halfway around the world, spanning 11 time zones.

It’s the type of journey that could take several days to shake as biological clocks attempt to re-acclimate to new surroundings.

If you’re a professional golfer, though, it’s no big deal.

Only three players made the cross-continental trip from last week’s WGC-HSBC Champions in China to The McGladrey Classic: Boo Weekley, Scott Piercy and Brian Gay. With strong opening rounds on the Seaside Course, all three found effective ways to deal with jet lag, including Gay, who shares the clubhouse lead after a 7-under 63. George McNeill was 8 under through 16 holes when play was halted because of darkness.

“I wasn’t feeling very good at all this morning,” explained Gay, who carded eight birdies Thursday against just one bogey. “I’ve struggled the last few days sleeping and been really tired.”

After a tie for 46th in Shanghai, Gay left China late Sunday. He didn’t arrive to Sea Island until late Tuesday evening, driving up from Orlando after an earlier flight stop in Chicago.

“I’m really tired all day, but then I’m not sleeping good,” he said. “Should be all right in a day or two, I hope.”

With his body still adjusting to life along the Georgia coastline, Gay received an additional setback Thursday because of an early-morning fog delay that lasted more than 90 minutes.

“I was on the tee when they stopped for the fog,” he said. “I went back to the locker room and kind of rolled the dice a little bit … I just sat in a chair and not really went to sleep, but just relaxed and tried to take a little bit of a nap.”

Once he awoke from his pseudo-slumber, Gay started his round slowly, but caught fire with five birdies across a seven-hole stretch from Nos. 7-13.

“Everything was good,” explained the 41-year-old, who needed just 24 putts. “I made three long putts, which was a bit of a bonus. Did everything pretty well.”

Gay was not the only player battling fatigue, nor was he the only one to do so successfully. Both Weekley and Piercy opened at 3-under 67 to remain within striking distance of the lead.

“Just seemed like I was in a coma out there because I’m so tired,” explained Weekley, who tied for 11th in China. “Just haven’t quite got my bearings on where I want to go or what I want to do.”

Weekley’s trek from Asia was more direct than Gay’s, as the 40-year-old left China Monday and arrived to Sea Island by 5 p.m. ET that same day. He explained that normally he would have skipped this week’s event, but wanted to return to a tournament that gave him a sponsor exemption a year ago.

“After a while, everything started settling in,” Weekley said of a round that closed with birdies on Nos. 7-9. “Once it settled in, we just played.”

Like Weekley, Piercy was able to effectively fight off his body’s sluggish start.

“I was really tired,” explained Piercy, who arrived to Sea Island Tuesday night after a T-21 in Shanghai. “I took like a 30-minute cat nap yesterday and then I couldn’t get to sleep (last night).”

After an arm injury slowed the second half of his 2013 season, Piercy is eager to capitalize on his strong form now that his health is nearing 100 percent.

“Went over to China and felt pretty good, played a couple days and then decided to keep playing because I felt good,” Piercy said. “I’m starting to get a rhythm going a little bit.”

No stranger to keeping odd hours as a native and resident of Las Vegas, Piercy admitted he may look for assistance to rest up before the second round.

“I think there will be some sleeping pills tonight,” he added. “At least I get to sleep in tomorrow, so I figure I’ll be all right.”

While the trio’s globetrotting efforts are already impressive, they’re also far from complete: all three are planning to head to Mexico next week for the OHL Classic at Mayakoba.

“I like that golf course, too, and I’ve won there,” Gay said of his 2008 victory. “I just figure I’m going to grind it out for four weeks and then I’ll have six weeks off before Hawaii.”

Approaching the closest thing to an off-season in golf, Piercy echoed the same sentiments.

“There’s not a whole lot to play the rest of the year,” said Piercy, who unlike Weekley and Gay did not tee it up in the CIMB Classic in Malaysia before his stop in Shanghai.

Their bodies may be out of sync, their expressions fatigued from strange hours and inconsistent sleep. Should their play continue at its current pace this week, though, all three men may be willing to cross a continent (or two) before each subsequent PGA Tour start.