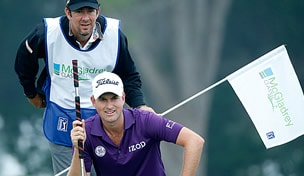 The calendar reads mid-November, but on the PGA Tour, that just means that the first leg of the season is coming to a close.

After five events of its first wraparound schedule, the Tour will conduct this week’s OHL Classic at Mayakoba as the final tournament before a six-week break.

With players afforded the opportunity to see the wraparound schedule in action over the past month, the early reviews are mixed.

“You never really thought it would come to fruition, and now that it’s here, it just kind of feels like it fits,” Zach Johnson said at the McGladrey Classic. “It’s going to take a little bit of time to get used to. I’m not going to deny that.”

After six years of post-playoff golf relegated to the Fall Series, good play in October and November is now being rewarded with increased purses, full FedEx Cup point allotments and trips to the Masters for winners like Jimmy Walker, Ryan Moore and Chris Kirk.

“We’ve changed the culture of the Tour, at least the makeup of it,” Johnson said. “I think the positives are deep, and certainly, if there’s any negatives, they far outweigh them.”

“I don’t know if anyone wants to hear it or not, but I’ve got an opinion. I really don’t like it,” Gainey said. “I’m just going to say one word. Confusing.”

Aside from the labeling issues that can arise from a cross-calendar season, some players question golf’s already-brief offseason growing shorter – if not disappearing entirely.

“It would be nice if there was an offseason,” Scott Piercy said. “We need breaks.”

Piercy made a commute of more than 7,000 miles from the WGC-HSBC Champions in China to last week’s event at Sea Island, where he tied for 63rd. He believes that players feel a certain amount of pressure to tee it up in order to maintain their standing in the season-long points race.

“When you put out $8 million every week … you get passed if you don’t play,” Piercy said. “It’s amazing how you can finish fifth one week and pass four guys, and then sit on the couch the next week and get passed by 15.”

The notion of competing to keep pace is one that drove the 35-year-old to play down the stretch of the 2013 season, despite an elbow injury that caused results to suffer.

“There’s just so many good tournaments, it’s hard to say, ‘I’m not going to play that one,’” he added. “There’s so much riding on every week and every shot; you can’t really afford to sit on your couch, even if it’s at the detriment of your arm.”

Another issue with the inaugural rollout of the wraparound season has been the playing opportunities for Web.com Tour Finals graduates – or lack thereof.

Increased purses and FedEx Cup point allotments have served as effective incentives to boost fields this fall, but that has meant fewer starts for the 50 players who received their 2013-14 PGA Tour cards as part of the four-event Finals in September.

Daniel Chopra, who finished No. 41 out of 50 in the Web.com Tour standings, is making his season debut this week in Mexico – but only after a series of withdrawals allowed him to gain entry as fourth alternate. Others, like Kevin Foley (47th out of 50), have yet to play a single hole this season. The 26-year-old rookie played in a Monday qualifier at the McGladrey Classic, where he failed to earn a spot. He remains on the alternate list for Mayakoba.

The issue of playing opportunities for those near the bottom of the pecking order is one that will be further compounded by next week’s reshuffle, and was a topic addressed by PGA Tour commissioner Tim Finchem during Wednesday news conference.

“Right now we’re focused on watching the fields, seeing what’s happening with the fields, seeing the access that plays out for the qualifiers, the 50 card holders this year,” said Finchem. “Thus far the field strength has gone up a little bit, so it’s been a little tougher than maybe some of us expected for some of the rookies to get in tournaments.”

Those that have made the most of their playing opportunities this fall, though, now find themselves staked to a head start as the calendar flips to 2014. Webb Simpson, a winner last month in Las Vegas, plans to trim his starts on the West Coast in January and February because of the flexibility created by his early-season victory.

Fresh off a runner-up finish at Sea Island, Briny Baird has already satisfied his major medical extension to regain full-time playing privileges for this season. He has also amassed 321 FedEx Cup points – just 48 fewer than Ben Crane needed to grab the final spot in the 2013 FedEx Cup Playoffs. Scott Brown, meanwhile, finds himself 14th in the early FedEx Cup points race after a pair of top-five finishes in his first four starts.

“I think it’s great. I’ve kind of been on both ends,” said Brown, who won the Puerto Rico Open in March. “This way you kind of feel like you’re feeling your way into the season instead of this being the end of it, trying to keep your card or whatever you’re trying to do.”