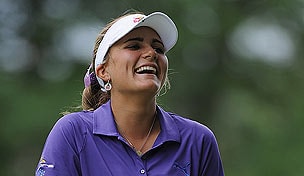 DAYTONA BEACH, Fla. – Lexi Thompson whipped her competition at LPGA International this week during the first stage of LPGA Q-School. Showing no signs of jet lag after firing a 68 Sunday at the soon-to-be major Evian Masters in France, Thompson carded three consecutive rounds of 6-under-par 66 to enter the final round with a seven-shot lead.

Friday, with father Scott on the bag as he’s been all season, she breezed in with a round of 67 which included back-to-back birdies on 13 and 14 at LPGA International’s Champions Course. She finished at 23 under par, 10 shots clear of the next best player in the field. The top 50 and ties advanced to the second stage.

It wasn’t until earlier this month that the 16-year-old received official word from the LPGA that she would be allowed the opportunity to compete for the chance at earning full playing privileges for 2012. It has been LPGA policy that players under the age of 17 (going on 18) cannot be a member of the tour.

Thompson has not only competed, but contended on the LPGA over the past few years. In 2010 at age 15, she tied for 10th at the U.S. Women’s Open and finished runner-up last year at the Evian, which put her 74th in the Rolex world rankings. This year, Thompson shared the 54-hole lead at the Avnet LPGA Classic on May 1 until she collapsed Sunday on the back-nine to finish T-19.

That was one of only three starts she’s made this year on the LPGA. Earlier this season ,Thompson was denied her petition to increase the number of sponsor exemptions she’d be able to accept from six to 12, so she has only three more LPGA starts remaining this season; however, she did not anticipate needing to tee it up in the newly formatted first stage of Q-School.

This year the LPGA required that any player interested in competing for their 2012 LPGA card attend the first stage of Q-School if not a member of any recognized Rolex-ranked women’s golf tour or not inside the top 100 in the Rolex rankings as of July 12.

With a limited number of starts, the world rankings divisor does not work to Thompson’s advantage if she has a couple of less-than-stellar showings, due to the mandatory divisor of 35 over a rolling two-year period. In the most recent rankings released July 25, Thompson was ranked 118th. But it is obvious that if it weren’t for the idiosyncrasies of the system she would be well inside the top 100, probably top 50, and maybe the top 25.

But still, Thompson was required to attend if she wanted the chance granted to her by LPGA commissioner Michael Whan, who waived the age requirement. Thompson’s agent, Bobby Kreusler, said they avoided the potential pressure of the week by not coming in early to play a practice round, allowing Lexi time to rest for a day before jumping back into competition.

But it really wasn’t much of a competition.

She still has two more stages of Q-School to navigate before earning full playing privileges, but if she makes it through, Thompson said she will play a full LPGA schedule in 2012.

“The number of overall events she’d play in a season would not really change, maybe 18 total events, she’d just be playing the majority of her events on the LPGA,” Kreusler added.

She would continue her studies as well, which Kreusler said are ahead of schedule. Thompson is home-schooled through the Florida State Home Education requirements, which today is interactive through web-based curriculum and involves speaking on a daily basis with state-certified teachers.

On the subject of school and schooling, Thompson has been working with her coach, Jim McLean, on extensive swing changes over the last few months. It’s a process that she’s been fighting through. Kreusler said even during the Avnet LPGA Classic she was not swinging her best. She would switch mid-round back to her old swing after she’d hit a bad shot with her new swing, but was still able to scratch out competitive scores.

Thompson easily swung to medalist honors at LPGA International, and said after her round she would celebrate by going home and getting some rest.

This is her summer break after all.