Solheim Cup returns to Scotland, where controversy and the Euros reign 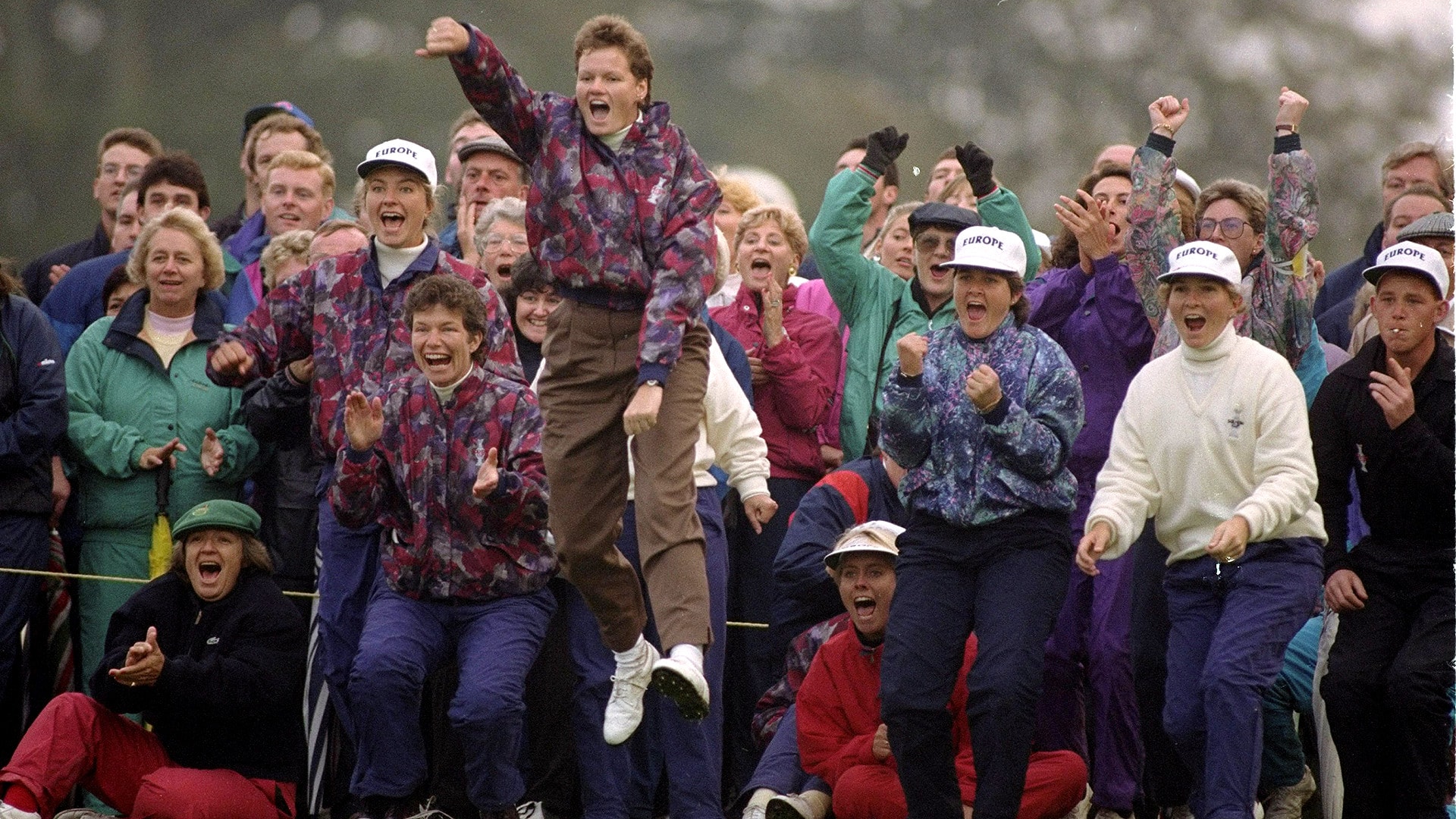 Scotland is like kryptonite for even the most star-studded U.S. Solheim Cup teams.

There’s something about the birthplace of golf that weakens American defenses in the event.

The United States has dominated the biennial international team competition since it began in 1990, compiling a 10-5 record, but the Americans are 0-2 on Scottish soil, where they are headed to meet the Europeans again, at Gleneagles next week.

The cold, damp Scottish weather appeared to help the home team in both those victories, and so did controversies that made European blood boil.

The Solheim Cup might have been launched in Florida, but Scotland put it on the map.

U.S. captain Kathy Whitworth put together a “Who’s Who” of American women in golf for the inaugural staging of the matches at Lake Nona in Orlando. Her wonder women routed Europe, 11½ to 4½. Nobody paying attention was surprised, but, really, hardly anyone paid attention. The LPGA could barely give away tickets to the new event, and no TV entity stepped up to broadcast it.

The Euros thanked American Beth Daniel for that, for igniting interest with an inflammatory comment credited to her.

“You could put any one of us on the European side and make it better,” Daniel was quoted saying in a Golf Digest story advancing the competition. “But the only Europeans who could help us are Laura Davies and Liselotte Neumann.”

British bookmakers apparently agreed. The Americans were a staggering 6-1 favorite in some betting shops.

“Our players are hell-bent on seeing Beth Daniel eat her words,” European captain Mickey Walker said back then.

That proved the big story with the Euros stunning the Americans in lopsided fashion, 11 ½ to 6½. 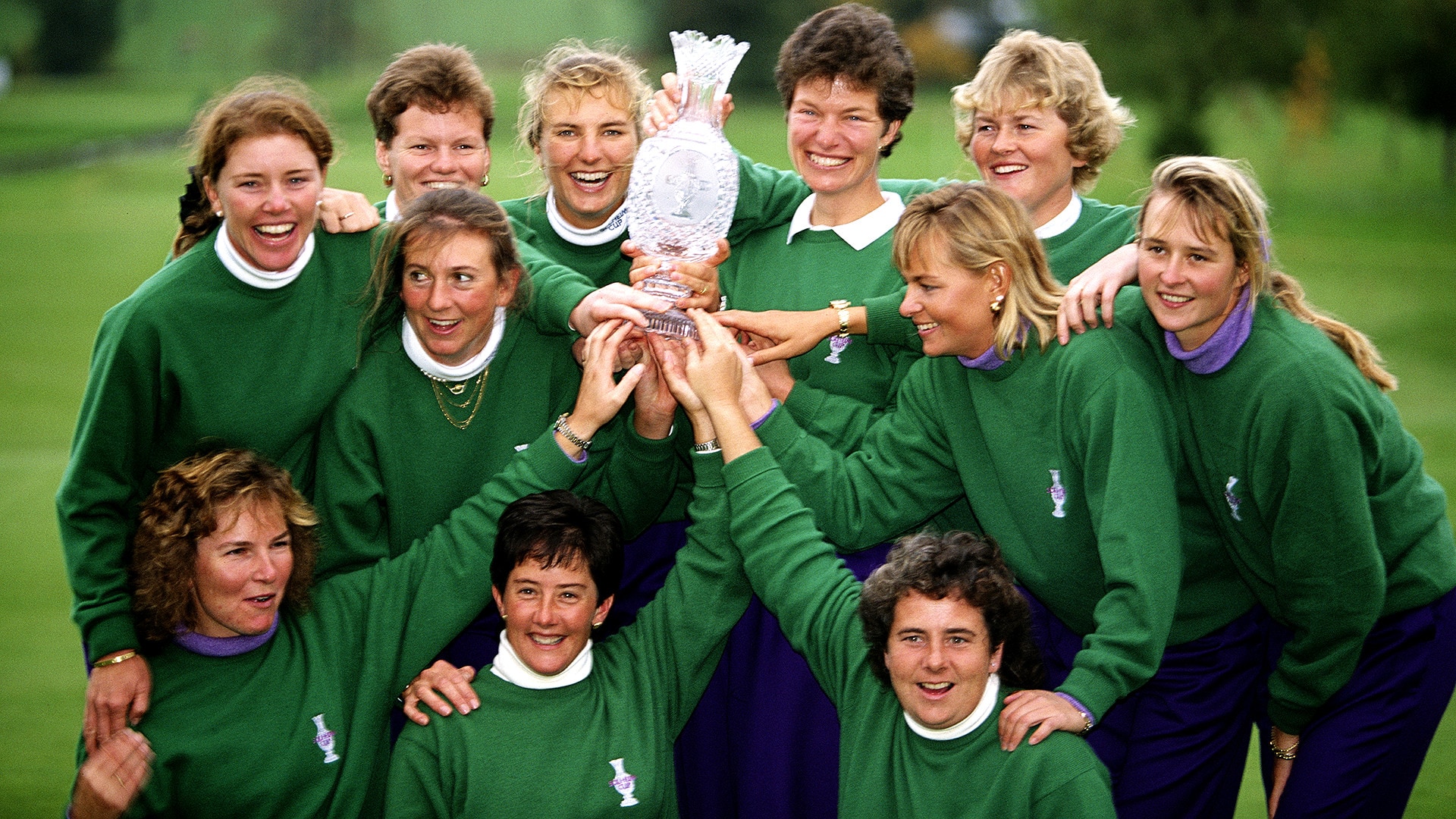 All of a sudden, people were paying attention.

“It was an amazing upset,” Walker says today. “It was, obviously, the biggest upset in Solheim Cup history, but it was a big upset in sport, generally. I’m a soccer fan, and I would liken it to one of the top teams in the premiership getting thrashed by a non-league team three or four leagues below them.”

Sweden’s Helen Alfredsson said it was one of the highlights of her career.

“I guess this is our answer to Beth Daniel,” she told reporters in the aftermath.

The only problem, Daniel insisted, is that she never made the inflammatory comment in question. She denied saying it back then, and she denies it today.

“The quote’s attributed to me, but I never said it,” Daniel said this week. “A lot of those European players were friends of mine, and they were successful on our tour. It would have been a ridiculous thing for me to say.”

Golf Digest stood by its story.

And British reporters rode the story.

“The British media loves that sort of thing,” Walker said.

Alfredsson said the comment “ignited a fire” in the team room.

“Beth was tough on the golf course, but a good friend off it,” Alfredsson said. “She tried to tell us she didn’t make that comment, and we were all thinking, ‘Well, of course, she did.’  Because, really, she was right. They had an amazing team.” 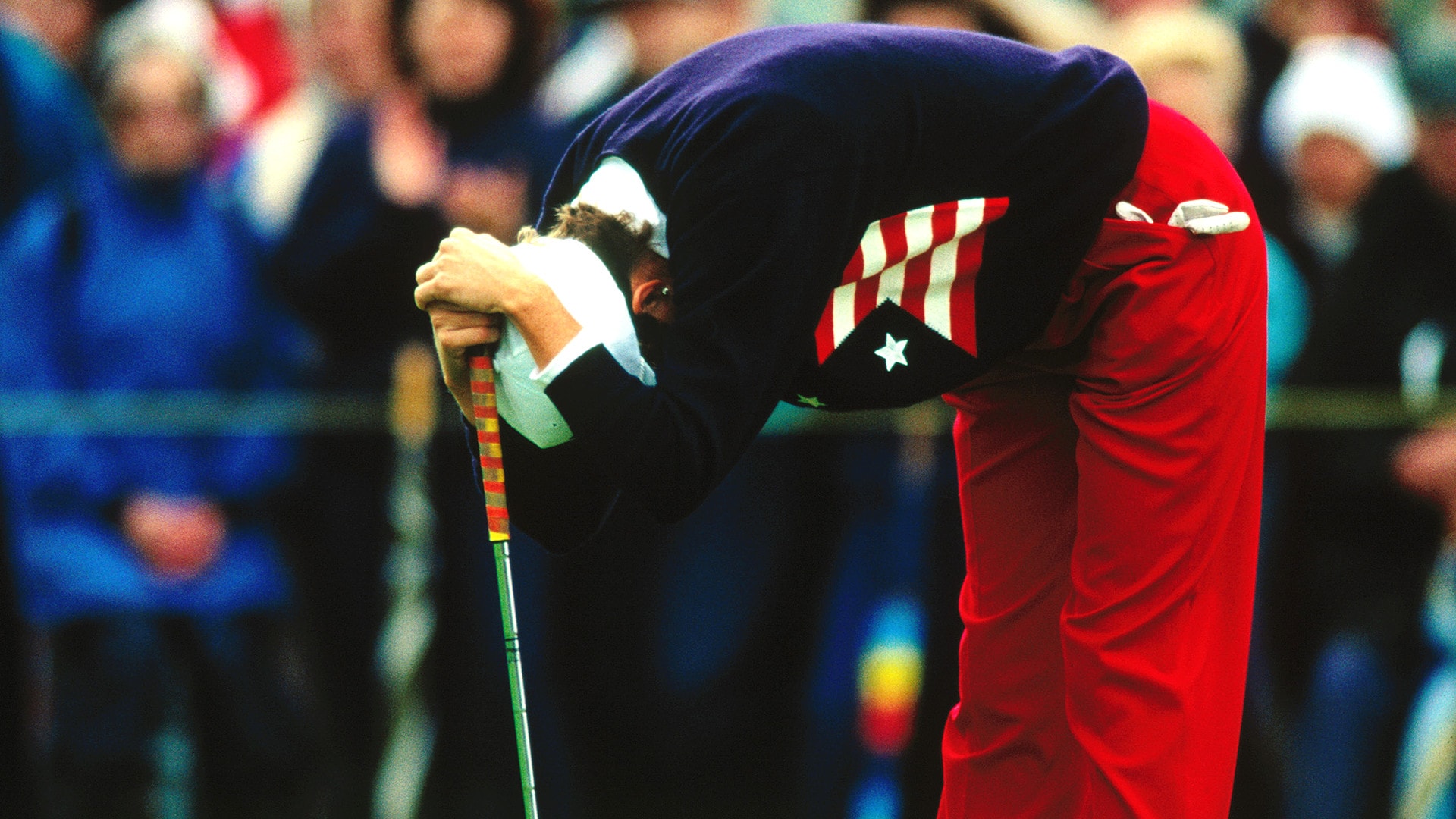 Kathy Whitworth was the American captain at Lake Nona and again going to Scotland. She was the quintessential American winner, who still holds the LPGA record for career victories (88). Her first Solheim Cup team was loaded with major championship winners, including Pat Bradley, Patty Sheehan, Nancy Lopez, Betsy King and Beth Daniel. The team she took to Scotland was even more formidable, with six future World Golf Hall of Famers on the roster, including Juli Inkster, this year’s American captain.

“They had all that era’s biggest names, everybody,” Alfredsson remembers today. “After the way we lost in Lake Nona, we were given absolutely no chance to win. I don’t think we even thought about winning, but we came out and won the first two matches. All of a sudden, it was, like, ‘Hey, they’re beatable.’ We never had that feeling at Lake Nona.”

England’s Laura Davies and Alison Nicholas teamed to take down Daniel and Betsy King in foursomes in the opening match. Sweden’s Alfredsson and Liselotte Neumann beat Pat Bradley and Dottie Pepper (named Dottie Mochrie back then) in the very next match.

“I think what Beth Daniel was quoted as saying was absolutely correct, but you just don’t like being told that,” Walker said. “When you’re aggrieved or angered, it makes you feel like, ‘OK, I’ll show you.’

Walker said Scotland’s typically wet and poor weather was a factor. So, perhaps, was Whitworth’s departure before the matches. Whitworth returned to the United States after receiving news that her mother died. Alice Miller, president of the LPGA at the time, was unexpectedly thrust into the captain’s role with no assistant captains back then.

Walker said Europeans were also surprised hearing one American arrive without even knowing what the format was, then lobbying to try to change it so no player had to sit out in a session. The late bid put off a lot of Euros.

“I think there was some complacency among the American players coming over,” Walker said. “I think a lot of them felt, maybe, they could just turn up and they were going to win.”

Though Daniel is still frustrated by the history credited to her, she acknowledges the European upset elevated the nature of the competition.

“It probably made more people aware of the Solheim Cup in the United States,” Daniel said. “When the U.S. loses any big world event, Americans are more aware. I remember when the U.S. lost the America’s Cup [in yachting]. It was huge news. All of a sudden, that got a lot more attention as a world event.” 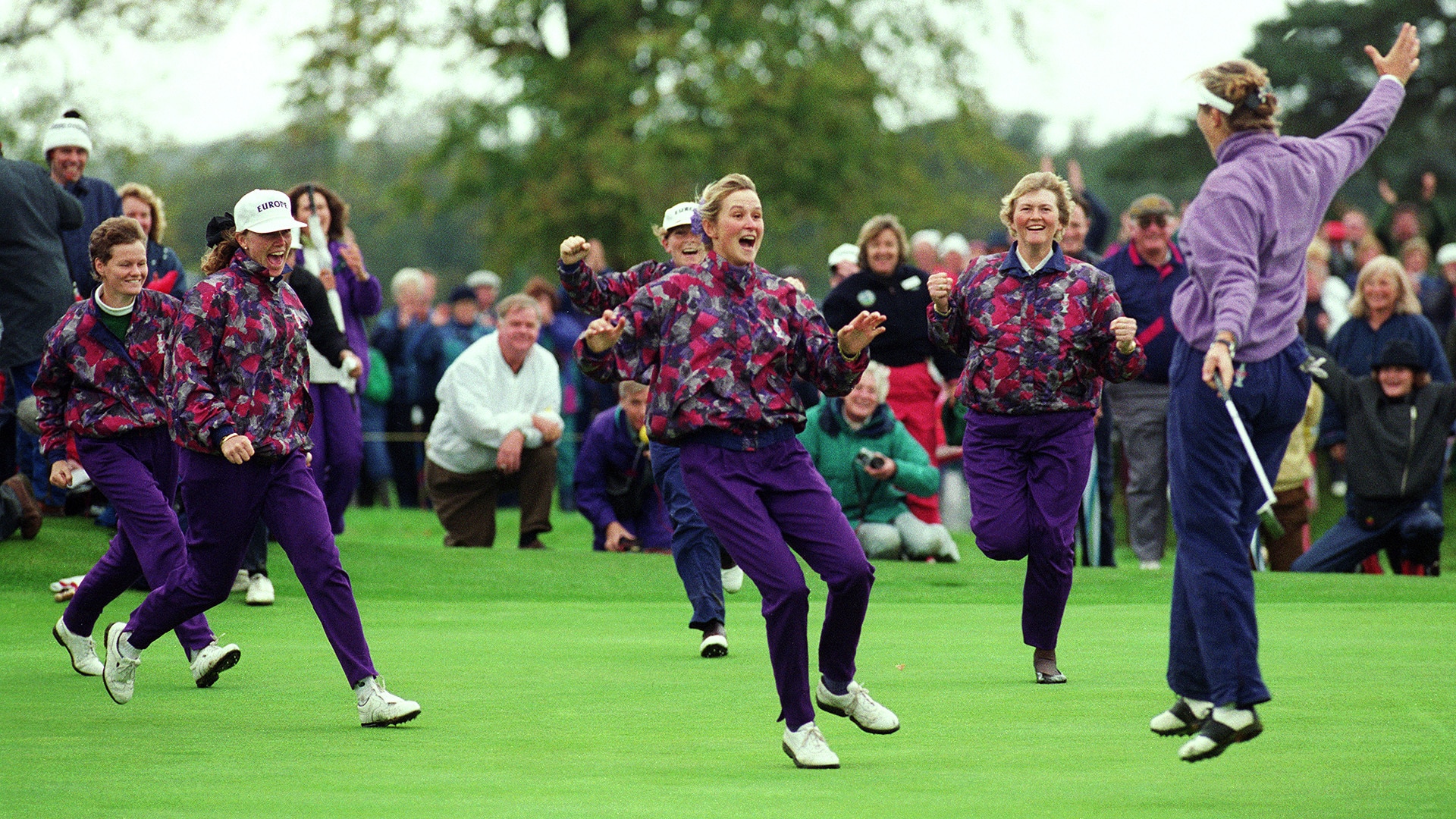 Walker remembers how different the American dynamic was when the Europeans returned to the United States two years after the upset. She remembers how much more the Americans cared when they teed it up at The Greenbrier in 1994.

“I can remember Dottie Pepper dyed her hair red,” Walker said. “She said something like, ‘I’ve been dreaming about this for two years.’ She played like a woman possessed. She was so fired up. She was absolutely brilliant, so difficult to beat. They didn’t really need a captain that year. She was Captain America.”

The Americans won the next three Solheim Cups, all in routs, until the matches returned to Scotland, where the Americans lighted another fire under the Euros.

In 2000, at Loch Lomond, where the weather was awful all week, the Europeans won with their blood boiling yet again, after controversy followed a ruling against European superstar Annika Sorenstam during a weekend fourballs match. That was the year Sorenstam chipped in for a birdie, only to have U.S. captain Pat Bradley invoke a rule to force Sorenstam to replay the shot, because she wasn’t away. It left the tough-minded Sorenstam in tears and the Euros once more outraged.

The Euros went on to win 14 ½ to 11 1/2 for just their second victory in the biennial matches.

And for Europeans in the Solheim Cup, especially satisfying.