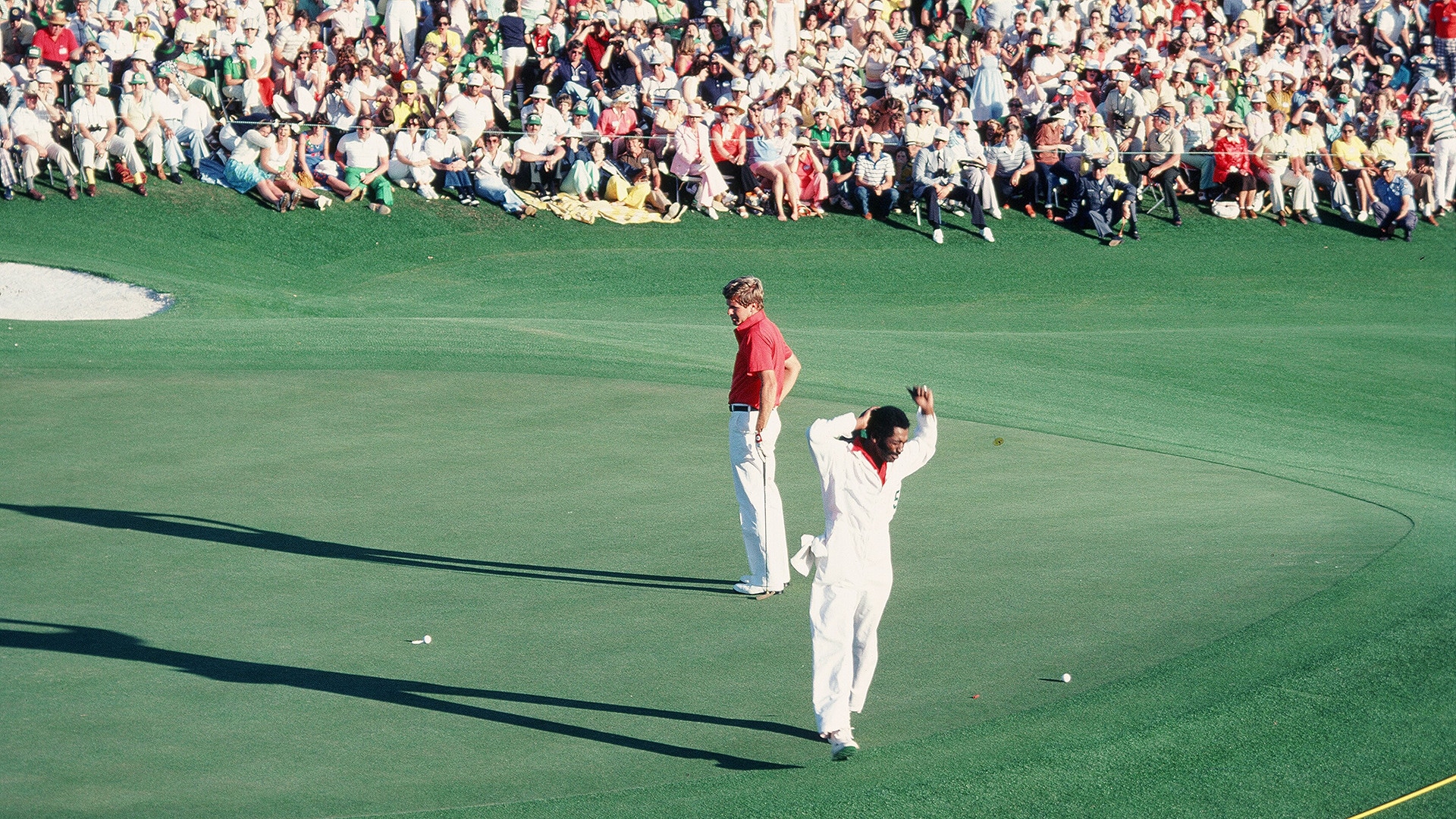 AUGUSTA, Ga. – A select group of men will slip into their green jackets and drive down Magnolia Lane on Tuesday evening for a meal that needs no reservation. They’ll swap stories, swill wine and toast the latest entrant into their exclusive fraternity.

It’s officially the Masters Club, more widely known as the Champions Dinner, and it is without fear of hyperbole one of the most sought-after dinner invites in all of sport.

But if the golf gods had a sense of humor, there might be another group breaking bread somewhere across town. Perhaps they’d find an eatery just down Washington Road, a place where the menu doesn’t change each year. It’d be a gathering of the sport’s almost-men, the ones who slipped one arm inside the green jacket and watched it slip away. Theirs are bittersweet tales, best told over a cold drink or three, but they are as equally stitched into the fabric of this tournament as those of the champions who are about to dig into Patrick Reed’s favorite steak.

And if the calendar is any indicator, they might add another chair to the table of near-champions this week.

After all, it was 40 years ago that patrons witnessed the first-ever sudden-death playoff in Masters history, but it was a situation that resulted only from Ed Sneed’s collapse. Leading by five shots to start the final round, Sneed was still three ahead with three holes to play when everything went horribly awry. A sloppy three-putt on No. 16, a miss from 4 feet on No. 17 and an errant approach on No. 18 all contributed equally to his untimely demise.

Needing just one par over the last three holes to win his first major at age 34, he instead recorded three bogeys to drop into a playoff that also featured Tom Watson and was ultimately won by Fuzzy Zoeller. Sneed would win just once more on the PGA Tour after his ’79 collapse and didn’t finish better than T-44 again at Augusta.

“I never felt at any time like I lost control,” Sneed said at the time. “It just didn’t happen, there’s no other way to explain it. It’s bitterly disappointing.” 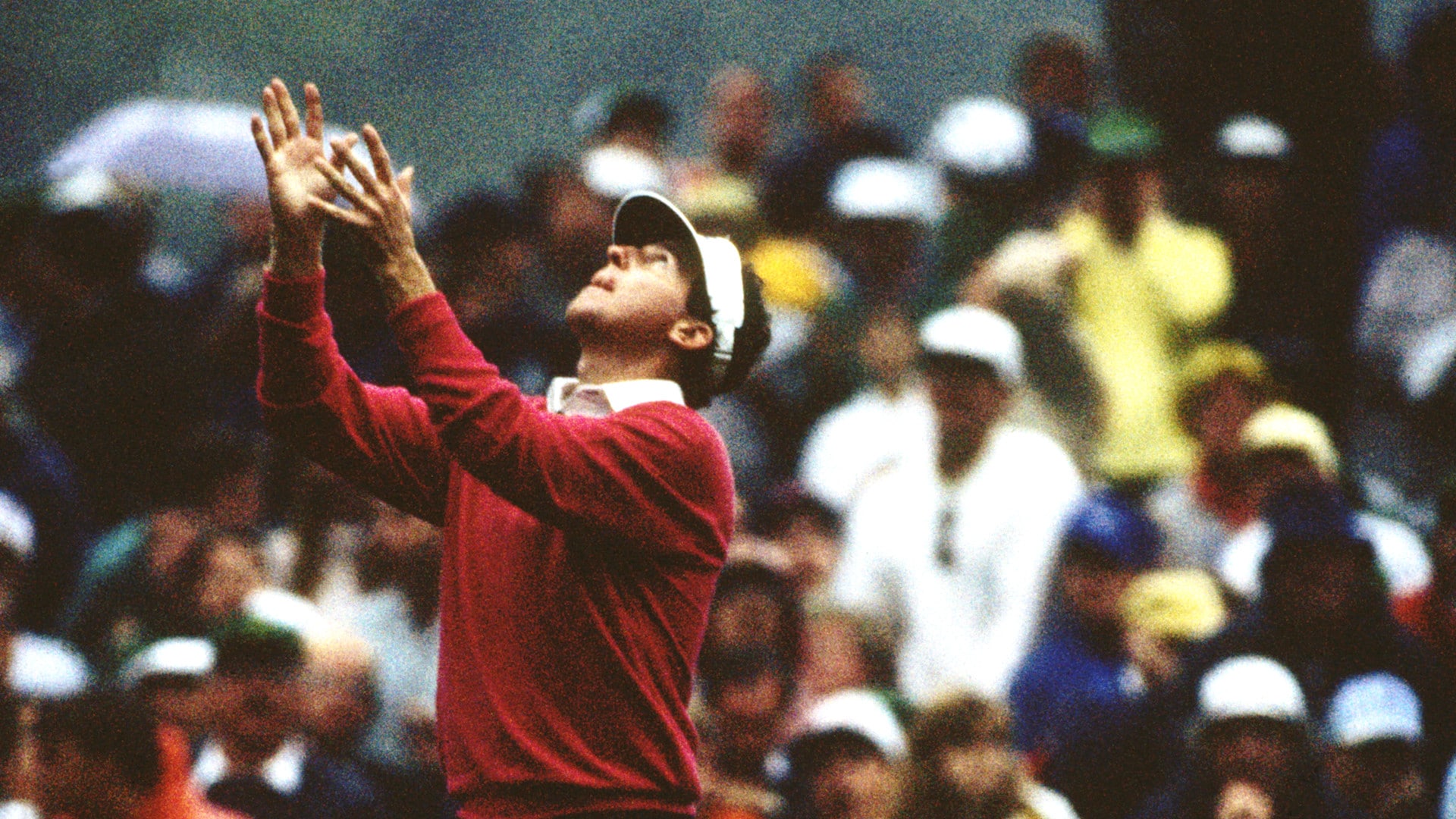 One man who understands bitter disappointment at Augusta National is Scott Hoch. Ten years after Sneed’s misfortune, Hoch stood over a 2 ½-foot par putt on the 10th green that would have ended a playoff with Nick Faldo and, like Sneed, earned him his first major title. But Hoch’s nervy attempt gets replayed today for all the wrong reasons, as the ball barely touched the hole before careening 5 feet past. Faldo won the first of his three green jackets on the next hole.

“I’m glad I don’t carry a gun with me right now,” Hoch said in an attempt at self-deprecation minutes after missing the biggest putt of his career. While he’d enjoy both consistency and longevity in the years following his infamous ’89 miss, racking up PGA Tour wins until age 47, he added only one more top-five at Augusta National and never captured that elusive major.

Greg Norman already had two claret jugs to his credit in 1999 when he returned to a place that had already doled out more heartache to him than any man deserves. The Shark was 44 years old, in the twilight of his career and three years removed from the most famous collapse in Masters history. 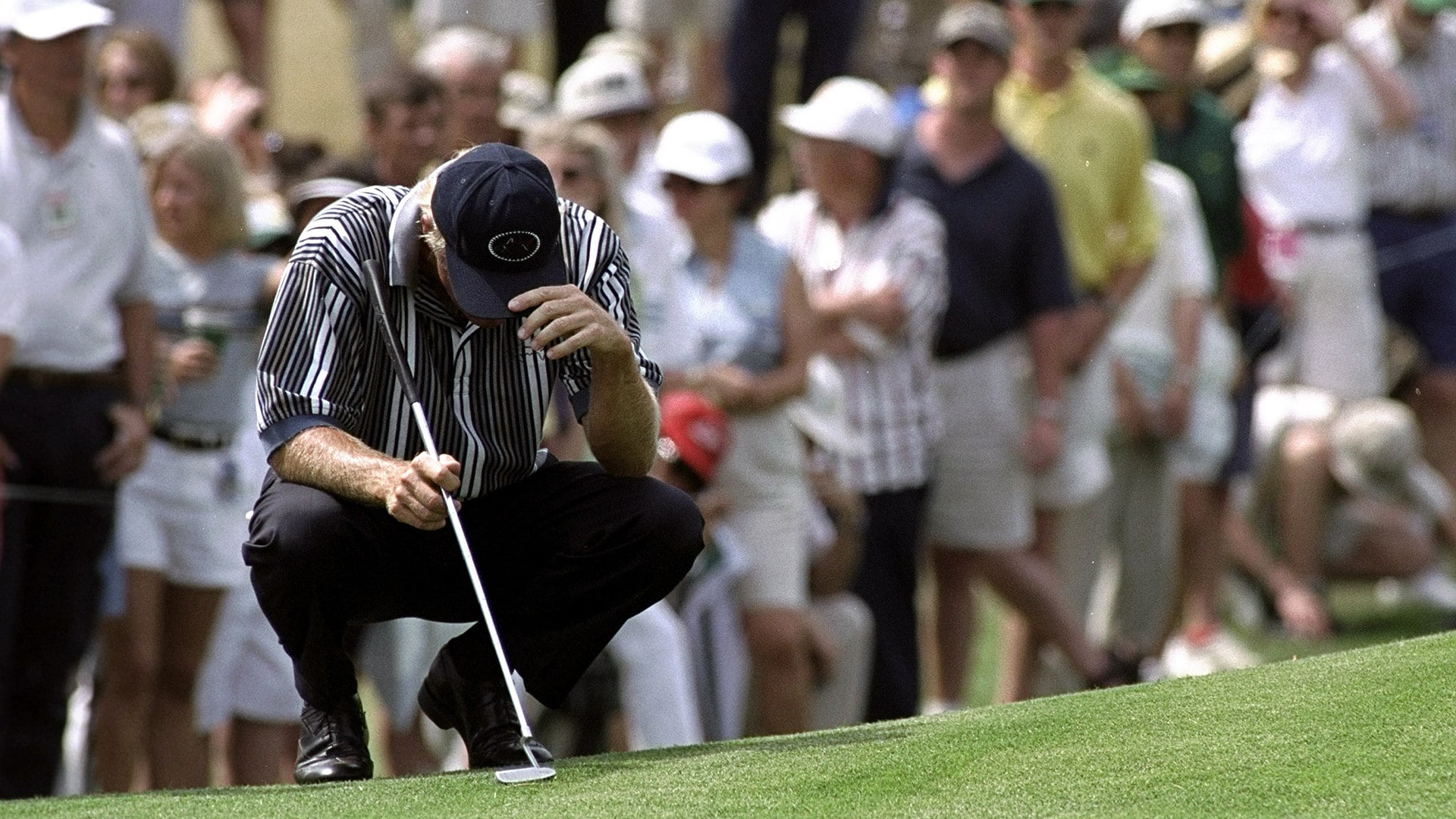 When he played his way into contention, again, there was an unspoken sentiment that this would likely be his last, best chance to win the green jacket that would have already been his if lifetime achievement counted for such things. So when Norman rolled in a 30-footer for eagle at the par-5 13th, one that gave him a share of the lead and sparked a roar that nearly cratered a portion of Amen Corner, the prevailing sentiment was that maybe, finally, it was his time.

Spoiler alert: it wasn’t. Norman would bogey the next two holes, missing the green from 98 yards on No. 15 to snuff out any realistic chance of victory, and he ultimately finished third behind Jose Maria Olazabal and Davis Love III.

It proved to be the last of his nine finishes of T-6 or better at the Masters.

“It was a successful week and a sad week, all rolled up in one,” Norman said.

Another decade later and it seemed like the tournament history books would require a substantial revision. At age 48, Kenny Perry was experiencing a late-career renaissance and appeared poised to eclipse Jack Nicklaus’ record as the oldest Masters champion ever. After uncorking the 8-iron of his life to within inches of the cup on the par-3 16th, Perry strode to the 17th tee equipped with a two-shot lead.

But just as Sneed had 30 years prior, Perry succumbed to the pressure. He skulled a straightforward chip shot over the green on 17, then tugged his final approach shot on the par-4 18th into an unenviable position. Bogey, bogey, playoff. The veteran was rattled and never quite regained his composure, hooking his approach on the second extra hole into a spot on the course where thoughts of victory go to die. Minutes later, he watched Angel Cabrera slip into the jacket that was very nearly his. 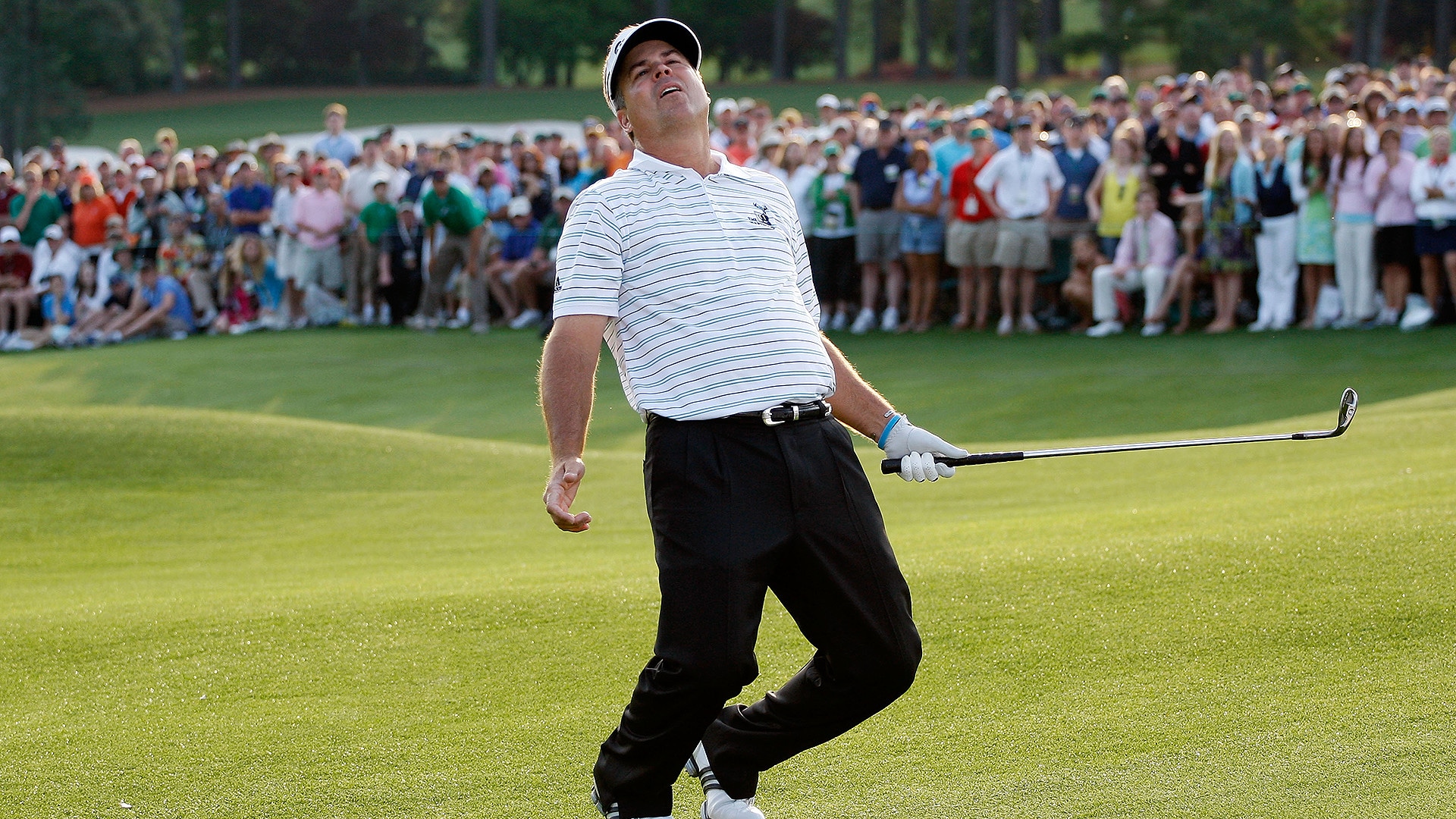 Perry tied for 27th the next year and never played in the Masters again.

“Great players make it happen, and your average players don’t. And so that’s the way it is,” Perry said. “I just didn’t get the job done again, and I’ll look back the rest of my life saying what could have been.”

Perry is not alone in that last part, simply adding his name to the long list of players who would pay dearly for a Masters re-do. But mulligans are lumped in on the lengthy list of no-nos on the grounds of Augusta National.

Perry’s name is still etched in the tournament record books, quite literally on a circular, bronzed water fountain behind the 17th green that lists the tournament winners from each year. Sneed’s is there too, as is Hoch’s. Included with each year and winner are the playoff losers, their names listed just below the respective champions with the distinction “after a tie with.”

But tying for first is not the same as finishing first, especially around these parts.

Of course, Masters what-ifs are not limited to once-per-decade affairs – just ask Jordan Spieth. But then again, he’s still got a green jacket, and a plate full of bone-in ribeye and creamed spinach coming his way Tuesday courtesy of Reed.

As for the others? They’ll be paying their own dinner tab or eating at home, just like every other year, left to wonder what might have been.