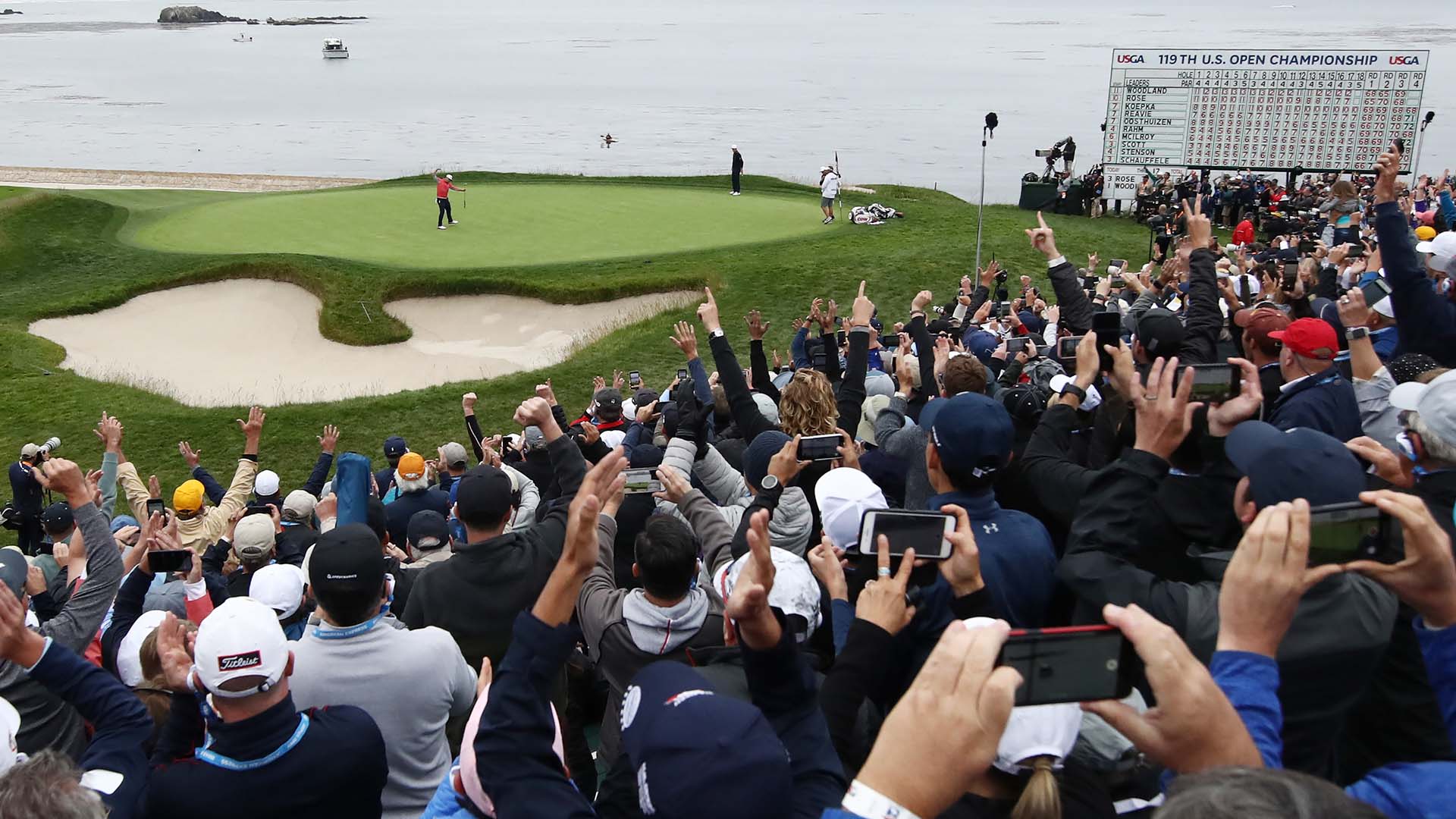 PEBBLE BEACH, Calif. – As the water lapped up gently against the sea wall that guards Pebble Beach's 18th green from Stillwater Cove below, the silence was deafening.

Sure, there were seagulls chirping overhead and the sound of an occasional Ballast Point can being cracked. But as the U.S. Open reached its crescendo, there was nary a peep from the legion of players who trudged off the 72nd green and headed for the waiting courtesy vehicles.

In recent years, the USGA’s hallmark event has become something of a sounding board. Players have felt empowered to speak their mind on all topics from rules to course setup, and the governing body’s inability to stay out of its own way has provided them with ample ammunition.

But this time around, there were no players sounding off. No gripes about the course, be it lacking difficulty or having it heaped on with heavy hands. There was not a rules imbroglio to be found on a calm, cloudy day as Gary Woodland captured his first major title.

“I don’t know how they could have done any better, I really don’t. It was awesome,” said Charles Howell III. “If you hit good shots, you could make birdies and get rewarded. And if you didn’t, it was hard to make a par. Whatever formula, whatever it is they used, it worked.”

Woodland’s winning total of 13 under was a far cry from 2010 when Graeme McDowell took home the trophy by shooting even par, or back in 2000 when every player not named Tiger Woods shot at least 3 over for the week. But coming off a debacle last year at Shinnecock Hills and sustaining a deluge of player criticism in subsequent months, the expectation was always that the USGA might err on the side of caution as the tournament returned to the famed coastal layout.

But Mother Nature also moved the scales in that direction, dialing up four straight days of calm winds and thick air under a lingering marine layer. The blustery breeze that knocked the leaders on their heels back in 1992 never made a single appearance over 72 holes.

“It was the easiest conditions you could possibly have,” said Marc Leishman. “There was no wind, there was moisture in the air, which is probably rare for over here. No silly pin placements. I think it was great, they did a great job. And that means a lot coming from me.”

Leishman wasn’t the only former USGA critic to do an about-face this week at Pebble. Some of the governing body’s most outspoken opponents sang the USGA's praises over the weekend, either in interviews or on social media. Zach Johnson, who claimed they "lost the golf course" last year on Long Island, said the course this year was “just perfect.” There was similar praise from Billy Horschel, who four years after lambasting the greens at Chambers Bay called the setup at Pebble “awesome.”

Even Phil Mickelson, perennial foe of the USGA, found himself in the unfamiliar position of doling out compliments.

“It’s a perfect, hard test,” Mickelson said. “When you struggle a little bit, or if you pull shots like I did it’s very penalizing. And the guys that are playing well, it gives them a chance to separate and make some birdies and reward great shots.”

Granted, those plaudits were somewhat tempered by the setting. Pebble Beach isn’t a course where tees can stretch beyond 7,500 yards, nor is it a place where the glassy greens of Shinnecock needed repeating. It’s instead an iconic layout that, given time to grow up the rough, can easily host a national championship with tiny targets and thin margins for error as the primary defense mechanisms.

“I think Pebble is very difficult to mess up,” said Bryson DeChambeau.

But the course was not immune from criticism nine years ago, when even McDowell questioned the playability of the crispy 17th green. This time around there were no such grievances about playability – all while the verdant layout produced the same type of scoring that drew criticism two years ago at Erin Hills. Some players, though, still pined for the foregone target of par.

Of course, the last time the USGA “dialed it up” players were left to putt on frictionless surfaces on the back nine at Shinnecock. This week’s scoring average, 72.58 across a par-71 layout, wasn’t exactly jarring, but it did reveal the disparity between those in the field who could control their ball and those who spent too much time lashing out of the lush rough.

According to many in the field, much of the credit for that adjustment belongs to Jason Gore. Gore was hired in March as the USGA’s newly-minted senior director of player relations, a former PGA Tour winner brought in to ease the tensions between the locker room and the USGA. On the job for only three months, his efforts drew the praise of multiple players – and the fruits of his efforts were shown in a course that drew almost universal praise.

“I think they heard us loud and clear, which is great,” said DeChambeau. “I think putting Jason Gore in, and having him help set up the course is a very great thing the USGA did. They needed somebody that was a player.”

While the gains this week seem immense in the moment, they could all disappear in a gust of wind once the tournament heads east. Next year’s event returns to Winged Foot, a brutish layout where 5 over was the winning score the last time the U.S. Open came calling, in 2006. After all, the USGA was the toast of the town in 2014 for its innovative championships at Pinehurst, only to follow with a four-year stretch of errors and criticism they’d just as soon forget.

But that’s a year away. For now, the brass in Far Hills can bask in the fact that they managed to pull off their biggest event without becoming a storyline of their own.