From Duel in the Sun II to Tiger's comeback, the top 10 majors of the decade 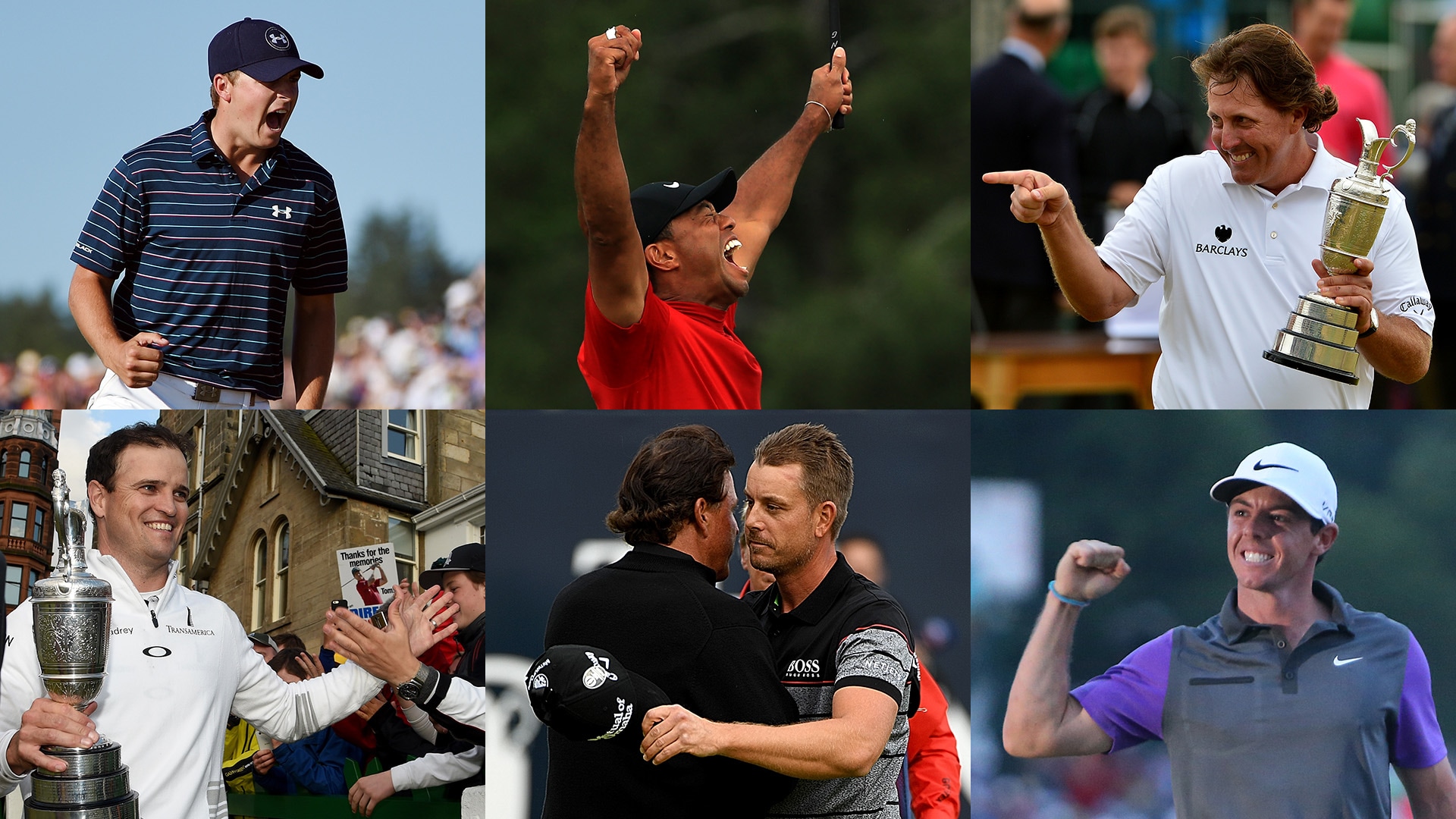 When the claret jug is lifted this weekend along the Irish coastline, another decade of majors will come to a close.

It’s hard to believe that 10 years have passed since Y.E. Yang shocked Tiger Woods and the golf world at Hazeltine, and that 39 (soon to be 40) major trophies have been handed out in that span. There have been plenty of iconic shots, like Bubba Watson hooking and spinning a wedge from the Augusta pine straw in 2012 and Phil Mickelson’s 6-iron from a similar lie two years earlier.

Winnowing down a list of the decade’s majors to the 10 best is no small task. Sure, some events were easier to nix from consideration than others (I’m looking at you, rain-soaked 2016 PGA that nearly required a Tuesday finish). But stopping at 10 meant leaving memorable moments like Ernie Els’ stunning comeback against Adam Scott at Lytham, Justin Rose toppling Phil Mickelson at Merion, Dustin Johnson’s bunker woes at Whistling Straits and Sergio Garcia’s major breakthrough all on the cutting-room floor.

But the fact that those events were left out speaks to the quality of those that made the cut. Without further ado, here's a look back on the top 10 majors of the last decade:

Like another USGA event on this list, the memorability of last year’s U.S. Open stemmed somewhat from the regrettable theatrics of the penultimate day. After preaching all week that they had learned the lessons of 2004, tournament officials once again lost control of the course Saturday afternoon as leaders battled an impossible combination of blustery winds and glassy greens. Of course, all of that took a backseat to Phil Mickelson’s antics on the 13th hole, where he purposely hit a moving ball and sparked a roiling debate over the DQ that wasn’t. Sunday saw Tommy Fleetwood surge from the pack with a closing 63, Patrick Reed flirt with a second straight major and Dustin Johnson narrowly miss out on a second of his own. But in the end it was Brooks Koepka, seemingly left behind after an opening 75, steady his nerve to become the first player in nearly 30 years to go back-to-back at the most grueling major.

One month after coming painfully close at Merion, Phil Mickelson got redemption at the tournament he was least expected to win. Lefty’s final-round 66 on a browned-out Muirfield, complete with a claret jug-clinching birdie at the last, gave him his fifth major title at age 43. But it was a tournament that will also likely be remembered as the last best major chance for Lee Westwood, who turned a two-shot lead after 54 holes into a T-3 finish, while Tiger Woods starting the final round two shots back before faltering. There wasn’t a weak spot on the final leaderboard, as every top-10 finisher – from Mickelson and Henrik Stenson to Hunter Mahan and Francesco Molinari – played in multiple editions of either the Ryder Cup or Presidents Cup.

This one made the list as much for what happened on Friday as Sunday. Tiger Woods’ wedge to the 15th hole during the second round – and subsequent incorrect drop – sparked a rules debate that threatened to overshadow the tournament while officials met to discuss whether the four-time champ should be disqualified. He ultimately wasn’t, but the shots he lost between the retroactive penalty and an otherwise accurate approach hitting the flagstick and bouncing into the water ultimately meant the difference between contending for a win and taking home a nice check. In the end the theatrics were reserved for Adam Scott and Angel Cabrera, with the Aussie sparking a rain-soaked celebration with a birdie on the 72nd hole only to be answered moments later by an even better shot from Cabrera, in search of his second green jacket. With a curling birdie putt on the second playoff hole, Scott redeemed himself from a blown chance at Lytham the previous year and became the first Aussie to win the Masters.

The ground in greater St. Louis may still be shaking after last summer’s prize fight between the Player of the Year and the player of the generation. Gary Woodland led after each of the first two rounds, a prelude of what was to come this summer, but by Saturday night it was Brooks Koepka on top as he sought his third major in 14 months. Not to be outdone was Tiger Woods, in the midst of a comeback for the ages and still in search of his first win in nearly five years. Woods put forth a stern effort on Sunday, birdieing six of his first 13 holes to get within one, but it wasn’t enough. Koepka used two late birdies to break a tie with Adam Scott and went on to win the first of two straight PGA titles.

Don’t let the winner’s name take away from the fact that this final round was absolutely insane. What seemed like a coronation for Rory McIlroy became anything but, as a whopping eight players held at least a share of the lead on Sunday. That included the likes of Adam Scott and Jason Day, both in search of their first major, and Tiger Woods, whose furious front-nine rally fizzled out (but not before authoring one of the most-replayed shots of his career into the 15th hole). With major champs (Angel Cabrera, Geoff Ogilvy) and a former world No. 1 (Luke Donald) also in the mix, it was unheralded Charl Schwartzel who earned his first win of any kind on Tour while becoming the first player in Masters history to birdie each of the final four holes en route to victory.

The only downside of this Open was that it got pushed to a Monday finish for the first time since 1988 when winds and rain wiped out nearly an entire day of play. But consider that this tournament featured the swan song over the Swilcan Bridge of five-time champ Tom Watson, an amateur (Paul Dunne) sharing the 54-hole lead and another (Jordan Niebrugge) finishing T-6 all along the backdrop of the most historic piece of land the game has to offer. Oh, and there was Jordan Spieth’s bid for three majors in a row, seemingly alive after a miracle birdie on the 70th hole, only to be undone by the closing stretch at the Old Course. The proceedings ended in a three-hole playoff, with Marc Leishman faltering first before Louis Oosthuizen’s attempt for two straight St. Andrews Opens came up short. Enter Zach Johnson, who locked up a Hall of Fame resume with a claret jug to join his green jacket.

This may have been memorable for all the wrong reasons, but it was memorable nonetheless. A rare trip to the Pacific Northwest to a browned-out course that players compared to a lunar colony with greens that were likened to produce. It wasn’t an easy week for USGA officials, who in hindsight admitted the putting surfaces weren’t up to par and who took some criticism for the interchangeable par on Nos. 1 and 18. But in the end the tournament came down to the two best players, as most majors would prefer, with Jordan Spieth authoring back-nine heroics and Dustin Johnson seemingly poised for a breakthrough. But a 12-footer for the win slid by the edge, as did a 4-footer to force a playoff. Spieth left Washington with his second straight major and realistic thoughts of the single-season Grand Slam.

The only major on this list to finish in the dark. It was a chaotic close to an eventful week in Kentucky, with rain delays pushing the final moments well past sunset. This was Rickie Fowler’s best shot at a major in a year that included four top-5 finishes, and Phil Mickelson came within inches of forcing a playoff. But it was Rory McIlroy’s moment, as the Ulsterman closed out the best run of his career by winning two majors and a WGC in a three-start span. The dramatics of the 72nd hole won’t soon be forgotten, as McIlroy and Bernd Wiesberger hit into the group ahead of them (Mickelson and Fowler) and played the last hole essentially as a foursome in order to finish the tournament before nightfall, all amid plenty of debate from a certain left-handed contender.

The modern version of the Duel in the Sun. While many tournaments on this list were wide-open affairs, the third-place finisher at Troon (J.B. Holmes) finished 11 shots behind the runner-up. This was a two-man affair for the ages between Henrik Stenson and Phil Mickelson, with Lefty getting in the first blow after an opening 63 as he sought his second Open title. But Stenson was not to be denied, taking a one-shot lead into the final round and beating back Mickelson’s closing 65 with a 63 of his own that included four birdies over his final five holes. Stenson’s 20-under total broke the aggregate scoring record for all majors, no small feat considering only four players finished the week better than 4 under.

There were several amazing finishes to majors over the last 10 years, but only one sent ripple effects through the history books. Tiger Woods’ comeback victory this spring at Augusta National offered a rare moment for fans and players alike to realize they were witnessing history in real time. Years from now, tales will be told of where folks were when Francesco Molinari’s ball found Rae’s Creek at 12, or when Brooks Koepka’s final birdie attempt grazed the edge, or when Woods finally tapped in to end an 11-year major drought and bolster the lore of his legend. And they’ll all be told with the same gusto that the previous generations spoke of Jack Nicklaus’ victory on the same grounds 33 years before.