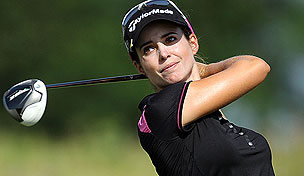 Getty Images
AVONDALE, LA - APRIL 24: Lucas Glover sits on a bench on the 14th tee during the second round of the Zurich Classic at TPC Louisiana on April 24, 2009 in Avondale, Louisiana. (Photo by Dave Martin/Getty Images)  -

CARLSBAD, Calif. – Beatriz Recari had three-putted No. 18 in regulation and again on the first hole of a playoff with I.K. Kim as dusk approached Sunday.

Here she was again, with a chance to win the Kia Classic.

This one was true enough that Recari began her victory celebration even before her 18-foot birdie putt from the fringe rolled into the cup.

The 25-year-old from Pamplona, Spain, raised her right fist and, after the ball rolled in, raised both arms in the air and smiled.

She later put her hands to her face and wiped away tears as her caddie boyfriend, Andreas Thorp, put his arm around her.

''There was a lot going on,'' Recari said. ''I had a good feeling, but the same as the other putts. The other ones went by and missed the hole. This one went in. I had the same process and the same shot. Nothing different. I'm always trying to do my best. It just dropped in.''

It was her first LPGA Tour victory since her rookie season of 2010.

Recari said she was emotional because she was thinking of ''all those people that have been there with me no matter what. ... And at the same time I just couldn't believe that the ball was in the hole and like it was over and that I won. It was a lot. Part of it I still don't remember. Just a lot of emotions. It's a different win; it's my first in a playoff. It's a lot of different things, different situation. I'm definitely more emotional than my first and I don't know what my third will bring.''

The tour is off next week before the first major of the year, the Kraft Nabisco Championship in Rancho Mirage.

Recari and Kim three-putted No. 18 in regulation and on the first playoff hole.

Recari, who brought a two-stroke lead into the day after three bogey-free rounds, had a chance to win in regulation. But, like Kim in the twosome ahead of her, she three-putted the par-4 18th – including a 6-footer that would have won it had she not rolled it past the hole. Recari closed with a 2-over 74 to match Kim at 9 under at Aviara. Kim shot a 71.

They teed off on 18 again and both players three-putted. With the sun setting and the temperature dropping, they played the hole again.

Kim had a 30-foot putt on the second playoff hole and rolled it left before Recari made the winner.

Recari wasn't sure if she and Kim were missing the putts on the big green because of shadows cast by the grandstands or because it was lumpy after a full day of golf.

Recari, who hit a 3-wood off the tee all three times on 18, said she was more aggressive on the second playoff hole, when she hit a 6-iron on her approach.

Recari went 59 holes before carding her first bogey in the tournament.

Kim bogeyed four of her last eight holes in regulation. A South Korean player, now based in Rancho Santa Fe, Kim won the last of her three LPGA Tour titles in 2010.

On the par-4 16th, Kim had a great drive to about 10 feet and fell to her knees as she just missed an eagle putt. It was the same hole where Recari had an eagle on Saturday.

Cristie Kerr, Pornanong Phatlum and Mo Martin tied for third, a stroke out of the playoff. First-round leader Jane Park was another stroke back along with Lizette Salas and Hall of Famer Karrie Webb.

Stacy Lewis, playing for the first time as the world's No. 1 ranked player, was in a group of four at 6 under after closing with a 73. She was coming off consecutive victories in Singapore and Phoenix.

Paula Creamer, who started the day three shots off the lead, had five straight bogeys and seven overall in her final-round 77.

DIVOTS: Recari won $255,000 from the $1.7 million purse. ... She made 57 starts between victories. ... Recari holds the fourth-longest streak of consecutive cuts made with 38. She trails Karrie Webb (49), Creamer (47) and Jiyai Shin (41). ... Sunday evening, Creamer tweeted a picture of a glass of red wine. ''This pretty much sums up my day..... #muchneeded,'' her tweet said. A few minutes later, she tweeted: ''I just didn't have my A game today. I didnt even have my C game. That's golf.'' ... Lewis had two double bogeys on the back nine, including No. 18 when her drive went into the water on the right side of the fairway. After taking a drop, her next shot wasn't much better, landing behind a big rock. Her only choice was to chip out onto the fairway. ... Lewis found the water quite a bit on the hilly, 6,593-yard course designed by Arnold Palmer. 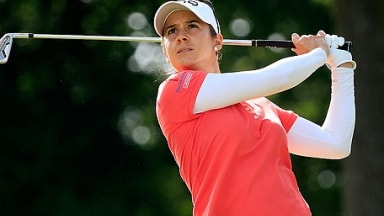