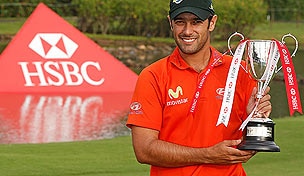 SAO PAOLO, Brazil – Chile's Benjamin Alvarado shot a 2-under 69 on Sunday to win the Web.com Tour's Brasil Classic by one stroke at the Sao Paulo Golf Club.

Alvarado, the third-round leader, finished at 19-under 265 and edged South Africa's Dawie van der Walt (66) and by two over American Kevin Kim (68). It was the Web.com Tour's first event in Brazil.

Alvarado, the first player from Chile to win in the Tour's history, found out just last week that he got received a sponsor exemption into the tournament. Now the former Arizona State standout not only has Tour status through 2014, he also took a big step toward the PGA Tour next year.

His first-place check for $121,500 moved him to No. 2 on the money list through the first five events.