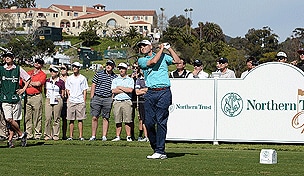 Getty Images
VIRGINIA WATER, ENGLAND - MAY 20: Alvaro Quiros of Spain plays an iron shot from the trees at the 12th hole during the first round of the BMW PGA Championship on the West Course at Wentworth on May 20, 2010 in Virginia Water, England. (Photo by Richard Heathcote/Getty Images)  -

Yes, his great uncle, Bob Goalby, and his father, Jay, won a combined 20 PGA Tour titles, but what they handed down was more like a shovel.

Bob and Jay were from the Hogan School of Golf; you dig the secrets out of the dirt yourself.

With a 7-under-par 64 Saturday, Bill Haas shot to the top of the leaderboard at the Northern Trust Open. It was the round of the day at Riviera Country Club by a whopping three shots. At 12-under 201, Haas is in good position to become the eighth player to win this event in back-to-back years. He’s three shots ahead of Webb Simpson, Charl Schwartzel and John Merrick.

“Bill’s 7 under was incredible out there,” Simpson said. “It was very tough.”

Haas has a nice cushion going for his fifth PGA Tour title, but he isn’t taking anything for granted. His father taught him that.

Basically, his father was telling him to keep the shovel working, keep digging for the game’s fortunes.

Jay Jr. is Bill’s caddie. At 31, he’s a year older than his brother. Jay Jr. was a good player himself, but he will tell you not as good as Bill. He will also tell you about the shovel that was handed down to them.

Playing the BMW Charity Pro-Am a few years back, Jay Jr. was warming up on the range with his father watching. Jay Jr. wanted to know what his father thought of his swing.

“Son, you need to be able to hit the ball lower,” Jay told his son.

“I’m not going to tell you how to do it,” his father said.

Basically, Jay Haas Sr. was steering his son to the shovel and telling him to work it out himself.

“That’s how Dad’s always been, and I think he got that from his Uncle Bob,” Jay Jr. said.

Bill Haas can do something Sunday that neither his father nor his great uncle ever did. He can successfully defend a PGA Tour title. Bob and Jay Sr. never won the same tournament in back-to-back years.

If Bill can hold on and win, he’ll join good company as repeat champs in this tournament. Ben Hogan, Arnold Palmer, Phil Mickelson and Macdonald Smith are among those who did it.

“I think I’ve just got to try to stay in the moment, don’t let my emotions get the best of me,” Bill said.

That formula worked well for Bill last year, when he defeated Phil Mickelson and Keegan Bradley in a playoff at Riviera. The place was going nuts for Mickelson to the point that Haas wondered if folks even knew he was there, but Haas wasn’t fazed.

“That was the most relaxed I’ve ever seen him in a pressure situation,” Jay Jr. said. “He seemed so comfortable.”

Bill will be paired with a fellow Wake Forest alum, Webb Simpson, and Charl Schwartzel. Both are major championship winners. Bill should be prepared for the spotlight here again. He opened this week playing with Mickelson and Bradley in the first two rounds in a reprisal of their playoff pairing of a year ago. He responded the way he always tries to respond. He worked the shovel. He figured out how to get back atop that leaderboard again. Come Sunday, he'll be digging for another win.