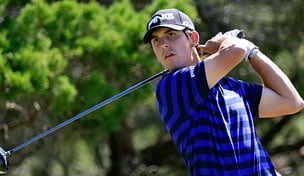 No, the player who has seen the most consecutive weekends isn’t a superstar. In fact, he’s never even won.

That said, Billy Horschel is starting to make a name for himself as one of the game’s most consistent players. His rounds of 68-72 at the Shell Houston Open easily put him inside the cut line for his 20th straight PGA Tour start, breaking a tie he previously shared with Poulter.

He hasn’t completely made those weekend appearances count, though, with only two top-10s during his streak.