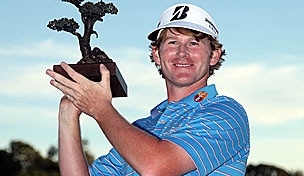 SAN DIEGO – Brandt Snedeker hasn’t enjoyed the level of success Tiger Woods has at Torrey Pines, but he might love the place just as much.

Snedeker, who has four PGA Tour titles, won the Farmers Insurance Open last year, coming from seven shots behind in the final round and beating Kyle Stanley in a playoff.

The victory just added to Snedeker’s special feelings for the course. He shot 61 in the first round the first time he played a PGA Tour event at Torrey Pines in ‘07. He ended up finishing third in what was only his third start as a rookie.

“This is a place that’s very near and dear to my heart,” Snedeker said. “This is kind of where my career started, and I’ve had a lot of success over the last four or five years. So, I love coming here.'

Snedeker is looking to become the first player to repeat as champ of the Farmers Insurance Open since Woods capped off a run of four straight titles in '08.

“The golf course is in great shape, and my game feels really good,” Snedeker said.