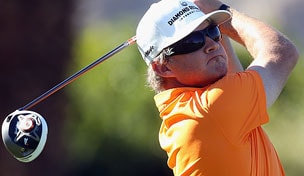 Gay was six shots back of 54-hole leader Scott Stallings to start the day, but posted a bogey-free 9-under 63 to get him in a three-way tie at 25 under 263 through 72 holes.

Gay and Howell both birdied their first playoff hole to advance while rookie Lingmerth hit his second shot in the water at the par-5 18th.

Howell hit his approach shot at the second playoff hole, No. 10, in the bunker and failed to get up and down for par. Meanwhile, Gay knocked his second shot into the par-4 10th to six feet and only needed a two-putt for the win. Instead, he drained his birdie.

Stallings bogeyed his final hole to drop to 24-under 262 and miss out on a chance at the playoff.