Villegas grabs Honda lead in Round 1 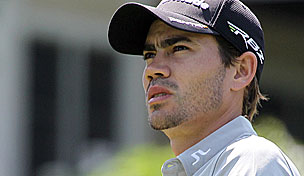 PALM BEACH GARDENS, Fla. – With one bold swing, Camilo Villegas turned a solid round at the Honda Classic into his lowest start in more than a year.

Villegas drilled a 3-wood from 263 yards over the water to about 8 feet for an eagle on the par-5 18th hole at PGA National for a 6-under 64 that gave him a one-shot lead and another jolt of confidence as he tries to regain his status on the PGA Tour.

Branden Grace was bullish when it came to the Bear Trap by making birdie on all three holes of the notorious stretch late on the back nine. He made it four in a row with a birdie on the 18th hole and was at 65 with Rickie Fowler, Graham DeLaet of Canada and Robert Streb.

Defending champion Rory McIlroy and Tiger Woods each opened with 70 and walked away feeling much differently about their day.

Woods played in the cool, cloudy morning and was in danger of a big number late in his round when he decided to take off his socks and shoes, don rain pants and step into a creek to play a ball half-submerged in the water. Instead of taking a drop that could have led to double bogey, he escaped with par and rallied for a 70.

''I wasn't trying to advance it very far, just make sure I got it back in the fairway and give myself some kind of wedge shot in there, which I did,'' Woods said.

McIlroy was 1 under for his day when his wedge from 105 yards sailed over the 18th green. He chipped to just inside 8 feet and took bogey when he missed the putt. It felt even worse coming on the easiest hole at PGA National, which played about a half-shot below par.

''I only had 105 yards in for my third shot and ended up taking a 6,'' McIlroy said. ''Wasn't the nicest way to finish. I saw enough pretty good golf out there to be positive going into the next few days.''

Villegas will take just about anything positive at this stage in his career.

Just four years after his back-to-back wins in FedEx Cup playoff events and climbing to as high as No. 7 in the world, the 31-year-old Colombian went into a slump so bad that over the last 18 months he lost his card last year and didn't earn it back in Q-School. A popular draw, he has received ample sponsor exemptions to get through the year and can build a full schedule. But he was middle of the pack in the Humana Challenge, and then missed the cut at Torrey Pines and Pebble Beach.

''This game is great when you're playing good,'' Villegas said. ''When you're out here missing cuts and missing cuts, I don't care what people say. Yes, we're blessed to have this job, but it's not that much fun. ... The game was kicking my butt a little bit. That's a good way to put it. But I know who I am. I know I belong out here. I know how good I can be, and therefore, that's why you're just going to keep your head up and keep working.''

It was his lowest round since a 63 to start the Humana Challenge a year ago.

Villegas won the Honda Classic in 2010 at PGA National, so at least he has that to build on. Despite the good start, he wasn't afraid to risk ruining the day on the last hole.

Grace, part of the core of young South Africans on the rise, played the Honda Classic for the first time, though he had heard plenty about the water and trouble on Nos. 15, 16 and 17 that was dubbed the Bear Trap in honor of course designer Jack Nicklaus. He saw it on TV and talked to Charl Schwartzel about it last week.

And he brought a little trepidation with him to PGA National.

''I sat down with Charl last week at the Match Play and he said, 'Listen, the four finishing holes are quite a beast out there.' So I was a little nervous coming here,'' Grace said. ''I just thought, 'What's going to happen around that corner?'''

The first one was easy after a tee shot into 2 feet on the par-3 15th. He holed birdie putts of about 18 feet on the next two holes, and then his 3-iron barely cleared the water in front of the green on the par-5 18th, leading to a simple up-and-down to finish in style.

Dustin Johnson, coming off two missed cuts and a first-round loss in the Match Play, sorted out his issues with the driver and opened at 66 to join a group that included Lee Westwood, Sean O'Hair, Boo Weekley and Ben Kohles, who won back-to-back Web.com Tour events last year in his two starts after turning pro to earn a tour card.

Woods didn't hit it all that poorly, except for his tee shot on the par-4 sixth, with the tees moved forward 40 yards. He drove it left and down the bank into the water. Because of where it first crossed the hazard, he would have had no chance to get near the green after a penalty drop. Woods saw enough the ball to give it a shot.

He removed his shoes and socks as the gallery came to life. The ball shot out with a big splash, leaving Woods about 80 yards to a front pin. He hit wedge to 8 feet and saved par.