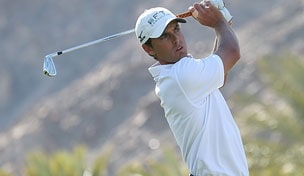 HUMBLE, Texas – Despite a wild second round at the Shell Houston Open, the Masters hopes of Charles Howell III are still alive.

Howell carded four birdies and four bogeys during an even-par 72 that still left him well inside the cut line entering the weekend.

An Augusta, Ga., native, Howell likely needs a fourth-place finish to earn enough Official World Golf Ranking points to be inside the top 50 at week’s end, which would qualify him for the year’s first major.