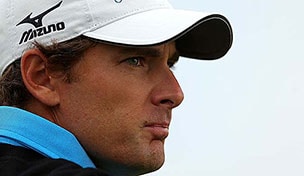 PALM BEACH GARDENS, Fla. – For Charles Howell III, every round of the 2013 season has brought him increasingly closer to a return trip down Magnolia Lane.

A week after defeating Tiger Woods at the WGC-Accenture Match Play Championship, Howell is again in contention, sitting in a tie for fifth place after a 1-over 71 in the third round of the Honda Classic.

'I just hung in there. My short game was good and I scored well,' explained Howell, who carded a pair of birdies against three bogeys Saturday and is 5 under after three rounds. 'The golf course is the big story right now.'

Having begun the year outside the top 100 of the world ranking, the native of Augusta, Ga. has worked his way back to 64th in the world entering this week. Needing to crack the top 50 by month's end to earn a berth in The Masters, Howell knows a high finish at PGA National could go a long way.

'With a day like we're going to have tomorrow, I think you could have quite a lot of guys in it,' said Howell, who finished T-19 last year at Augusta National in his first appearance since 2008. 'Beyond worrying about anything else, it's still a really hard day out there tomorrow.'

Unable to make a birdie until the 15th hole Saturday, Howell was one of many players that credited their struggles during the third round to windy course conditions.

'This is the wind we've come to expect here, but when you play a couple days when it's calm, it kind of lulls you a bit,' added Howell, who will begin the final round three shots behind co-leaders Luke Guthrie and Michael Thompson. 'Maybe we shouldn't have made any comments about it.'