Chase for No. 1 resumes on LPGA Tour 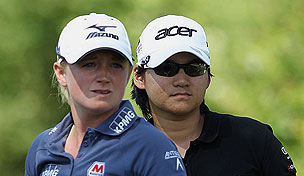 Getty Images
VERONA, NY - OCTOBER 03: Matt Kuchar tees off on the on the 5th hole during the third round of the 2009 Turning Stone Resort Championship at Atunyote Golf Club held on October 3, 2009 in Verona, New York. (Photo by Chris Trotman/Getty Images)  -

It’s all about the chase.

All the top players are in hot pursuit of Yani Tseng in women’s golf.

The LPGA’s 2013 season begins this week at the ISPS Handa Women’s Australian Open with a pack of challengers looking to ratchet up the pressure on the Rolex world No. 1.

Will Tseng rebound from last year’s struggles and ward off her challengers with a fast start at Royal Canberra Golf Club?

Or will American Stacy Lewis build on her sizzling run of a year ago and make another big move to overtake Tseng? Lewis became the first American in 18 years to win the LPGA Player of the Year award last season.

How about 15-year-old amateur sensation Lydia Ko? Is she good enough to send a message to Tseng this week? Ko has climbed to No. 30 in the world with three victories and two second-place finishes in just 12 professional starts. She is paired with Tseng in the first two rounds of this week’s Women’s Australian Open. Ko is also scheduled to play next week’s Honda LPGA Thailand, the Kraft Nabisco Championship in April and the U.S. Women’s Open and Ricoh Women’s British Open this summer. How high can this phenom climb in the world rankings?

With world No. 2 Na Yeon Choi waiting to make her start in Thailand next week, Lewis is the next highest ranked player in this week’s field to Tseng. At No. 3, Lewis is eager to keep climbing.

“My goal every week last year was just to be in contention going into Sunday,” Lewis said. “That doesn’t change.

“Ultimately, I do want to be No. 1 this year. That’s kind of in the back of my mind. For me, I have to have the short-term focus. I can’t think about player of the year, or winning the money list. You can’t think about that now. It’s just about giving yourself chances to win.”

Tseng’s challengers will be attuned to what kind of form she shows in her 2013 debut this week. Tseng, 24, looked vulnerable through much of last year. Players will sense a real opportunity if she gets off to a sluggish start this season.

Since April of last year, Lewis has won four LPGA titles. Tseng is looking for her first title in 10 months.

Tseng’s run at No. 1 will reach exactly two years on Saturday. While 15 wins in 15 months helped her build a giant lead in the world rankings early last year, the lead is shrinking rapidly.

It means if Lewis or Choi can win a couple events early and Tseng doesn’t answer, the No. 1 ranking will be up for grabs.

Cristie Kerr and Paula Creamer aren’t in this week’s field, but they will both be teeing it up at the Honda LPGA Thailand next week. Fixtures among the top 10 in the world ever since the Rolex world rankings made their debut in 2006, Kerr and Creamer have both slipped out of the top 10. Kerr is No. 11, Creamer No. 13.

They’re both in pursuit of big years.

“Anytime a player wins a couple majors and four or five tournaments in a year, it’s hard to unseat them,” said Kerr, 35. “But it seems like Yani has had a little bit more inconsistency the last year. There’s definitely an opportunity to move up in the world rankings, but I think I would probably have to have a career year to get back to No. 1.”

“I’ve never made a secret of what I want,” Creamer, 26, said. “I want to be the No. 1 player in the world, and I’ve never been shy about wanting to be the No. 1 American. Yeah, it’s a motivator. It makes you work harder. I want to be in that spot. I know Stacy is in that spot and wants to keep it and hold it, but I can’t control what she does. I’m working hard. I can only control me, and how hard I’ve been working, and just getting the job done.”

“I’m feeling like maybe this is the year I can pull everything together and get on the right track,” Creamer said.

Kerr endured some frustrations last year, but she won the Lorena Ochoa Invitational in the second to last event of the season. It was her 15th LPGA title, her first since winning the LPGA Championship in 2010.

“Winning was huge for me, for my confidence, for inspiring me to work on my game in the offseason and for looking forward to the future, being hungry and excited,” Kerr said. “Golf is a sport where you can put in a lot of work and often not see a lot of reward. I’ve been fortunate, I’ve worked hard, and I’ve had a lot of success over the years. To have a period of time where I’m doing a lot of things right and not get a win, that was frustrating. You kind of want to lose your confidence a little bit. Winning showed me you have to persevere, you can’t lose the faith.”

So let the chase resume.