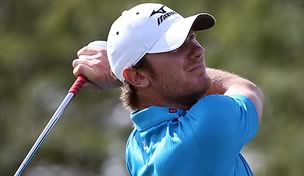 DOHA, Qatar – Chris Wood shot an 8-under 64 Friday for a three-stroke lead on Michael Campbell and two others after the third round of the Qatar Masters.

Wood started the day two shots behind Ryder Cup stars Sergio Garcia and Martin Kaymer, but moved up the leaderboard with five birdies on the front nine en route to a 15-under 201.

He had an eagle at the 10th when his second shot landed within 10 feet of the pin. He missed a short putt on the 12th for bogey, but had birdies on the 14th and 16th to match fellow Englishman Simon Khan, who also shot a 64 Friday for the low round of the tournament.

''I played pretty nicely. I wouldn't say it's one of my best,'' Wood said. ''I played similar to the way I played on Wednesday, the first round. Shot 67, could have been a few better.''

Khan joined Campbell (68) and Alexander Noren (66) in second place. The 486th-ranked Khan had six birdies on his first seven holes and finished with eight during his bogey-free round. He just missed a ninth birdie when his putt on the 18th came up short.

Garcia (70) fell into a tie for fifth with Brandon Grace (67) of South Africa, four shots behind. The Spaniard was in the hunt early thanks to several long birdie putts, but bogeyed the 15th and picked up a second bogey on 18 when his approach shot went into the water just left of the green.

''I can be a little bit disappointed with the score, but not with the way I played,'' Garcia said. ''Even the last shot, I thought I hit a nice shot, tried to draw it a little bit with a 9-iron and the wind just didn't hold it at all and unfortunately it went in the water. But, you know, we managed to make a good up and down for bogey. Hopefully, the putts that didn't want to go in today will go in tomorrow.''

Kaymer struggled to remain in touch with the leaders. The former No. 1 shot a 72 and was six behind. Kaymer had a birdie on the second but poor putting led to bogeys on the fourth and sixth holes.

''Very disappointing,'' Kaymer said. ''I thought I hit more good golf shots today, but putting was very tough. I missed I think a putt from a foot today, and one from 2 feet, and it's just difficult to stay positive on the golf course.''

The 142nd-ranked Wood is looking for his first European Tour win in his 115th event.