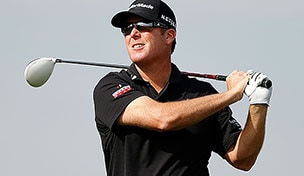 With benign conditions early Thursday at Redstone Golf Club, red numbers were flying during the opening round of the Shell Houston Open. Here's the skinny on Thursday's first round, where D.A. Points has a one-shot advantage among the early finishers:

What it means: Conditions were conducive to scoring early Thursday, with many of the lower scores coming from players in the morning wave. Increased winds in the afternoon put a premium on birdies, as only Rollins and Wheatcroft were able to crack the first page of the leaderboard among those who started late on Thursday.

Round of the day: Points was on fire from the start, opening with birdies on each of the first five holes he faced Thursday. He was 6 under after eight holes and 7 under after 12, ultimately carding nine birdies against a lone bogey at the par-4 fifth.

Best of the rest: Both Rollins and Tringale carded bogey-free 65s Thursday, and sit just one shot off the pace after the opening round. Rollins' round included four birdies during a six-hole stretch from Nos. 11-16, while Tringale carded five red figures from holes 7-12.

Biggest disappointment: Coming in off seven straight top-25 finishes, Hunter Mahan was expected to have a successful week in Houston. Instead, the defending champion made only one birdie en route to an opening 2-over 74 Thursday, placing him 10 shots off the lead.

Main storyline heading into Friday: Can some of the bigger names play their way into contention? Both Phil Mickelson and Rory McIlroy have their work cut out for them after 18 holes, having opened with rounds of even-par 72 and 1-over 73, respectively, while players such as Mahan and Brandt Snedeker may struggle just to make the cut after 2-over 74s on Thursday.

Shot of the day: At the par-5 fourth hole, Matt Jones was faced with 264 yards for his second shot to a green guarded by water. The shot posed no problem for the Aussie, whose lengthy approach ended up just 5 feet from the hole. The putt fell for an eagle 3, which helped Jones to an opening round of 4-under 68 Thursday.

Quote of the day: 'I thought maybe I'll pull this old putter out of the garage and maybe it will have some magic in it. Sure enough, today it did.' - Points, who made five putts of 10 feet or more during his opening round.