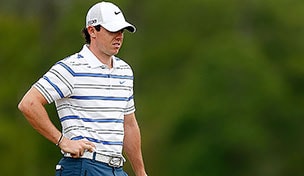 HUMBLE, Texas – Usually we journalists have to go searching for a story. Sometimes the story bumps into us.

I was walking through Redstone Golf Club, watching Rory McIlroy stumble to a 1-over 73 in the Shell Houston Open first round, when I ran into a pair of local golf fans who were both pretty knowledgeable about the young superstar, but owned totally dissenting viewpoints.

Optimistic Ollie and Pessimistic Pete are vocal and passionate about what’s going on with McIlroy and how it may affect him going forward. Armed with a few cold beverages – Ollie’s was half-full; Pete’s was half-empty – the two of them debated for 18 holes while I let my tape recorder take it all in.

OO: “Y’all are constantly analyzing this boy to the point where when he hits a good shot he’s terrific and when he hits a poor one he’s terrible. This ain’t air traffic control – he doesn’t need to be perfect all the time. Let him be.”

PP: “Hey, that’s his problem, not my problem. If he didn’t want to be analyzed so much, he should have thought about that before winning a few majors by eight strokes! We’re supposed to hold great players to higher standards, just like they’re supposed to hold themselves to higher standards. Answer this for me: What does Tiger Woods always say his main goal is before every tournament?”

PP: “Oh, yes, it is! Tiger always says his main goal is to get a W. Yup, a win. That’s all that matters. Well, you know what Rory said his main goal was coming into this week?”

OO: “I have a feeling you’re going to tell me.”

PP: “I have the exact quote right here: ‘I guess getting into contention is the main goal, try to have a chance to win on Sunday.’ I guess?! Contention?! He sounds like a player who hopes he can win rather than one who knows he can win.”

OO: “Hold on a sec, here. Since when is Rory supposed to be the next Tiger?”

PP: “Since he won two majors by eight shots before he could shave!”

OO: “That’s funny – almost. But I’ve always likened Rory’s ups and downs to those of Phil Mickelson instead. When he’s hot, he’s hot; when he’s not, he’s not. He’s never going to be a consistent performer like Luke Donald or Matt Kuchar. You remember when he missed three straight cuts last May, don’t you?”

OO: “And you remember what happened after that, don’t you?”

OO: “Allow me to remind you. Three months later, he won the PGA Championship. Then he followed by winning three of his next eight starts and taking Player of the Year honors on both major tours. So instead of doggin’ the guy, slow your roll, as the kids his age say.”

PP: “No, you’re right. He’s a tremendous player. Which makes me so angry to walk that front nine today and watch him play like a 6-handicap.”

PP: “He was on the right side of the fairway, just 147 yards out on No. 2, but airmailed the green and made bogey. Great players don’t do that! And on the eighth – the par-5 eighth, no less – he flared one into the drink and made double. I mean, who doubles a par 5?”

OO: “OK, but then what? Did ya fall asleep at the turn? Great players understand how to keep rounds from getting away and that’s what he did.”

OO: “Your tooth is gonna be hurting once I smack some sense into you. Since you seem to have forgotten, I’ll remind you that he birdied three of the next four holes to get back to even par.”

PP: “And then he bogeyed the next one!”

OO: “And then he birdied the next one!”

PP: “Hey, maybe he’d be more consistent if he didn’t go chasing the big bucks by signing with Nike. I’m no statistician, but breaking down the numbers, here’s my professional conclusion: Before Nike, he was really good. Ever since, not so much.”

OO: “Oh, come on. His specs are exactly the same as before. Maybe the new ball spins a little more at times or a little less at times, but don’t give me the whole “Nike’s equipment is inferior” bunk. Seems to be working alright for Tiger. Russell Henley and Thorbjorn Olesen have won this year, too. And next time Rory wins, I bet you’ll be the first guy putting new swoosh gear in your bag!”

PP: “Sure, but who knows when that will be?”

PP: “That’s funny. I don’t remember you walking around with a blindfold on all day, but you must not have seen everything I did.”

OO: “I saw everything I needed to see. His swing looks good, his putting is coming around and he’s working out all the kinks. With two weeks to go before Opening Day at Augusta National, he’ll be primed and ready for major No. 3.”

PP: “You sound like one of those cheesy Masters promos. But hey, just to prove I’m not all negative about our boy, I like him there, too.”

PP: “Win? Haha, no. But he’s got a hell of a chance to make the cut – if that tooth isn’t hurting too much. Now let’s go grab another drink. Mine is half-empty already.”