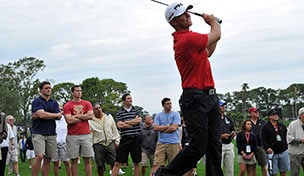 PALM BEACH GARDENS, Fla. – Rory McIlroy left before his round was even over. Tiger Woods had to rally just to stick around.

And with all that drama Friday in the Honda Classic, hardly anyone noticed that Luke Guthrie showed off his potential in a big way with a 7-under 63 to take a one-shot lead going into the weekend at PGA National.

Guthrie, pegged by many of his peers as a rookie worth watching going into the year, played bogey-free on another cool, cloudy day.

Of his seven birdies, perhaps the most impressive for the Big Ten champion from Illinois came on the sixth hole when he had mud on the side of his ball and was able to work the shot in from the right to about 10 feet.

After finishing his round, he walked into an interview room when someone mentioned that McIlroy walked off the course after being 7-over par through eight holes.

''I had no clue,'' Guthrie said. ''I was just kind of going about my business out there.''

He was at 9-under 131 and had a one-shot lead over Michael Thompson.

McIlroy, who missed the cut in Abu Dhabi and lost in the first round of the Match Play Championship in his previous two starts, made a double bogey on his second hole and rinsed two balls in the water on the 16th hole on his way to a triple bogey.

He hit his approach to the 18th in the water and never finished the hole.

He shook hands with Ernie Els and Mark Wilson and was on his way, but not before conflicting messages.

McIlroy told three reporters who followed him to his car that it was nothing physical but that he was ''not in a good place mentally.''

An hour later, he released a statement through his management company that he couldn't concentrate because of a sore wisdom tooth.

Woods looked as if he might join him. After mixing birdies with bogeys, Woods went bunker-to-bunker, over the green, short of the green and wound up with a double bogey on the 13th hole that put him one shot under the cut line with five holes to play.

He wound up with another 70 to make the cut on the number, nine shots out of the lead.

''I didn't quite have my game like I did yesterday,'' Woods said. ''I hit it much better yesterday, but I putted better today, so it all evened out.''

Also having a tough time was tennis star Serena Williams, following in Woods' large gallery. She took a picture of the 14-time major champion after his tee shot on the 17th and was scolded by security. The PGA Tour does not allow photos on competition days.

''Apparently u can't take pics. This security ... yelled at me,'' she tweeted.

A few minutes later, she posted the photo. And she finished with one last tweet: ''In my Defense peeps always take pics of tennis players.''

There was no reason to get a snapshot of Camilo Villegas, who joined a dubious list of PGA Tour players who went from first-to-worst. Villegas, playing primarily on sponsor exemptions this year because he lost his full status, opened with a 64 for his best start in more than a year.

The Colombian was 13 shots worse on Friday in a round of 77 that caused him to miss the cut. The last player to do that was Jim Renner at the Travelers Championship in 2011.

Thompson had a 65 and will play in the final group with Guthrie, the first time all year the PGA Tour will have twosomes on the weekend.

Boo Weekley held it together for another day and shot 67 to finish two shots behind at 133, along with Graham DeLaet of Canada.

Behind them was an impressive collection of players.

Geoff Ogilvy finally began holing some putts and shot 66 to go into the weekend three shots behind, along with Lee Westwood (68), Charles Howell III (67), Sean O'Hair (68) and Justin Rose (66). Ogilvy had not made a cut in his past four tournaments, dating to his season opener in the California desert.

''The worst I've hit the ball was today,'' he said. ''You chip in, hole a couple of long putts ... it's amazing how different it is when you hole good putts.''

This is a big weekend for the likes of Ogilvy and Howell, neither of whom is in The Masters. They have to win or move into the top 50 by the end of the month.

For players such as Guthrie, Thompson, DeLaet and Weekley, they are so far down in the ranking that only a win would get them down Magnolia Lane.

The road to the Masters suddenly looks like an uphill climb for McIlroy.

Nike introduced him with blaring music and a laser show in Abu Dhabi, but it's been all downhill from there.

In three tournaments, he has missed the cut in Abu Dhabi, lost in the first round of the Match Play Championship and withdrew after 26 holes at PGA National.

''His demeanor looks a little different,'' said Graeme McDowell, one of his best friends. ''I felt like he was a little off with his golf swing on the range. There were a few moans and groans coming from the bay next to me. It's normally a display. It's normally a clinic. It's superlatives coming from the coach and the caddie. That's the sign of a guy who's lacking a little technique in his swing and a little belief in his game.''

In the parking lot, McIlroy was asked three times if anything was wrong physically and he said no. Golfweek magazine reported he was near tears.

Then came the statement that it was his wisdom tooth, an apology to the Honda Classic for withdrawing, and hope that his game is about to turn the corner.

McIlroy, whose manners have been as impeccable as his swing since turning pro, faced criticism for his behavior for the first time in his career.

And while he couldn't wait to get off the course, this much probably didn't cross his mind. By quitting in the middle of a round, he is ineligible for the Vardon Trophy he won last year for having the lowest scoring average of the PGA Tour.