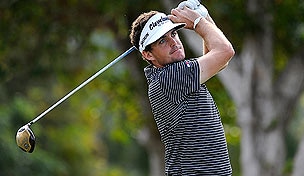 This week the PGA Tour heads to Honolulu for the Sony Open in Hawaii, the first full-field event of 2013. Each week, a panel of experts will offer up their picks from four groups of players based on Golf Channel's new fantasy game, Fantasy Challenge. We will also keep track of their scores and standings. The panel includes: senior writers Rex Hoggard, Randall Mell and Jason Sobel; contributors John Hawkins and Win McMurry; editorial director Jay Coffin; 'Morning Drive' host Gary Williams and staff writer Ryan Lavner.

Group 1: Keegan Bradley: On top of his stellar play in windswept Kapalua, he had a good start last season in the Aloha Swing starting with a middle-of-the-pack 16th-place finish at the TOC and a T-13 showing at Waialae. He also was sixth last year in par-5 performance, a key to the game this week.

Group 2: Charles Howell III: A horse for the course. He has a killer history at the Sony Open, with SIX top FIVES since he began competing in this event in 2002. Last year, he tied for runner-up honors (as he also did in 2007). I also look to his strong end to last season, where he closed with three consecutive top-15 finishes.

Group 3: Brian Gay: He opened his 2012 season at Waialae with a T-6 finish, one of four consecutive top 25s here. He also wrapped up the year on a high note in November with a fourth-place finish at Disney.

Group 4: Stephen Ames: He was off to a great start last year here, opening with rounds of 67-68-67, but a Sunday 75 pushed him down to a T-46 finish. Over the years he has picked up a nice paycheck at the beginning of the season, with five top-20 finishes and three top 10s since 2001.

Group 1: Zach Johnson: After a week on brutally long Kapalua, he'll be back in his comfort zone on a tighter, shorter Waialae track.

Group 2: Charles Howell III: He's been due at this one ever since getting gutted by Paul Goydos. Bonus: He often plays well in the early part of the season.

Group 3: Rory Sabbatini: Don't ask me why, but I can see a handful of title contentions for Sabo this year.

Group 4: Justin Leonard: This is the year he finally gets back in the winner's circle - and this ball-striker's course is a good place for it, especially if the wind blows.

Group 1: Webb Simpson: If not for last week's two false starts at Kapalua, which featured play being voided on consecutive days, Simpson could have conceivably started the week at the Sony Open looking to become the year's first back-to-back champion.

Group 2: John Huh: 2012 PGA Tour Rookie of the Year got off to a decent start at Kapalua, and despite an equipment change to begin his sophomore campaign he is poised to pick up where he left off.

Group 3: Russell Henley: Tough to pick a guy making his third career Tour start, but he was a two-time winner on the Web.com Tour last year and has the game (he was 24th in GIR last year) to compete at Waialae.

Group 4: Brad Fritsch: The only Web.com Tour graduate to improve his position with a tie for seventh at Q-School needs a fast start, like the rest of the Q-School/Web.com Tour category, to make the most of the abbreviated season.

Group 1: Carl Pettersson: Strangely streaky player at Waialae, and I'm hoping this year he breaks the trend. Since 2004, he has alternated a top-25 finish with a missed cut. Last year, he was T-2. Hope for more of the same this week, following up a solo eighth at Kapalua.

Group 2: Tim Clark: In 12 career rounds at the Sony, Clark has shot in the 60s in all but three rounds. He was T-2 here two years ago, and Clark's control game will always play well at a claustrophobic layout like Waialae.

Group 3: Brian Gay: Hasn't missed a cut at Waialae since 2000, has shot in the 70s only twice in his past 16 rounds there, and has been in the top 25 each of the past four years, including a T-6 there last year. Easy money.

Group 4: Patrick Reed: Ended his 2012 campaign with three top 25s in his last four starts, and then navigated through the final stage of Q-School to earn his card for this season. One of the game's most intriguing up-and-comers.

Group 1: Keegan Bradley: Seems ready to pick up right where he left off after leading the Tour in the all-around ranking in 2012. Was T-13 here last year and showed no signs of early-season rust in finishing T-4 Tuesday in Maui.

Group 2: Charles Howell III: Among players in this week's field, his track record at this event is unparalleled. Gunning for his seventh top-5 finish here since 2002 and eager to break a winless drought that stretches back to 2007. Finished T-2 here last year.

Group 3: Josh Teater: A player I have my eye on for 2013, and one that quietly ended 2012 in strong fashion with four top-10 finishes in his final nine starts. Has the accuracy (19th last year on Tour in total driving, 38th in GIR percentage) to contend on a tight track like Waialae.

Group 4: Russell Knox: Like Teater, a player that ended 2012 on a high note with three top-15 finishes in four Fall Series starts. After finishing fourth on Tour last year in GIR percentage and 15th in proximity to hole, the Scot has the game to challenge here and will be looking to make the most of limited playing opportunities this season.