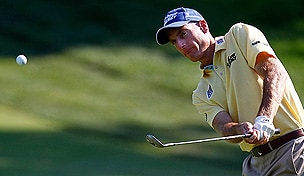 Getty Images
PITTSFORD, NY - JUNE 28: Michelle Wie of the USA stands by her bag during the final round of the Wegmans LPGA at Locust Hill Country Club held on June 28, 2009 in Pittsford, NY. (Photo by Michael Cohen/Getty Images)  -

This week the PGA Tour heads to Tampa, where the Copperhead Course at Innisbrook Resort will host the Tampa Bay Championship. in two different directions. Each week, a panel of experts will offer up their picks from four groups of players based on Golf Channel's new fantasy game, Fantasy Challenge. We will also keep track of their scores and standings. The panel includes: senior writers Rex Hoggard, Randall Mell and Jason Sobel; contributors John Hawkins and Win McMurry; editorial director Jay Coffin; 'Morning Drive' host Gary Williams and staff writer Ryan Lavner. They will also be joined by former 'Saturday Night Live' star Norm Macdonald, who will serve as a celebrity guest throughout the fantasy season.

Group 1: Luke Donald: The defending champion wasn't at his best at Doral, and he plans to meet with swing coach Pat Goss in search of a fix this week. But it wasn't Donald's swing that landed him the title in 2012, it was his putting (107 total putts).

Group 2: Martin Kaymer: The former world No. 1 said at the beginning of the season he's ready to take another run at the top spot, and he seems to be finding his old form following top-10 finishes in Abu Dhabi, Qatar and at the WGC Match Play.

Group 4: John Daly: Because you can never write Daly off completely, not with his freakish combination of power and touch. He showed more consistency last week in Puerto Rico (70-70-70-69) than he has in some time.

Group 1: Jim Furyk: He's the last player listed in Group 1, but he's certainly not an underdog at Innisbrook. Furyk won the event in 2010, lost in sudden death last year and also has a T-13 finish on his Copperhead resume these last three years. This is only the fifth start for Furyk this season, but he has two top 20s and hasn't finished worse than T-35. He's fifth on Tour in driving accuracy and ninth in three-putt avoidance.

Group 2: Scott Piercy: He's been really hot in 2013, with five top-25 finishes including a third-place showing in Phoenix. Against a strong field last week at Doral, he co-led in total driving and was 15th in strokes gained putting. He tied for fifth here a year ago with a 62 on Sunday.

Group 3: Kevin Streelman: He comes in off a missed cut in Puerto Rico, but I'm looking past that and focusing on the five pretty decent paychecks he's made this year, the biggest being from his tie for 10th at the Humana Challenge. He also finished T-10 at the Tampa Bay Championship a year ago.

Group 4: Erik Compton: The Florida native has looked good this year, racking up top 25s in half of his six starts. His best was in the Sunshine State at the Honda Classic a couple weeks ago. He tied for fourth, a career-best finish, which he concluded with an even-par 70 on Sunday, one of only four players to post four rounds of par or better that week.

Group 1: Jim Furyk: Perfect course for this past winner here to bust out in 2013.

Group 2: Michael Thompson: The guy's on a roll through the state of Florida, and his confidence is high.

Group 4: Boo Weekley: Still a terrific ball-striker, and the putter is coming around.

Group 1: Adam Scott: Coming off a torrid final round at Doral, expect him to keep it up this week.

Group 2: Geoff Ogilvy: Nearly broke through for a win two weeks ago; his long-awaited next W could happen soon.

Group 3: Ted Potter, Jr.: Florida legend from Ocala who knows what it takes to play these courses well.

Group 4: Ben Kohles: From Henley to Guthrie to Langley to Spieth to Uihlein, the kids have been alright. Time for Kohles to get his turn in the spotlight.