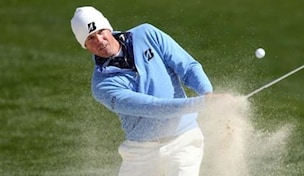 Kuchar closed out the match by executing a shot that most amateur golfers fear terribly.

Both Mahan and Kuchar were in the same fairway bunker on the 17th hole, but Kuchar was able to get his ball to about 3 feet from the pin while Mahan ended up in the desert.

As scary as bunkers can be for a lot of players, something about a fairway bunker can seem like a death sentence.

If you feel like you’re helpless every time your ball ends up in a fairway bunker, try these tips to get the ball out and on the green just as if you were in the fairway!

• The ball doesn’t know it’s in a bunker. Unlike greenside bunkers, a fairway bunker requires clean contact with the ball. So the next time you’re practicing fairway bunker shots, make sure the clubface is hitting the ball with little to no sand getting between the ball and the clubface.

• Quiet your feet for more stability and consistency. When I have a student who has poor footwork, I love having them hit full shots from a bunker. The loose sand under your feet requires that you begin with good balance and produce a swing with great rhythm and tempo. You may also try digging your feet in the sand to get a little extra stability. Just be sure to choke down on the grip the same amount your feet dig into the sand.

• Club selection is crucial. Most fairway bunkers have a lip that requires the ball to get in the air a little sooner than normal. Accept the fact that you may have to choose a higher lofted club to clear the edge of the bunker, which might leave the ball short of your target. Trust me, however, it’s much better to get the ball out cleanly than risk hitting the lip of the bunker.