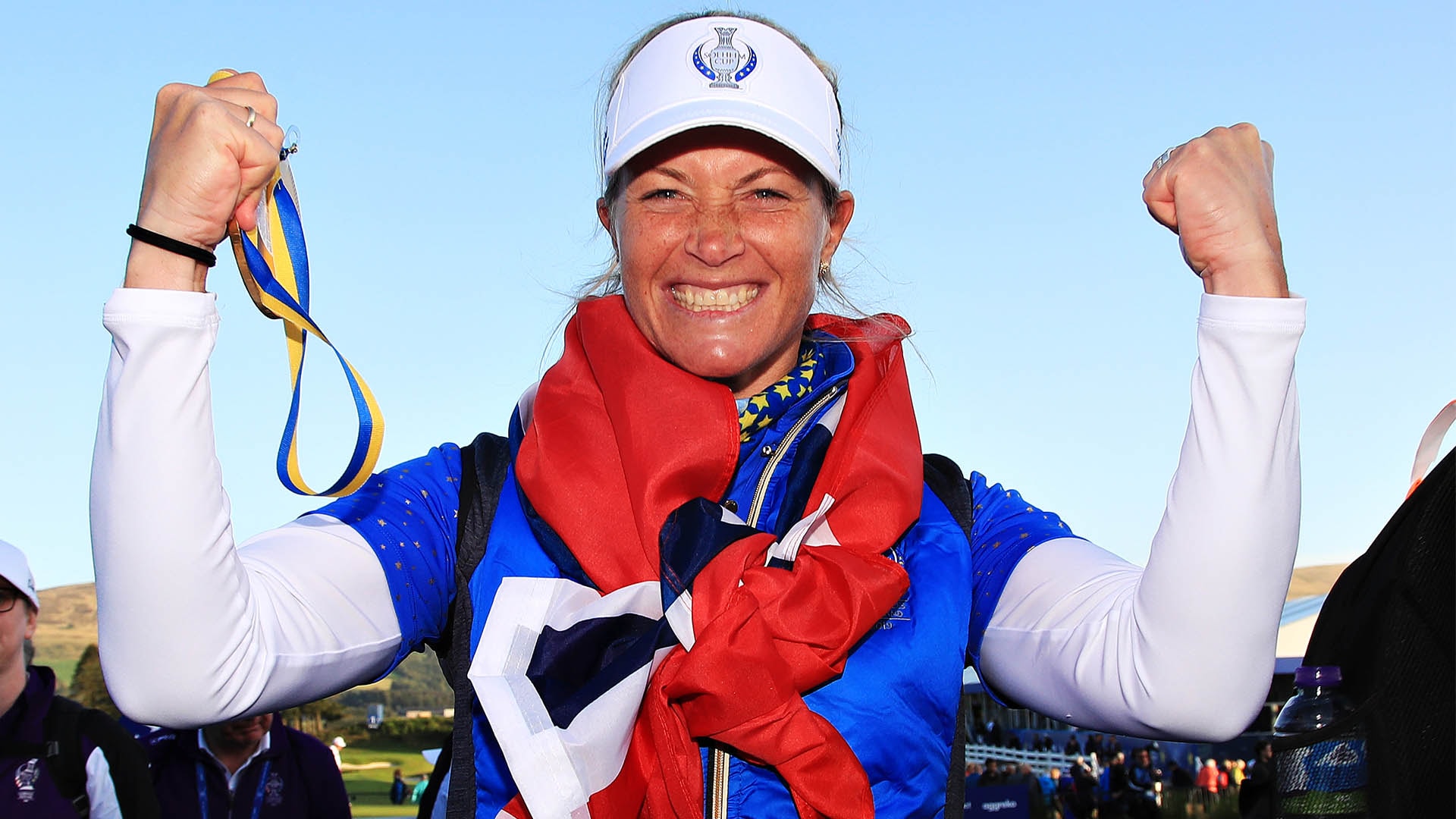 GLENEAGLES, Scotland – Who knew Suzann Pettersen was such a master architect?

It’s as if she had God’s ear Sunday at the Solheim Cup.

How else do you explain all the stars aligning to create one of the most spectacular endings in the history of women’s golf.

It’s not just the way Pettersen won the biennial international team event for Europe, with 12 matches coming down to her final putt in the event’s final match. It’s not just that it came in Scotland, the birthplace of golf, and it’s not just about the event.

After holing that 7-foot birdie putt to beat the Americans, and after being engulfed by jubilant teammates and adoring fans, Pettersen scooped and hugged her infant son, Herman . . .

And she figuratively rode off into the sunset.

She announced her retirement.

“I think this is the perfect closure,” she said after. “It doesn’t get any better.

“Yeah, this is it. I’m completely done.”

“I’m closing it down tomorrow, what more can I say,” Pettersen said. “I’m done.” 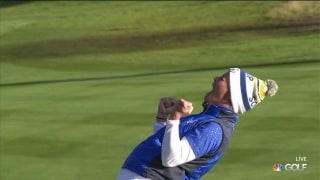 Pettersen clinches Cup: 'Can you ask for more?'

Suzann Pettersen tries to put her emotions into words after securing a European win at the Solheim Cup.

As endings go in sports, that’s as fairytale as the real thing gets.

It ranks up there with Rocky Marciano knocking out Archie Moore in 1956 in Marciano’s last heavyweight fight . . .

With John Wooden retiring after cutting down the nets in 1975 after leading UCLA to its 10th national championship in his final game as coach . . .

With John Elway winning the Super Bowl in 1999 with the Denver Broncos in his last NFL game.

“It's a dream come true to pull this off here in Scotland, in front of these crowds, for Beany, here at Gleneagles,” Pettersen said.

That’s another fantastic layer to the story.

Beany is Catriona Matthew, the European captain from Scotland, Pettersen’s friend and longtime teammate in these matches. Pettersen’s winning putt was a perfect ending for Matthew, too.

As Matthew and Pettersen both explained, the ending was part of a remarkable team effort.

So much had to happen so quickly in the end, to give Pettersen that last putt to win, it left everyone’s head spinning.

The Americans looked like a sure bet to close out the victory after taking a 13½ to 11 ½ lead. They had the Europeans’ backs to the wall with just three matches left on the course. The Euros had to win them all outright. They couldn’t afford to give up even a half point because the Americans would retain the cup with that.

Boom! Bronte Law defeated Ally McDonald, 2 and 1, when McDonald’s final 5-foot putt at the 17th hole to extend the match drifted away.

Boom! Pettersen holed her birdie to beat Marina Alex, 1 up.

The last two points came within minutes of each other.

Pettersen was taking her last practice swings before getting over that last putt when the last cheer for Law broke out in the distance, letting all those folks crowded around the 18th know that everything rode on Pettersen’s putt.

A miss and Alex was assured a half point to retain the cup for the Americans.

“It was absolutely perfect that it came down to Suzann,” said Europe’s Jodi Ewart Shadoff, who was wedged among teammates along the 18th green. “It was storybook. You couldn’t write it up any better.”

Pettersen, 38, has always been such a thorn in the side of the Americans.

She joined Matthew as heart and soul of the European Solheim Cup turnaround. With the rivalry sagging, with the Americans going for a fourth consecutive victory in Ireland in 2011, Pettersen and Matthew led the Euros to an upset. Pettersen was 3-1 that year. Matthew routed Paula Creamer, 6 and 5, to start the Sunday singles rally.

“Simply the toughest competitor I’ve ever come up against,” said England’s Laura Davies, who has won more points than anyone, European or American, in Solheim Cup history.

But, really, this ending’s better because nobody really knew if Pettersen still had what it takes to be here this week, if she wasn’t too old and too rusty to contribute, or if she even deserved to be here. 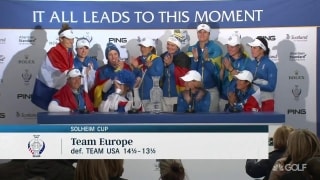 Pettersen confirms she's retiring: 'This is the end'

Suzann Pettersen has a free schedule starting tomorrow, announcing that this will be the end of her Solheim and professional career.

Pettersen was one of Matthew’s four captain’s picks, a controversial one at that.

But with her clutch finish Sunday, that’s all ancient history.

Pettersen wrote a terrific new final chapter for herself.

It’s a story she can tell her little boy when he’s old enough to understand just how all the stars lined up for her.