World Golf Hall of Fame member – and 15-time PGA TOUR winner – Fred Couples will join David Feherty on the season premiere of GOLF Channel’s Emmy-nominated original series, Feherty presented by Farmers Insurance®, on Monday, February 25 at 9 p.m. ET. Part I of a two-part interview with Couples, the premiere will kick off the ninth season of the series that initially debuted in 2011, for which Feherty has earned two Emmy nominations (Outstanding Sports Personality – Studio Host).

Filmed at Twin Dolphin Golf Club in Mexico – a new course that Couples designed – Part I of the episode will feature a wide range of topics, including:

Part II of Feherty’s interview with Couples will premiere the following Monday, March 4, at 9 p.m. ET on GOLF Channel. Other upcoming guests (premiering Monday nights at 9 p.m. ET) include: 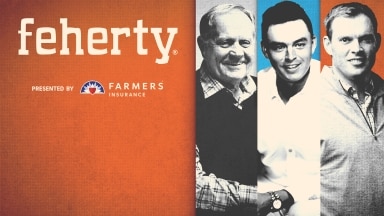