At a glance: Best of the best from API final round 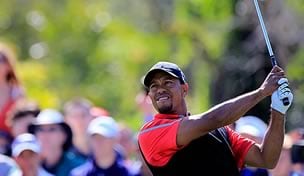 ORLANDO, Fla. – Tiger Woods had 16 holes remaining in the final round of the Arnold Palmer Invitational Monday and completed the task fairly easily by shooting 2-under 70, good for his 77th victory on the PGA Tour. It’s also the second time Woods won on a Monday this year – the Farmers Insurance Open was the other.

Here is the skinny following the day at Bay Hill, where Woods defeated Justin Rose by two shots:

What it means: Woods will move back into the No. 1 position in the Official World Golf Ranking for the first time since Oct. 30, 2010. It’s also the fourth time that Woods has won three PGA Tour events before the Masters. In the previous three times, Woods did not win the Masters (2000, ‘03, ‘08).

Best round: It’s too easy to give the nod to Woods because he won. Bubba Watson shot a 5-under 67 on Sunday to move from 41st into a 14th-place tie. Sure, the nasty weather arrived after Watson was done, but the conditions were no picnic. His blemish-free round included five birdies.

Best of the rest: Justin Rose coughed up the lead in dramatic fashion late Saturday in the third round when he bogeyed three of his last six holes. And Rose seemed well out of contention Monday morning, because he bogeyed two of his first three holes. But he made four birdies in the final 13 holes to finish alone in second place, two behind Woods.

Biggest disappointment: Fowler gave it a valiant effort Monday and got within two shots of Woods, but had a meltdown on the par-5 16th hole by hitting two shots into the water. Fowler didn’t hit a quality shot for the first seven holes, but still managed par on each. A birdie on the par-4 ninth hole gave Fowler momentum and a fighting chance at victory heading into the back nine. A bogey on the 15th hole unsettled Fowler and then he hit both his approach shot and next shot into the water fronting the green. The triple-bogey 8 was his undoing. Although Fowler tied for third place, his 73 was much better than the 84 he shot while paired with Woods last year in the final round of the Memorial.

Best shot: It had nothing to do with the eventual outcome, and it was actually struck on Sunday, not Monday, but Matt Every’s approach on the par-4 third hole takes the cake. Every hit his drive into the water left of the fairway, but he hiked up his pants, stepped in and got a swing on the ball. The result: a holed approach for eagle from 124 yards. The ball checked up about 8 inches behind the hole and rolled back in for an eagle.

Best shot, II: Give it to Sergio Garcia just for being Sergio Garcia. Again, it was on Sunday, but El Nino’s shot from the trees was unlike anything I’ve ever seen on a golf course. Of course, two holes later he withdrew because he was out of contention and knew weather was going to suspend the event until Monday morning.

Quote of the day: “I feel like this is the Tiger that I grew up watching.” – Keegan Bradley, who shot 71 and tied for third place.