Golf Channel Partners with San Jose State University and Topgolf to Televise the Western Intercollegiate, One of the Longest Running Events in College Golf

GOLF Channel, San José State University and Topgolf Entertainment Group today announced a multi-year partnership for GOLF Channel to televise one of the longest-running men’s collegiate golf championships in the country – the Western Intercollegiate presented by Topgolf – taking place at the historic Pasatiempo Golf Club in Santa Cruz, Calif. GOLF Channel will air live coverage of the 54-hole stroke play team and individual championship in primetime Monday and Tuesday, April 15-16, from 7-10 p.m. ET and on Wednesday, April 17 from 4-7 p.m. ET.

“Partnering with the Western Intercollegiate and Topgolf underscores GOLF Channel’s commitment to raising the profile of college golf and showcasing the sport’s future stars,” said Tom Knapp, executive vice president, programming and partnerships, GOLF Channel. “The Western Intercollegiate is one of the more distinguished tournaments in college golf that is rich in history, and we look forward to introducing our viewers to this championship and its iconic venue at the Pasatiempo Golf Club.”

"We are thrilled to partner with GOLF Channel and Topgolf on showcasing the iconic Western Intercollegiate men's golf tournament,” said Marie Tuite director of athletics, San José State University. “Our program and the Western Intercollegiate have long, rich histories connected to the sport of men's golf. We look forward to three days of challenging and outstanding golf and GOLF Channel's plans for unprecedented live college golf coverage. The Pasatiempo Golf Club is one of the best tests of golf anywhere in the country."

“We are honored to have the Western Intercollegiate televised this year with nine hours of live TV sponsored by Topgolf and televised on GOLF Channel,” said John Kennaday, San José State University men’s golf coach and Western Intercollegiate tournament director. “For 73 years, we have been blessed to have an amazing venue in Pasatiempo. To have the consistency of great, meaningful and historic players come through our tournament, it’s an honor and a labor of love for many of us.”

“We’re excited to sponsor the Western Intercollegiate Golf Championship – a tournament that, like Topgolf, brings a ton of energy and fun to the sport,” said Erik Anderson, executive chairman of Topgolf. “These collegiate players are the future of golf, and we can’t wait to watch them play with our Toptracer technology, the first-ever broadcast of the tournament with real-time ball tracking.”

The 2019 Western Intercollegiate presented by Topgolf field will include 13 elite NCAA Division I golf programs, highlighted by two nationally-ranked top 10 players – California’s Collin Morikawa (No. 2) and USC’s Justin Suh (No. 6), also the 2017 Western Intercollegiate individual medalist. Annually attracting several of the top college programs on the West Coast, the field boasts six teams ranked in the top-50 in the Golfstat rankings, including three teams currently ranked in the top-20 nationally: USC (8), Pepperdine (15) and Cal (17).

GOLF Channel will televise nine hours of live tournament coverage April 15-17, with replays in primetime on the West Coast. Golf Central, the network’s daily news show, will provide wraparound news coverage of the tournament, complemented by digital and social media coverage. Bob Papa and Curt Byrum will call the action from the broadcast booth. Steve Burkowski will report from an on-course tower, with Billy Ray Brown and 1996 Western Intercollegiate champion Arron Oberholser reporting from the course.

GOLF Channel is the television home for college golf, including the NCAA Men’s and Women’s Division I Golf National Championships, the East Lake Cup Collegiate Match Play Championship and the Western Intercollegiate presented by Topgolf. The network has provided live coverage of the men’s national championships since 2014 and the women’s national championships since 2015, which now are hosted at the same venue in consecutive weeks in May. GOLF Channel also presents the East Lake Cup, a three-day fall championship that invites the eight semifinalists from the previous NCAA men’s and women’s golf championships. The East Lake Cup is hosted at historic East Lake Cup Golf in Atlanta, Ga., and benefits the East Lake Foundation. In addition, GOLF Channel deploys its comprehensive portfolio of news, digital and social media coverage year-round in covering collegiate golf, including specials for regional and national qualifying and on-site and wraparound news from golf’s biggest college events.

Also in 2019, GOLF Channel will premiere season two of Driven, a four-part documentary series that will follow the journeys of the University of Alabama men’s golf team and their “Iron Bowl” rivalry with Auburn University as they look to return to the NCAA Golf National Championships in May. Season two of Driven will be co-executive produced by PGA TOUR superstars Rickie Fowler and Justin Thomas. 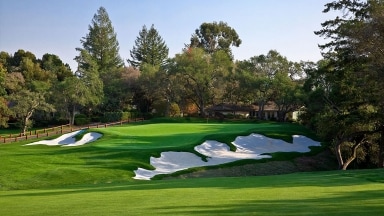 Golf Channel will televise the Western Intercollegiate, one of the most storied events in college golf, after announcing a multi-year deal Tuesday.