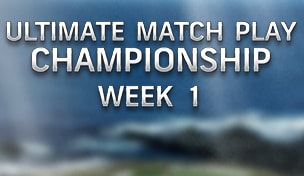 We’re taking fantasy golf to the next level.

We’re making a fantastic leap choosing the top 16 players in the history of the game and pitting them against each other in Golf Channel's Ultimate Match Play Championship.

Jack Nicklaus, Tiger Woods, Ben Hogan, Bobby Jones, Sam Snead and Byron Nelson are all on the fantasy range at Pebble Beach Golf Links, the host course to what promises to be the greatest competition the game has ever witnessed, albeit a totally imaginary affair.

While the GolfChannel.com staff picked the top 16 after a spirited debate and then seeded them, it’s up to YOU to determine who will win each match and who will reign as the Ultimate Match Play Championship winner. We’re rolling out electronic ballots before each round to allow you to cast your votes on who you think would win the designated matches all the way through to the finals.

Check out statistical bios for the 16 legends

The first round, quarterfinals, semifinals and finals will be rolled out one week at a time (each Tuesday) in the weeks leading up to the WGC-Accenture Match Play Championship. We’ll have game stories and photos in our coverage with the champion set to be unveiled on February 19, the day before the Accenture begins.

Yes, the notion of pitting Nicklaus against Jones, or pitting Woods against Hogan, is problematic. There’s no fair way to judge how greatness in one era compares with another – what equipment would they use? – but for those of you outraged that we’re even trying, take a deep breath. Relax. Or bite down hard on something. This is just for fun. This is just a little something to liven the conversation at the water cooler at work on Monday. In movie parlance: suspend your disbelief.

The Ultimate Match Play Championship is all about celebrating the wonder of greatness. It’s about probing the question of whether greatness is something that mostly resides in the heart and soul and whether that quality would adapt to whatever era or equipment a player was born into.

By the way, this competition will be waged with today’s equipment and with the players presumed to be at their best in their prime. The range at Pebble Beach has been busy for some time now with the game’s greats being fit and familiarized with today’s best tools.

Choosing the top 16 players was challenging. Somebody worthy is inevitably left out in these endeavors. Seeding in order of perceived greatness was also challenging, but here you go, here are our first-round matchups with player seeding in parentheses. It's now your time to decide who advances to Round 2: