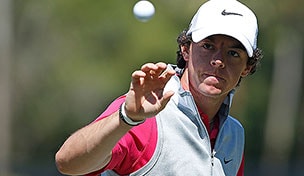 DORAL, Fla. – Rory McIlroy shot an opening-round 73 Thursday at the WGC-Cadillac Championship, a 1-over-par score that appeared was going to be much worse before he made two birdies over the final three holes.

This was McIlroy’s first round since walking off PGA National last week eight holes into the second round of the Honda Classic. He apologized Wednesday for poor behavior and admitted that he shouldn’t have WD’d despite being 7 over par on the day.

Considering the hurdles to start the season for McIlroy – a missed cut in Abu Dhabi, a first-round exit at the WGC-Accenture Match Play and last week’s WD – this was a good 73. Or at least, it wasn’t a terrible 73. McIlroy hit only 3-of-14 fairways and 11-of-18 greens and needed 31 putts. The leaders are at 6 under par.

McIlroy made back-to-back bogeys on Nos. 13 and 14 (he began his round on 10), birdied 15, then bogeyed the 18th to turn 2 over par. An eagle on No. 1 got him back to even par, but he then rattled off three consecutive bogeys. He birdied the seventh and eighth holes to salvage his round, one that provided stress at times he didn’t need.

“It was a bit of a struggle, to be honest,” McIlroy said. “Hit some good shots, hit some not-so-good shots. I've got another three rounds here to try and work on it a bit more and shoot a few good scores and we'll see what happens.

'It’s nice to sneak in a couple birdies on the last few holes and make it look somewhat respectable. It’s a work in progress.”