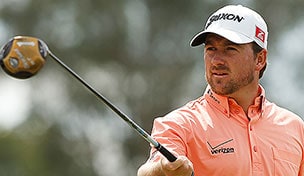 DORAL, Fla. – Graeme McDowell said what many have thought over the past 16 years.

“He was always kind of making me press,” McDowell said.

McDowell is not alone. And it’s safe to assume he won’t be the last to feel that way.

Woods and McDowell were paired together the last 36 holes. McDowell tied Woods for the tournament lead after six holes of the third round, but never was close after that.

McDowell birdied the first two holes of the final round, but Woods birdied two of the first four holes to keep his distance. McDowell said afterward that he had difficulty adjusting to the greens over the weekend and he faltered down the stretch, including a disappointing double bogey at the last hole to drop from solo third place into a third-place tie with three others.

“He was going to be tough to catch anyway,” McDowell said. “I would have had to be on top of my game 110 percent and I would have really had to putt it extremely well to keep pressure on him.

“All in all, I’m ecstatic the way I’m playing. No complaints.”